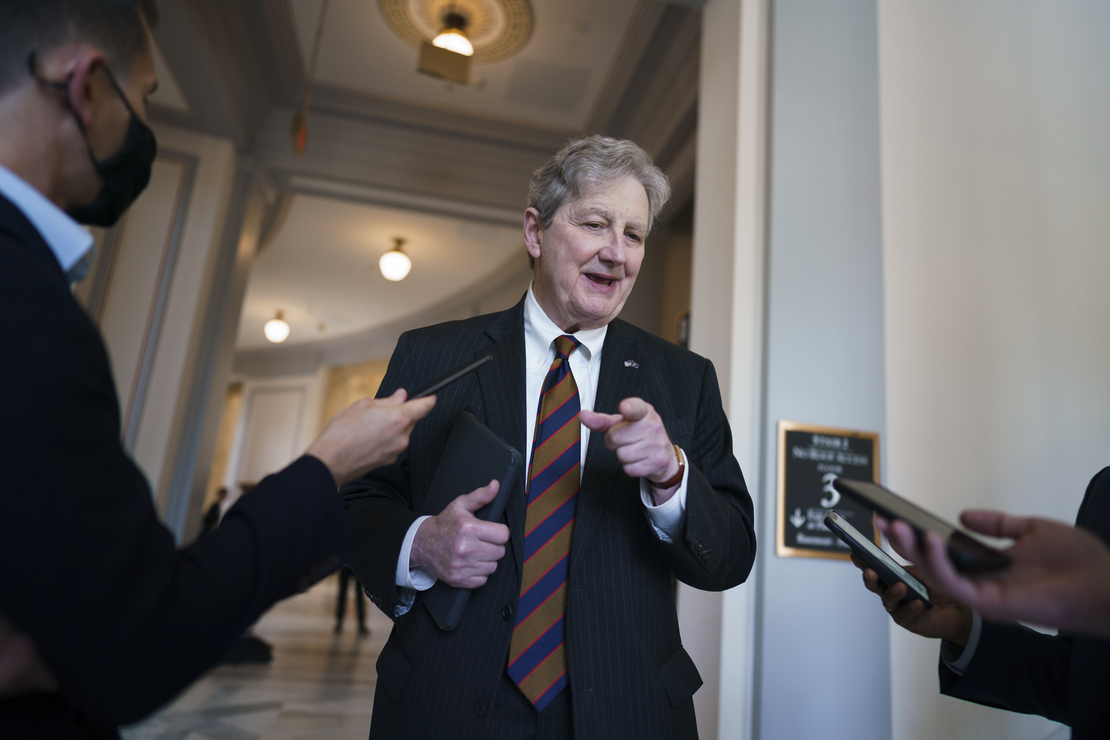 Sen. John Kennedy (R-La.) speaks to reporters in the Capitol. He is among a group of Republicans who support the Kigali Amendment to the Montreal Protocol. AP

The Senate could ratify a major climate treaty by the end of the week. And it’s being pushed across the finish line by conservative Republicans and industry.

The Kigali Amendment to the Montreal Protocol has long been a standout in U.S. climate politics. An unusual set of business and political realities have allowed the 2016 agreement — which sets a timeline for the global phase down of climate superpollutants used in cooling — to gain strong bipartisan support.

That could translate into a vote as soon as Wednesday to approve the amendment, which has been ratified by 137 countries. Scientists say it could help the world avoid a half-degree Celsius of global warming, a major step toward meeting international climate targets.

The remarkable coalescence of conservatives and progressives around Kigali follows years of unbending partisanship on climate policy, sinking nearly every major legislative effort to reduce carbon emissions in the United States. The treaty’s bipartisanship contrasts the Inflation Reduction Act, the biggest spending bill on climate ever passed by Congress. It found zero Republican supporters in the Senate this summer.

The Senate voted 64-30 Tuesday in favor of a procedural motion that tees up the final vote on Kigali. Even though many Senate Republicans voted no, skeptical of an international climate accord, the roll call suggested enough support for ratification.

The Constitution requires support from two-thirds of senators present. And industry representatives who have led outreach on Capitol Hill say they believe some of the senators who are supportive of Kigali were absent Tuesday. Of the six senators missing, four are expected to vote for Kigali, a Senate aide said (E&E News PM, Sept. 20).

U.S. industry is ardently supportive of U.S. ratification of Kigali, offering an influential — and rare — business ally to a major climate measure.

“They are activated,” the Senate aide said.

The roster of trade groups that have lobbied hard for ratification includes the cooling and refrigerating industry, the American Chemistry Council, the National Association of Manufacturers and the U.S. Chamber of Commerce.

The chamber and NAM each penned letters urging the Senate to ratify the deal. The chamber warned Monday that it planned to count the vote on its legislative scorecard alongside more traditional industry priorities, like free trade agreements, tax policy and nominations of judges and executive-branch officials who are deemed to be pro-business.

Meanwhile, individual companies have spent years cultivating the support of their home-state senators — many of whom are Republicans — to urge them to back both Kigali and the enabling legislation that cleared Congress in 2020 with bipartisan support.

Sen. John Kennedy of Louisiana was the lead Republican on the 2020 bill that passed as part of bipartisan energy legislation and which allows the U.S. to meet the Kigali targets. In an op-ed in the Washington Times with Senate Environment and Public Works Chair Tom Carper (D-Del.) earlier this year, he extolled the economic benefits of the treaty.

“This manufacturing boost will also be good for Louisiana, where plants in Geismar, Baton Rouge, and St. Gabriel could create more jobs and save hundreds of existing jobs by transitioning to production of safer coolants,” they wrote.

U.S. manufacturers say they have much to lose if Kigali fails to be ratified. U.S. companies developed and hold patents to the products that the world will use to replace hydrofluorocarbons.

These HFCs, which can be thousands of times more warming than carbon dioxide, are already being phased out in the U.S. under the 2020 law. But failure to formally adopt the treaty would lead U.S. companies to face export hurdles beginning in 2033.

As industry groups eye a potential win, they say Kigali provides a template for bipartisan action on other climate issues.

“You can achieve significant environmental objectives and significant economic objectives at the same time,” said Kevin Fay, executive director of the Alliance for Responsible Atmospheric Policy, an industry group.

“But it’s important to have a process that seeks to do that,” he added.

“Business likes predictability,” said Francis Dietz, vice president of public affairs for the Air-Conditioning, Heating and Refrigeration Institute. “They know they’re not going to get everything they want in life. But if you can get regulation that works for you, then you will take that over sort of a Wild West approach where different countries have different rules, and even in the U.S. different states have different rules. … That’s a recipe for disaster.”

The text of the 2020 American Innovation and Manufacturing Act, which gave EPA new authorities to regulate HFCs in line with Kigali, was modeled on past regulations for other chemicals controlled under the Montreal Protocol — a decades-old ozone treaty the industry was used to complying with. Industry helped shape the language of the agreement and the domestic law, which both aim for an 85 percent draw-down of the chemicals by 2036.

That long timeline could be a key to future climate legislation that might also garner industry support, said Fay.

Marty Durbin, president of the chamber’s Global Energy Institute, said the 2020 energy law was a better example of how to make climate policy than even the Kigali vote.

“The secret sauce with all of that was that you had bipartisan support for every part of that package that came through, especially in the Senate. And you had industry working for it,” he said. “I look back at, you know, the AIM Act and the Energy Act, and there’s your example of what’s needed in order to make progress on climate.”

HFC policy is a unique “kumbaya” moment between industry and the environmental groups that have frequently been at odds on climate policy, including on the pace at which emissions should be cut.

The road to Kigali began under the George W. Bush administration. By the time Kigali was brokered in the Rwandan capital in 2016, an established group of environmental and industry representatives had been working on the issue for a decade.

Environmentalists have stayed out of the spotlight in the run up to this week’s vote, preferring to let industry advocates carry the standard on Kigali. Several refused to comment for this story.

HFC reduction is unique in the pantheon of climate issues because it doesn’t involve fossil fuels. It also offers virtually no downside for U.S. businesses.

Kigali membership would help the U.S. keep illegal HFCs from China out of the U.S. market — a point Carper and Senate Foreign Relations Committee Chair Bob Menendez (D-N.J.) stressed in their floor speeches after Tuesday’s vote.

Paul Bledsoe, a strategic adviser to the Progressive Policy Institute, said there are similar areas of overlap for the climate and economy on other issues.

“There could be very similar types of opportunities in the United States, for example, in the export of liquefied natural gas if the U.S. can drive down methane emissions to the lowest in the world,” he said. “Our LNG exports can have a competitive advantage on climate grounds over those from other places, especially Russia.”