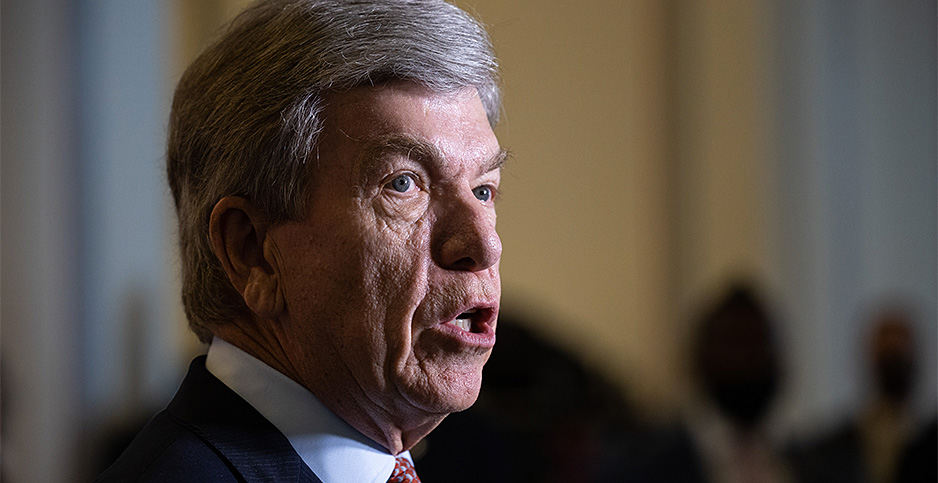 Many Republican senators still reject the idea of spending more federal money to electrify transportation, the biggest source of U.S. greenhouse gas emissions. That opposition sometimes comes from GOP lawmakers who’ve urged their party to take climate change more seriously — a sign of just how hard it will be for any bipartisan infrastructure bill to include climate policy.

Sen. Roy Blunt of Missouri, one of the Republicans negotiating infrastructure with the White House, suggested yesterday that a bipartisan spending deal could cover charging stations but not electric vehicles themselves.

"I think there’d be room for some sort of charging system where electric vehicles pay for the use of the infrastructure," the No. 4 Senate Republican told E&E News yesterday in a brief interview. "I think charging stations are fine."

The Biden administration has opposed paying for infrastructure through user fees, casting it as part of the president’s pledge not to raise taxes on anyone earning less than $400,000. But Blunt pointed to Transportation Secretary Pete Buttigieg’s congressional testimony last week in which he said private companies could play a big role in expanding charging stations.

"I think there are other ways to get to the charging stations," Blunt said. "Secretary Buttigieg mentioned earlier … maybe that could be a private investment. And I think it could be. So we’ll see."

Sen. Joe Manchin (D-W.Va.), who holds a key swing vote, offered a somewhat compatible view. Congress should make sure electric vehicles get the support they need, he said yesterday, "but we don’t have to fund it all."

Most Republicans have taken a different stance: Don’t fund any of it.

"For a person like me, from Iowa, if you have all electric cars there’s going to be 43,000 people making ethanol and biodiesel that won’t be employed," said Sen. Chuck Grassley (R-Iowa).

Such a range of complaints speaks to the challenge facing Democratic negotiators: addressing any one of those issues won’t necessarily bring along GOP lawmakers, who can still point to the other factors as reasons to oppose electric vehicle subsidies.

To be sure, some progressives say that’s the point. They dismiss the varied Republican complaints as a fig leaf for protecting the fossil fuel industry. Vehicles account for more than half of U.S. petroleum consumption.

Biden has made electric vehicles a pillar of his climate agenda. He proposed $174 billion for electric vehicles in his $2.2 trillion infrastructure plan. And he dug in on that funding level last week even as he trimmed his proposal down to $1.7 trillion.

Republican opposition to Biden’s electric vehicle plans runs so deep, it’s not clear if the GOP could actually deliver on the kind of compromise floated by Blunt.

Bipartisan infrastructure talks have been premised on overcoming the 60-vote filibuster threshold without Democrats resorting to party-line budget reconciliation. That would take at least 10 Republican senators voting for the package.

The disagreement on EVs reaches the highest levels of GOP leadership.

And Biden can’t count on deal-minded Republicans to go maverick.

Sen. Mitt Romney (R-Utah) rejected the idea of including electric vehicles in the infrastructure bill, even as he seemed to leave the door open to Blunt’s potential compromise.

"It’s very unlikely that Republicans, including myself, would vote to build electric charging stations. We have private enterprises that can do that," he said yesterday.

"As somebody said, Henry Ford didn’t ask the government to build gas stations for him," Romney added, referencing a quip earlier this week from Manchin. "So that’s not going to be part of our plan."

Instead, Romney said the bill should cut emissions by expanding mass transit and reducing traffic congestion.

One of the Republicans negotiating with the White House, Idaho Sen. Mike Crapo, declined to talk about the discussions. He doesn’t oppose incentivizing electric vehicles, he added, but it "depends on the proposal."

Wyoming Sen. John Barrasso, another member of Republican leadership negotiating with the White House, has been a vocal opponent of electric vehicle subsidies.

Sen. Mike Braun (R-Ind.), co-founder of the bipartisan Climate Solutions Caucus, said the electric vehicle transition would be a "monumental task" with a host of tough questions, like whether there would be enough charging stations or enough electricity to feed them.

But those questions aren’t for the government, he said.

"That obviously should be the private sector. And if you’re going to pass laws that are going to set goals towards that, they’ve got to be realistic — and I’m not a believer in that either," Braun said, adding that he thinks automakers have set electric vehicle goals that are "unrealistic."

"I think Biden is getting ahead of his skis," Braun said, adding that the U.S. is already on the "right trajectory" for emissions.

And Republican Sen. John Kennedy, whose petroleum-heavy state of Louisiana is among the most threatened by sea-level rise, said there was no role in the infrastructure package for electric vehicles or climate policy of any kind.

"That’s not infrastructure," Kennedy said, growing agitated as he was pressed on why charging stations don’t meet that definition.