Why the Bangladesh PM wants rich nations to pay up 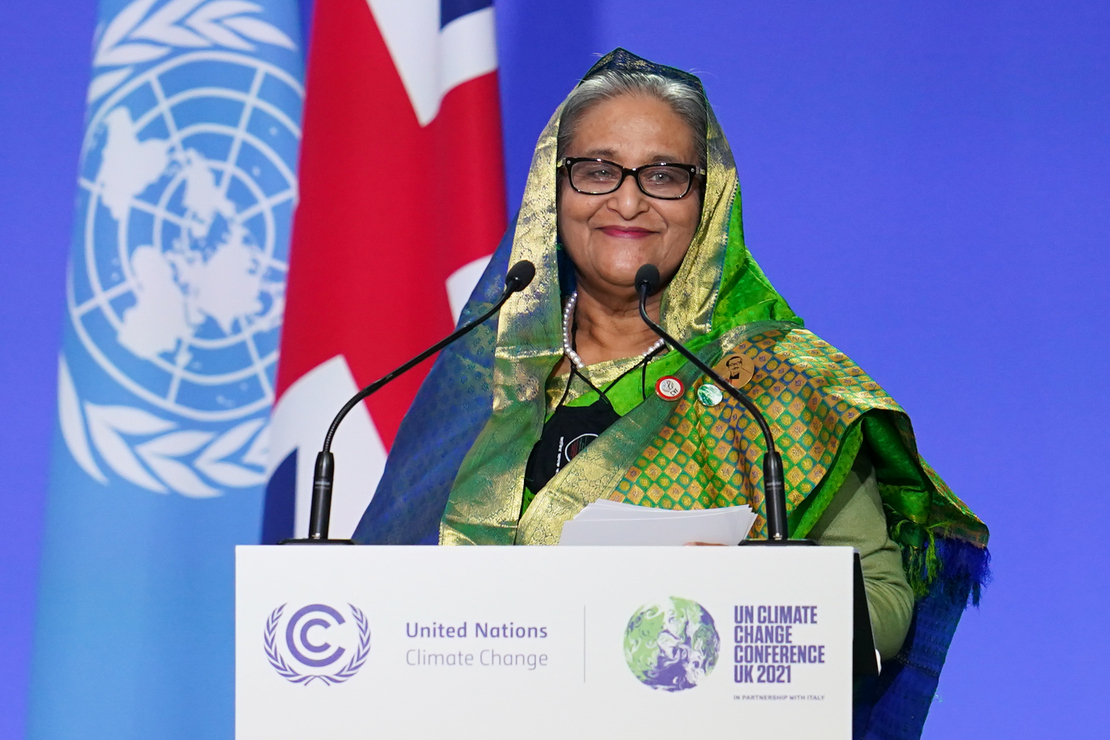 Bangladesh Prime Minister Sheikh Hasina knows that rising seas, flooding and extreme storms threaten to swallow up large swaths of her low-lying country. But she is determined to ensure that no one is forced to migrate because of a climate crisis they didn’t create.

“Our aim is that they should not migrate,” Hasina said in a recent interview. “But I’m telling you one thing: If the sea rises even 1 meter, many a small island country will vanish, and we may lose many of our islands and also some coastal belt.”

Hasina spoke to E&E News during a recent visit to Virginia to see her son and celebrate her 76th birthday. She had just wrapped up an appearance at the United Nations General Assembly in New York, where she railed at the world’s richest countries for not living up to their commitments to stave off climate calamity.

Those pledges and the money needed to help countries prepare for and recover from climate damages will be a central part of upcoming climate talks in Egypt, and Bangladesh is a leading example of what more countries could experience if climate promises go unmet.

Sitting in her hotel room, surrounded by a retinue of aides and advisers, Hasina expanded on that frustration. Wealthy countries have not delivered on promised support and financing, she said, and yet criticize vulnerable countries like Bangladesh for using coal as they struggle to ensure economic growth.

“All the developed countries, they already developed themselves. Now they’re going to blame us,” she said. “We also want to develop. We want to make sure that our people get their basic needs — food, education, shelter and job opportunities.”

Bangladesh, like many climate-threatened nations, contributes just a fraction — less than 0.6 percent — of the emissions warming the planet. But it is forced to bear the consequences as higher rainfall and melting glaciers increase the risk of flooding and erosion, while salt from rising seas contaminates farm soil and water supplies, putting a dent in the agricultural output undergirding the economy.

Crossed by several major rivers and home to a giant mangrove forest called the Sundarbans, Bangladesh consistently ranks among the countries most affected by rising temperatures.

Hasina has helped usher in rapid economic growth and improved climate resilience during her decade-plus as prime minister. She has also courted controversy: Her stance against migration extends to refugees who come from other countries seeking sanctuary. She recently called on the U.N. for help to repatriate Rohingya refugees from Myanmar that have taken shelter in Bangladesh, saying their prolonged presence has had ramifications on the economy and environment.

Rising food and energy costs stemming from Russia’s invasion of Ukraine also threaten her administration’s economic gains. And climate change impacts have become so severe that Bangladesh’s efforts to harden its resilience may not be enough.

When Hasina’s father, Sheikh Mujibur Rahman, became the country’s founding president in 1971, he implemented a program to build cyclone shelters and a nationwide system to warn of oncoming disasters, such as tropical storms or floods, she said.

But his grip on power became increasingly tight, and in 1975 assassins killed him, her mother and more than a dozen other relatives in a military-led coup. Hasina, who was outside Bangladesh at the time and unable to return for years, said she knows what it’s like to be a refugee.

Sea-level rise, flooding and erosion have already displaced millions in Bangladesh. The World Bank estimates that by 2050, more than 13 million people could be forced to migrate within the country in the absence of greater climate action.

Hasina has resisted that prospect since she became prime minister for a second term in 2009 and attended the U.N. climate summit in Copenhagen, Denmark.

After that year’s talks broke down, Hasina said she returned home worried but determined. She helped create a national climate change strategy, one of the first among developing countries, and set up a trust to fund Bangladesh’s ability to recover and respond to climate change impacts. The country currently spends around 7 percent of its annual budget on climate change adaptation, according to the Ministry of Finance.

It has also invested in mangrove restoration to protect coastal areas from storms and salinity-resistant rice that can be grown in soil with higher levels of salt due to seawater inundation — all part of a broader plan to make the delta region more sustainable. The country is also implementing a program to provide free housing to landless families.

“Everything I’m doing is on the basis of developing our villages,” Hasina said.

Bangladesh’s adaptation efforts have gained global attention and provided an example for other climate-vulnerable nations. As last year’s chair of the Climate Vulnerable Forum, a body of climate-threatened nations, Bangladesh launched a climate prosperity plan that aims to leverage climate action to boost economic growth, job creation and resilience. Countries in the forum are now adopting similar plans.

But the government has also come under scrutiny from international observers for its attempts to suppress environmental activism and its heavy-handed approach to fossil fuel protests.

Internal migration also is putting severe strain on the country’s crowded capital Dhaka, leading to concerns around security and sanitation.

“She doesn’t want people to migrate. She sees that as a failure,” said Saleemul Huq, a climate change expert and director of the International Centre for Climate Change and Development in Bangladesh.

He disagrees. While building resilience is important, he said, helping ameliorate the impacts of what’s coming is also necessary.

“I think we’re going to have to prepare, to enable people to migrate and support them,” said Huq.

In August, schools, banks and government offices were told to cut hours to save electricity, the Associated Press reported.

“We are buying energy, but at this moment it’s a really, really difficult time,” Hasina said. “That’s why I asked people that we should be very cautious and [not] misuse it.”

At last year’s climate talks, Hasina said Bangladesh aimed to increase the share of renewable energy to 40 percent by 2041 and had scrapped plans for more coal-fired power.

In the interview with E&E News, she emphasized another goal: fulfilling the country’s energy demands and providing people, particularly in villages vulnerable to climate impacts, with the benefits of electricity.

“Then we can establish many industries, good job opportunities. That will be a big help for us,” Hasina said.

The country still plans to ramp up renewables, but it is also building coal-based power plants that Hasina described as “mostly supercritical.” Some clean energy experts have warned that a continued dependence on imported energy will come with a cost.

Hasina said she wants developed nations to meet a lapsed pledge to provide developing countries with $100 billion annually up to 2025 to build more sustainable, resilient economies. Other leaders do, too.

Sameh Shoukry, Egyptian minister of foreign affairs and president-designate of upcoming climate talks in Egypt, said in a recent statement that the money was “more a symbol of trust and reassurance than a remedy to actual climate needs.”

But Hasina is hopeful that developed countries may be more willing to find a solution to the wide gap in climate finance after a summer when even rich countries were unable to outrun the effects of global warming.

One suggestion she offered: stop funding Ukraine’s battle against Russia’s invasion and put it toward helping vulnerable countries like her own.