Why the worst drought in U.S. history was a ‘climate surprise’ 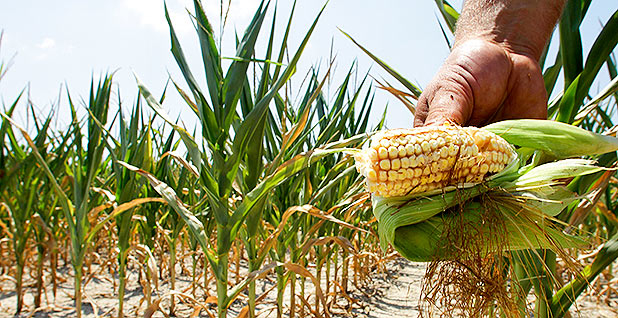 It was the most peculiar and damaging drought in U.S. history. As it parched the earth over U.S. breadbasket states from May through August, it caused $30 billion worth of damage. It cut normal precipitation by 47 percent; slashed the nation’s expected corn crop by 26 percent; and broke all drought records extending back through the severely dry Dust Bowl years of the 1930s to 1866, when the first records appeared.

To a number of atmospheric scientists, the need for more advanced prediction of extreme weather events falls under the heading of "news you can use." Anjuli Bamzai, a program director for the National Science Foundation, which supports NCAR’s efforts, noted in a press release: "Advance knowledge of a drought even a month or two ahead of time can greatly minimize the effects on society."

“We’re talking about the entire Earth, probably one of the hardest things you could possibly choose to model.”

Younger scientists, many of whom have spent the most time trying to pry predictions from mountains of data that are crammed into modern climate models, are among the more active players. Debasish PaiMazumder, the lead scientist on NCAR’s 2012 drought paper, had spent some time studying droughts in Canada.

"I’d say this is a case where the fire alarm didn’t go off," PaiMazumder said.

Asked about PaiMazumder’s conclusion, Hoerling went back into his files to consult the forecasts and the global and regional models used at the time. Although they hadn’t taken into account soil moisture on May 1, Hoerling still thinks the major factors of the drought were "not predictable."

"Summertime precipitation is very difficult to forecast skillfully in the context of a long-lead seasonal outlook. It’s a challenge for us not because summer rainfall isn’t well understood, but because advanced indicators for either wet or dry summers are not readily apparent over much of the country," explained Hoerling.

"In a lot of fields, there aren’t very many questions and a lot of people that are trying to answer them," said Karen McKinnon, who graduated from Harvard University in 2015 with a doctorate in earth and planetary science. "I would say in our field, it’s almost the reverse."

She said in an interview, "Have we overestimated the models, understated their errors? Yeah, I think folks from the modeling community are well aware of the limitations of their models. We’re looking at a very complicated system. We’re talking about the entire Earth, probably one of the hardest things you could possibly choose to model."

McKinnon has had her own challenges in making long-term predictions. She is one of the discoverers of what is called the Pacific Extreme Pattern, a cluster of high ocean temperatures in the northern Pacific that appears to be a way to forecast major U.S. heat waves, one of the nation’s deadliest extreme weather events.

"That’s the serendipity part. Once we started looking at the data, it popped out very quickly," McKinnon said.

It appeared to be the discovery of a new long-range forecasting tool, but, as yet, scientists don’t know why it is. NCAR has since hired McKinnon to help find out.

Another dangerous weather event that is still laden with mysterious fingerprints was tropical storm Patricia, which appeared off the coast of Jalisco, a state in the middle of Mexico’s west coast, on Oct. 22, 2015.

For reasons that are still not fully understood, Patricia had suddenly became a monster, unleashing the most powerful hurricane winds ever measured on earth in terms of one-minute maximum sustained winds. But when it slammed into Jalisco’s coast late on Oct. 23, Patricia had already begun to weaken and — fortunately for Mexico — was moving into a rural area with low population density.

Patricia’s still-muscular winds stripped Jalisco’s crops right off of farmland and sent rooftops spinning off of buildings and homes like so many Frisbees, but its winds and pounding rains caused only seven deaths. Had Patricia struck large coastal cities such as New Orleans or New York, deaths could have been in the thousands. In its weakened state, according to the Mexican government, Patricia still caused more than $323 million worth of damage. U.S. investigators reported an additional $52 million in damage across southern Texas, mostly from flooding.

What fascinated K. Ryder Fox, an undergraduate student at the New Mexico Institute of Mining and Technology, was that the sudden appearance of the strongest hurricane in history hadn’t set off any alarms. There was, he later reported in a study for Physics Today, no operational weather model that predicted the powerful growth of the storm. A suite of computer models he consulted contributed to what he called a "gross underestimate" of Patricia’s intensity.

Fox applied for an internship to study the matter at NCAR and was teamed with Falko Judt, an NCAR scientist, to see whether they could model the elements that formed Patricia on NCAR’s supercomputer, using an advanced model that compared 30 years of eastern Pacific tropical hurricanes. They injected the near-record ocean temperature levels and the extremely high moisture content they found in the vicinity of the storm.

Unlike most models that can focus on only very large weather events, their model had a high resolution, and they could watch parts of the storm that were only 1 square kilometer (39 percent of a square mile), roughly a third of Patricia’s size. They were startled to see signs of an extremely powerful hurricane that looked very much like Patricia begin to take shape on their computer screens.

"Because Patricia was so out of bounds," explained Judt, "we didn’t think our model would actually be able to capture its peak intensity. The fact that the model nailed it took us by surprise."