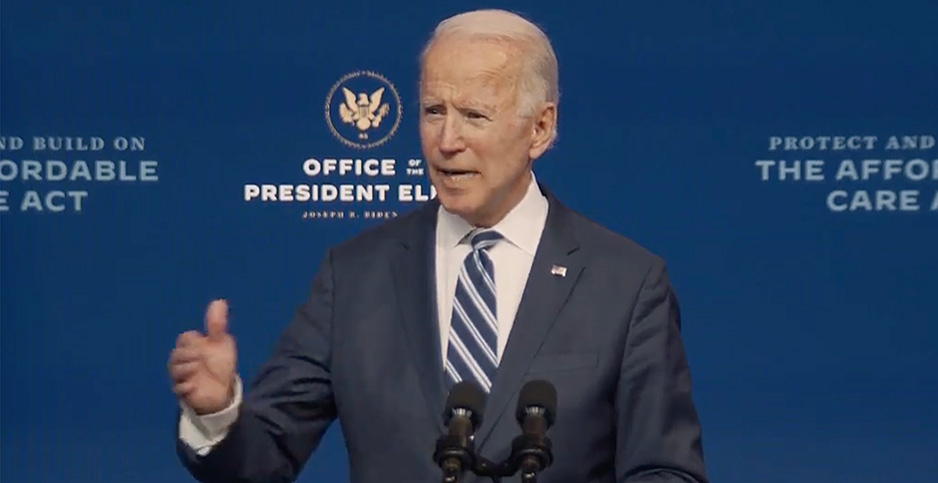 President-elect Joe Biden this week announced a sweeping list of experts to make up his transition team at agencies like EPA and the Interior and Energy departments.

But they have nowhere to go.

Yet increased use of remote communications technology and remote work because of the coronavirus pandemic may be helping Biden’s teams.

So far, sources say, those aides have not been able to enter government buildings in earnest, as the General Services Administration has continued to refuse to "ascertain" the election results.

A senior administration official called it "premature at this point" as litigation and ballot recounts continue.

President Trump alleges voter fraud, and his officials, like Secretary of State Mike Pompeo, have suggested there will not be a Biden administration at all.

House Democrats have threatened to sue, but the White House and agencies continue to charge ahead with business as usual.

An Office of Management and Budget spokesperson told E&E News: "We are in the middle of budget season."

But the president-elect doesn’t seem too worried. Earlier this week, Biden told reporters the Trump team’s defiance "is not much of a consequence in our planning and what we’re able to do between now and Jan. 20."

And in fact, the increased use of video calls and remote work has helped facilitate a transition where the outgoing president refuses to accept the results.

It’s not so critical that the teams be in the buildings themselves, sources said, because a lot of material is available in the public record.

"The remote situation is less of a constraint than an enabler," said Robert Shea, who worked on President George W. Bush’s transition team.

"The transition was already largely remote, and it’s something that likely allows surreptitious transition planning … to proceed," he said, noting that the secretive nature is "not ideal."

It looks much different from past years, when dozens of operatives crammed in a conference room to duke out high-profile issues on policy and personnel.

The Partnership for Public Service noted that the pandemic has created "several second order threats such as increased cybersecurity risks with remote workforce as well as greater global instability."

In May, GSA issued a report outlining transition procedures, including "alternate ways (e.g., remote, virtual) to fully deliver its statutorily required transition services in a way that mitigates the effects of the present national public health emergency on a potential transition of power."

But several days after the election was called by the media, the Biden team is still operating in the "pre-elect" phase, the agency confirmed.

Members of Biden’s personnel are allowed to use some office space at the Department of Commerce, where they have been for months, and they are undergoing background checks for security clearances.

An agency spokesperson said GSA will "continue to abide by, and fulfill, all requirements under the law, and adhere to prior precedent established by the Clinton administration in 2000."

Once GSA Administrator Emily Murphy can "ascertain" the results, that will free up about $6.3 million in federal funding for the incoming teams.

In 2000, the Bush team had to raise its own money to rent office space in Virginia to work on policies and budgets and hire the thousands of people needed to staff the federal government (Greenwire, Nov. 2).

Tom Pyle, who led Trump’s Department of Energy transition team, said they didn’t really "get started" until after Thanksgiving — "in part because it took forever for the Obama team to sign off on transition team members. There’s an FBI and White House vetting. It was very cumbersome to the point of obstruction."

Pyle said he thinks the teams might not actually go into federal agencies until the Electoral College meets in December.

Martha Joynt Kumar, a Towson University professor and expert on presidential transitions, said she thinks the impact of Trump’s defiance will depend on how long the uncertainty lasts.

Nick Loris, an energy policy expert at the conservative Heritage Foundation, said he doubts there will be huge consequences.

"The transition teams are full of former Obama officials and seasoned government vets," he said. "They know the agencies quite well and will have policy priorities laid out to hit the ground running."

Loris said, "I’m guessing there will be some information and personnel gaps, but doubt it will meaningfully slow the objectives of the agencies down."

A career EPA staffer at headquarters told E&E News it seems as if it is in "wait and see" mode. The EPA press office referred questions to GSA.

"The team is led by a director and composed of senior career officials from each major bureau and office throughout the department," he said. "They will continue to comply with all requirements under the law."