Why utilities didn’t join the Supreme Court case against EPA 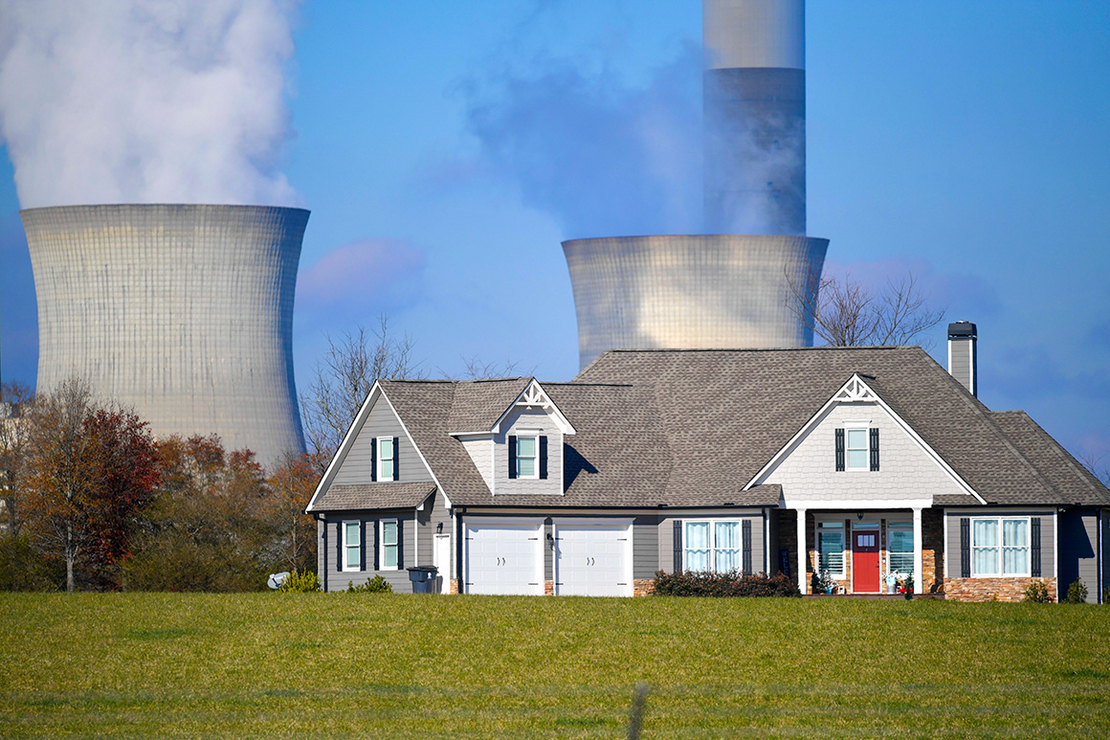 Coal-heavy utilities in years past filled court dockets with briefs warning that the Obama-era Clean Power Plan would hamstring their ability to provide reliable power and open a Pandora’s box of onerous regulations to stifle economic growth. But they are now voluntarily sitting out a case that seeks to ensure they never face a similar rule in the future.

The high court heard oral arguments last week in West Virginia v. EPA. Red-state attorneys general and coal companies argued before the court and in briefs that the now-defunct Obama-era rule still represents a threat. By advancing a reading of the Clean Air Act that allows EPA to count on fuel-switching and renewable energy when setting carbon standards for existing power plants, the petitioners argued, the rule threatens the availability of affordable power while infringing on the constitutional authorities of Congress.

Those threats persist eight years after the Supreme Court stayed the rule and more than two years after the Trump administration pulled it back in favor of a weaker standard, they argued.

Embedded in the Trump EPA’s gutting of the Clean Power Plan, or CPP, was a legal assertion about the agency’s Clean Air Act authority that could prevent future administrations from crafting carbon rules for industrial sources that go beyond the fence line of a power plant. It was that legal interpretation that ultimately led the U.S. Court of Appeals for the District of Columbia Circuit to throw out the Trump EPA rollback.

Now the Supreme Court is reviewing the same legal issue, at the urging of coal companies and Republican state officials.

A handful of electric cooperatives have sided with those petitioners. But most large utilities have stayed on the sidelines.

“Those necessary parameters are critical to prevent EPA from again exceeding its statutory authority by adopting a rule that unlawfully forces generation shifting,” Basin Electric Power Cooperative, the only utility-sector petitioner in the case, wrote in a brief.

A handful of other rural electricity cooperatives — which are owned and controlled by their customers, rather than investors — have sided with EPA’s critics in the case.

In an amicus brief, the National Rural Electric Cooperative Association and co-ops in states like Texas, Arizona and Kentucky said they would suffer financially if EPA is granted authority to issue rules requiring generation-shifting.

“Generation shifting for environmental compliance is either very limited or not an option for electric cooperatives,” they continued.

But the bulk of the utility sector is either sitting on the sidelines or has joined the Biden administration, green groups and cities in urging the court not to constrain EPA’s regulatory authority — at least not yet.

“The coal industry is obstructing climate progress, and the power industry is before the highest court in the land defending EPA’s authority to address climate pollution in a way that is meaningful,” said Vickie Patton, general counsel at the Environmental Defense Fund.

‘This would be chaos’

That represents a sea change from seven years ago, when investor-owned power companies led the charge in opposing the Clean Power Plan after it was introduced under President Obama.

Southern Co., Duke Energy Corp., Entergy Corp., NRG Energy Inc. and American Electric Power Co. were party to the legal challenges against the CPP between 2015 and 2017. The case resulted in a stay that gave the Trump EPA the opportunity to roll it back.

But those utilities aren’t petitioners in West Virginia v. EPA.

AEP in an emailed response to E&E News pointed to the company’s progress in renewable energy and energy efficiency, which it said had resulted in a 74 percent emissions cut over the last two decades.

“Our involvement in litigation depends on the specific issues in question and their relevance to our customers, investors and other stakeholders at the time they are raised,” said AEP spokesperson Tammy Rideout. “While AEP looks forward to gaining potential clarity on several issues related to the EPA’s regulation of greenhouse gases going forward, it will not impact our continued progress on transitioning to clean energy and reaching net zero emissions by 2050.”

Other onetime foes of climate regulation declined to comment for this story. But their investment decisions in the past decade tell a similar story — reductions to their coal-fired power fleet, more renewable energy and a shift toward gas.

Duke and Southern, the power sector’s second- and third-largest CO2 emitters respectively, have both made net-zero emissions commitments by 2050 and promised to cut their carbon in half this decade. NRG has plans to sell several of the coal-fired power plants it referenced in court filings as part of its past challenges to the Clean Power Plan.

While most of the utilities that once opposed the Obama rule haven’t joined the fray this time, the investor-owned utility trade association that represents them has filed an amicus brief in support of EPA’s regulatory authority.

The Edison Electric Institute (EEI) used its brief to raise concerns about what a Supreme Court decision on thorny constitutional questions raised by petitioners might mean for Clean Air Act regulation. Removing federal regulation, it warned, could clear the path for the reemergence of tort suits against individual power plants.

EEI and the National Association of Clean Water Agencies argued that the effect could be that “myriad litigants, instead of Congress, EPA, and the States, [would] attempt to dictate through all manner of injunctive relief the level of GHG-emission reductions that each stationary source must achieve.”

“This would be chaos,” the utility groups said.

Emily Sanford Fisher, general counsel for EEI, said on a briefing hosted by OurEnergyPolicy yesterday that litigation under common law would be both costly and lead to uneven greenhouse gas abatement requirements under various courts.

“I think some folks who are participating in that litigation think that without a rule, there would be no other driver for emissions reductions, and that’s not true,” said Sanford-Fisher.

‘Power plants … are on our side’

Power companies with investments in low- or zero-carbon technologies like nuclear energy have associated themselves even more strongly with EPA and its environmentalist defenders.

Consolidated Edison Inc., Exelon and National Grid USA were among the 10 utilities that challenged the Affordable Clean Energy (ACE) rule — the weaker Trump-era standard that replaced the Clean Power Plan.

Kevin Poloncarz, a Covington & Burling LLP partner who represented that coalition of utilities, said in an appearance at the Federalist Society that his clients weren’t happy with every aspect of the Clean Power Plan. But he said they supported giving EPA the flexibility it needed to allow a broader array of compliance options.

The D.C. Circuit Court’s decision to scrap the ACE rule, he said, “puts back on the table averaging, trading, all these traditional tools — which my clients love. They love efficiencies and they recognize if you’re given a target and you have the ability to have two units average you can do it more efficiently.”

Beth Brinkmann, a lawyer with Covington & Burling who argued on behalf of power companies, told the Supreme Court justices last week that power companies oppose the Trump-era rule because it confines emissions-capping measures to those at the source.

U.S. Solicitor General Elizabeth Prelogar, who represented the government in oral arguments last week, told the court that systemwide trading programs contemplated in the Clean Power Plan have reduced emissions when used in rules for other pollutants, like acid rain.

“It’s doing so in a very cost-effective way, which I think explains why the power plants by and large are on our side in this case,” she said. “They want that kind of flexibility because this is business as usual for them.”

Poloncarz of Covington & Burling said the sector’s investment portfolio had shifted in recent years, and with it its position on greenhouse gas regulation.

“It truly is that the Clean Power Plan ended up requiring nothing more than the market delivered in the absence of regulations,” Poloncarz said. “Whatever claims of overreach that industry had at that time — that this was forcing the industry in a direction that it wasn’t going — those were disproven by the fact that the 2030 target was achieved in 2019.”

The Obama-era rule aimed to reduce power-sector emissions 32 percent compared with 2005 levels by 2030. The power sector had shed 40 percent of its emissions by 2019 — mostly thanks to market conditions that favored natural gas, but also as a result of non-CO2 rules like EPA’s standard for mercury and air toxics.

A rule like the Clean Power Plan may also help companies recoup the costs of reaching their emissions reduction targets, said one utility industry attorney, who asked not to be identified in order to discuss client matters.

“If you’re an electric utility and you’ve made a net-zero commitment, a rule like the Clean Power Plan might actually help you get there,” the attorney said. “In terms of things like rate recovery for regulated electric utilities, if their costs of reaching net-zero are under a regulation, those costs are easier to recover.”

Steven Corneli, a former senior official with NRG, said that while much of the shift to lower-carbon alternatives is happening because of market forces, a standard that allows for fuel switching might accelerate that transition because utilities can sometimes recover costs.

Corneli said the economics of power generation have transformed in ways that weren’t anticipated seven years ago. For one thing, gas prices have stayed low, and coal has grown increasingly uncompetitive.

Instead, he said, utilities are switching to a mix of renewables and gas because they’re cheap and profitable.

“They want to get that stuff built while they can, rather than sort of try to hold back the tide like King Canute,” he said.

If the power sector has shifted in the last decade, so have the politics around climate change.

Industry observers say power companies may be reluctant to challenge EPA authority because they don’t want to contradict their public commitments to address climate change.

Another thing that industry insiders say has changed since the Obama administration is the makeup of the high court itself. It now has a 6-3 conservative majority, and utility-sector experts say their conversations with President Biden’s EPA team — including Joe Goffman, who has been nominated for air chief — show that the administration is well aware of the headwinds that a rule like the Clean Power Plan would face.

The agency is likely to limit itself, utility-sector experts say, rather than risk constructing another rule that never takes effect because it’s thrown out in court.

“I think if we were in a different world with a different Supreme Court, the utility industry might be differently aligned,” said one senior utility-sector official. “But I think the reality is we all can count votes, right? And the EPA in my conversations with them have been very honest about what they think they can get through the court system and what they can’t.”

EPA is expected to release a road map today of all the rules in the regulatory pipeline for fossil fuels-based power. While the agency has been careful to cast its power-sector strategy as an effort at transparency, it is also intended to show how the Biden administration can make progress toward its climate goals without sweeping greenhouse gas regulations.