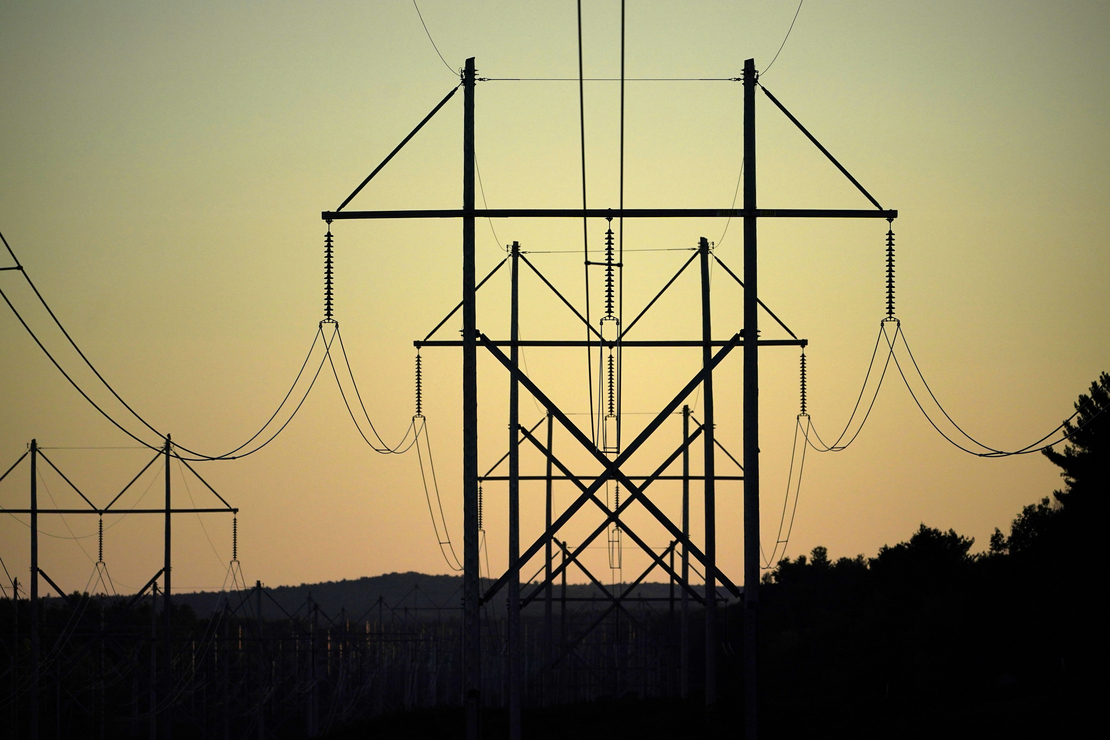 Next summer, grid operators will boost the power in a western New York transmission line whenever the wind is blowing.

The region’s utility, National Grid, has decided to take advantage of breezes, which cool lines that would otherwise heat and sag with increased power flows — potentially hitting trees. A new system of sensors will provide operators with real-time data on wind, temperature and humidity conditions.

The use of a so-called dynamic line rating system will open the door for more power to flow onto the grid from western New York wind farms.

“You get this wonderful coincidence of events,” said Jonathan Marmillo, co-founder and vice president of LineVision, the Somerville, Mass., manufacturer of the sensors. When the wind spins turbines, it will also cool the power lines, increasing their capacity.

That’s key as transmission struggles to keep up with growing renewable energy projects, in the race to meet President Joe Biden’s goal of a zero-carbon grid by 2035. The U.S. will need to double or triple its power line capacity, experts calculate — a daunting challenge when major transmission projects can take a decade or more to build.

But U.S. utilities have not welcomed dynamic line rating, or DLR, which could increase a line’s power-carrying capacity by 30 to 44 percent, according to a 2019 Department of Energy report to Congress. The reason is part bureaucracy, part apprehension — and part the utilities’ bottom line, according to analyses from federal agencies and experts.

“The U.S. provides transmission owners little incentive to deliver more power over existing lines or to reduce transmission congestion,” the DOE report said. Widespread adoption of DLR in the U.S., it added, would also “influence the performance of electricity markets, impacting the profitability or viability of specific generation sources.” In New York’s case, adoption of the technology will help the state meet its demanding clean energy goals, Marmillo said.

The DOE report also notes that DLR has enjoyed nearly a dozen successful pilot tests in the U.S., Europe and Canada. On top of smoothing the way for renewables, dynamic line rating can also save customers money by cutting down on the congestion charges — the increased costs that occur when cheaper power can’t get on crowded lines.

For National Grid, the upsides made the relatively easy upgrade a no-brainer. Its venture investment arm, National Grid Partners, is backing LineVision, whose sensors will be bolted onto transmission towers about 2 miles apart along a 30-mile, high-voltage line.

“Reducing the total congestion and allowing much more renewable energy to enter the grid is very valuable, without having to build new infrastructure,” said Lisa Lambert, president of National Grid Partners.

From static to dynamic

The nation’s utility sector and its regulator, the Federal Energy Regulatory Commission (FERC), are wrestling now over the use of weather data to increase the capacity of power lines. The issue centers on line ratings, the engineering standards grid operators use to determine how much power can safely flow over high-voltage circuits.

Nearly all U.S. transmission providers use a conservative standard called “static” line ratings to set the amount of power allowed to move over a power line. Such ratings are set for a season or for a year, ignoring daily or hourly weather changes that could boost a line’s power capacity.

Experts have repeatedly recommended a move away from static ratings. A 2019 report on transmission technologies from the consulting firms Brattle Group and Grid Strategies LLC, for example, compared static ratings to engineers fixing the highway speed limit at 40 mph in snowstorm conditions and then leaving that limit in place all winter or all year.

The R Street Institute, a think tank that supports free markets, argued in a statement to FERC that static ratings don’t reflect actual capacity “under the vast majority of conditions.”

FERC agrees. Last December, it issued a new policy directing transmission providers, with a few exceptions, to replace static rulings with new calculations of how much power lines can carry each hour, using up-to-date forecasts of air temperatures, with adjustments for daylight and evening hours.

FERC has also ruled grid operators must allow utilities that want to use dynamic ratings to do so, and it is seeking public comment on whether to require dynamic line ratings across the industry.

FERC Chair Richard Glick emphasized the need to “squeeze everything out of our existing grid” in announcing the December rule — and raised the prospect of adopting dynamic ratings “to further increase the efficiency of our grid.”

But in pushing for the new ratings policy, the commission faced strong opposition from parts of the utility industry, led by the Edison Electric Institute (EEI), representing investor-owned utilities.

The association argued that transmission operators, not regulators, should determine which line rating system to use. Some regions, it said, don’t get enough wind to cool lines significantly, making ambient ratings unnecessary.

The industry-backed Electric Power Research Institute also argued that the accuracy and reliability of DLR systems have not been established by “third party, unbiased” studies. That concern was echoed by ISO New England Inc., that region’s grid operator.

Among utility comments, New Orleans-based Entergy Corp. told FERC a “one-size-fits-all” regulation was wrong across a U.S. grid with vast differences in service areas and equipment. Advanced line ratings “should be used only when the benefits of that use are reasonably expected to exceed the costs,” Entergy added.

But FERC rejected those arguments, noting that ambient ratings are used today in the PJM Interconnection LLC, the 13-state grid region extending from the East Coast to Chicago, and by the Electric Reliability Council of Texas, the grid operator for two-thirds of that state.

FERC has also pointed to the cost benefits of a system that enables grid operators to avoid some of the price spikes that can happen when demand is high.

The price of congestion

Price increases in extreme weather can be brutal.

That’s because energy demand can skyrocket as people crank up the air conditioning or the heating. When cheaper power can’t get on the grid to meet that demand, operators call on “peak” power sources that are generally older, less efficient — and more expensive. The result is billions of dollars each year in extra charges to customers.

That dynamic was brought into full relief in February 2021, when Winter Storm Uri brought record cold temperatures to Texas and central U.S. states. Unprecedented power flowed through Midwest lines to the hard-hit region from the Eastern states that escaped the brunt of the storm.

The Midcontinent Independent System Operator, running the Midwest transmission system, relies primarily on seasonal and static line ratings. Lacking data on where more power could move on uncongested lines, MISO ran up $773 million in congestion charges in a few days during the storm, according to FERC staff.

With more data, utilities could boost power in some lines. And that could not only cut costs, but also help the clean energy transition, experts say.

Large wind and solar farms tend to be farther from customers than older coal- and gas-fired power plants, making them vulnerable to congestion. When lines are crowded, the renewables are at greater risk of having their output scaled back by grid operators, or “curtailed” in the industry’s lingo, she said.

“Congestion is a real risk and barrier to clean energy projects,” Donaldson said. If investors expect a project will be continually curtailed, she said, it can’t get financing.

Boosting capacity of existing lines could also help relieve the backlog in new generation projects awaiting permission to attach to power networks, according to DOE researchers and grid expansion advocates.

More than 1,000 gigawatts of new generation projects — almost all of it from wind and solar units — were stuck in line at the end of last year, unable to connect to the grid, according to an analysis by DOE’s Lawrence Berkeley National Laboratory. The delay in approval time is growing because of crowded connections.

“The transmission grid is pretty saturated,” said T. Bruce Tsuchida, a principal with the consulting firm Brattle Group who co-wrote the 2019 report on transmission technologies. Grid operators curtail output from wind and solar generation when lines run out of space.

“Developers look at the system. If they see their new project will be curtailed more than 5 percent of the time, they won’t build it,” he said.

But they are likely to keep their projects listed in queues of pending projects, hoping for conditions to improve. That makes the backlog worse, because grid managers tend to follow a “first-come, first-served” policy that awards connection rights to the oldest applicants, the DOE lab researchers noted.

FERC issued a proposed rulemaking in June intended to shrink the interconnection queue (Energywire, June 17). If made final, the rule would direct that projects be prioritized based on whether they are ready to go, rather than when they applied.

Other technologies that promise to expand the grid’s capacity have also struggled to win acceptance.

CTC Global Corp., for example, sells advanced transmission lines that enable utilities to boost the capacity of transmission by replacing the old lines on an existing set of towers. The advanced lines are twice the cost of conventional power lines. However, “reconductoring,” or restringing new lines on old towers, can be less than half the cost of building a new transmission line and towers along a new route, and escapes the hassle of getting a new system sited, approved and built, according to CTC.

On the CTC lines, current travels on aluminum conductors wrapped around a carbon fiber center rather than the much heavier steel cores used throughout the U.S. grid. The lighter core allows more aluminum in the line than steel lines carry, while keeping the weight of the cables the same, and that increases the amount of power that travels down the line.

The company has installed 75,000 miles of advanced cable worldwide, but only 12,000 miles of that is in the U.S., said David Townley, CTC Global’s director of public policy. That limited deployment is due to “outdated transmission planning practices and outmoded economic incentives,” according to a CTC-funded paper from Grid Strategies LLC.

“Why aren’t more lines reconductored?” Townley said. “Some of that is just inertia.”

It’s a cautious response to innovation in a conservative industry, he said. The advanced lines cost more money, and the payoff comes over time, through improved power flows and efficiency. It’s hard to sell electric industry regulators on that long-term value, he said.

Utilities are also financially rewarded for expanding their physical networks, he said. Revenues from their regulated rates of return generally increase when they have more physical assets, like power plants.

Many power companies thus prefer to add capacity by building an entirely new set of towers and lines, he said, rather than the much cheaper option of swapping out old power cables for advanced new ones.

“That’s the process. They’re quite willing to do what they’ve done for 100 years,” Townley said.