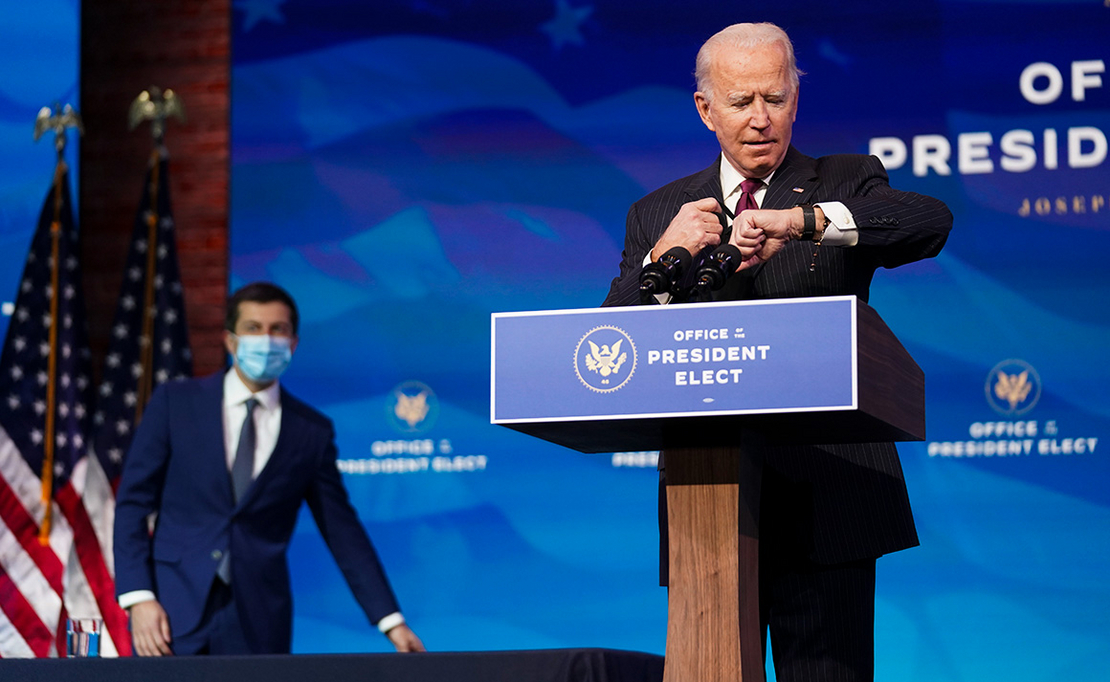 President Biden looks at his watch in December 2020. His first year in office is marked by numerous climate initiatives that have not reduced emissions. Kevin Lamarque/Pool via AP

President Biden took office by declaring he would answer the “cry for survival [that] comes from the planet itself.”

After delivering that line during his inauguration, Biden unleashed a blizzard of climate-focused executive orders. He rejoined the Paris climate agreement with the goal of cutting U.S. emissions in half by 2030. And he embedded climate teams across federal agencies, promising to marshal the entire government against a threat he called “existential.”

But Biden — and Congress — still are struggling to bend the trajectory of U.S. climate pollution. Greenhouse gas emissions ticked upward during Biden’s first year in the White House.

Much of that rise has to do with the U.S. economy reopening last year after widespread 2020 lockdowns. And emissions in 2021 were less than they were in 2019. But experts warn that U.S. climate pollution appears to be rebounding more quickly than the economy.

And with the biggest parts of Biden’s agenda stuck in Congress, the president is ending his first year much as he began it: churning out numerous, narrower climate policies — and hoping most of them stick.

The administration has finalized regulations on vehicle pollution, refrigerants and appliance energy efficiency. EPA has proposed rules to limit methane from the oil and gas sector. And the Interior Department has accelerated utility-scale clean energy projects, especially offshore wind.

Biden signed bipartisan infrastructure legislation that will direct billions of dollars to important parts of the energy transition, such has transmission lines and electric-vehicle charging stations. And internationally, the president has spearheaded a global methane pledge to cut emissions of the powerful greenhouse gas 30 percent by 2030.

The administration also suffered reversals on some policies, such as restricting new oil leasing on public lands.

Those actions, though, are eclipsed by the potential impact of the "Build Back Better" legislation’s $550 billion for clean energy, research and other climate policies. That bill is stuck in legislative limbo as Biden tries to win the support of Sen. Joe Manchin (D-W.Va.).

All of that has made it somewhat premature to pronounce Biden’s first year of climate action a success or failure.

If Biden passes his climate legislation in the coming months, experts said, his first year of painstaking congressional negotiations and legislative maneuvering will look much better in hindsight.

If not, then Biden’s 2030 climate goal probably falls out of reach, and prospects for his 2050 goal of economywide decarbonization start looking worse, too. The White House also could face second-guessing about whether congressional negotiations preempted more aggressive unilateral action.

“The administration accomplished a lot in its first year. I also think it fell short of its ambitions,” said Robbie Orvis, senior director of energy policy design at Energy Innovation.

He pointed to new initiatives from the Energy and Transportation departments to accelerate clean energy and charging station development.

“The administration knows Build Back Better is transformative. But they also know more needs to be done. And I think that’s why you’re seeing [them announce] all these other non-legislative things,” Orvis said.

Biden has done more to cut emissions in his first year than former President Obama did, he added. But the world’s dwindling carbon budget means it’s not enough just to be better than his predecessors.

In that way, climate change is not unique. Biden came into office promising to address what he called “four converging crises”: Covid-19, racial injustice, the economy and rising temperatures. Each of those problems remains stubbornly persistent.

The Omicron variant has sent Covid-19 caseloads to new records. Spiking inflation has overshadowed strong jobs growth. A fresh culture war has erupted over how racial issues are being taught about in schools.

And last year, greenhouse gas emissions rose 6.2 percent compared with 2020, according to a Rhodium Group analysis. That does leave emissions lower than 2019’s pre-pandemic levels. But the rate of pollution — pushed upward by transportation and coal-fired electricity — rebounded more quickly than the economy’s estimated growth of 5.7 percent.

“It turns out climate change is wicked hard and can’t be done in a year,” said John Larsen, a partner at Rhodium Group, who leads the firm’s climate work.

Compared with Obama, he added, Biden has moved more quickly and on more fronts.

Obama’s first year brought about $90 billion to address climate in the American Recovery and Reinvestment Act, along with EPA’s finalization of its endangerment finding on greenhouse gases, the scientific basis for regulating emissions of heat-trapping gases.

But carbon cap-and-trade legislation failed in Congress during Obama’s first term, and there was little movement on climate regulations, save for a voluntary agreement with automakers to improve fuel economy (E&E Daily, June 27, 2014).

Perhaps Biden could have moved more quickly on some draft rules, like restricting power plant emissions, he added. But that could have risked upsetting congressional negotiations at a time when Biden needs fossil fuel-aligned Democrats such as Manchin.

Biden’s climate shortfalls largely flow from those kinds of structural issues, Larsen said, so it’s not like much would change if a different Democrat were president, such as Washington Gov. Jay Inslee, a leading voice on climate. Congress would remain a serious obstacle.

"Sure, [Biden] is the president. But a lot of the big things that a president could do require other parts of the government to go along with it," Larsen said.

Below the radar, though, Biden has implemented more subtle changes that could bear fruit over time.

Perhaps most consequential are the climate officials now embedded within agencies and departments that historically have ignored climate change.

Under Obama, climate work was still mostly confined to EPA and the Energy, Interior and State departments. Now, even bodies such as the Securities and Exchange Commission are considering climate-related rules.

“This is different,” Larsen said. “There are teams in every department looking at any way to help solve the problem. And I don’t think we’re done seeing what those teams can do.”

Indeed, observers expect to see much more climate regulation from the Biden administration in the future — potentially making 2021 a quiet year by comparison. Some of those rules, like those for power plants, are highly anticipated.

“Domestically, some of the rulemaking has gone more slowly than we had hoped,” said Michael Gerrard, faculty director of Columbia Law School’s Sabin Center for Climate Change Law.

But that’s not a wholly negative development, he added. The Trump administration rushed out climate regulations — only to see many of them struck down in court.

“[Biden officials] know everything they do will be immediately challenged in court by industry and the anti-climate regulation states. So it’s very important to dot all the i’s and cross all the t’s,” Gerrard said. “That’s something the Trump administration failed to do, and so many of their actions were struck down in court. So the Biden administration is wisely trying to prevent that.”

At this point, Larsen said, Biden has cleared away enough of former President Trump’s regulatory legacy that his administration can focus on its own agenda.

“That rolling-back-the-rollbacks piece is fairly well accomplished. And to get that all done in the first year is kind of remarkable,” he said.

The prospect for climate legislation passing and federal agencies moving on to more substantial rulemaking means that “2022 could be actually the most important year from a long-term climate perspective,” Larsen added.