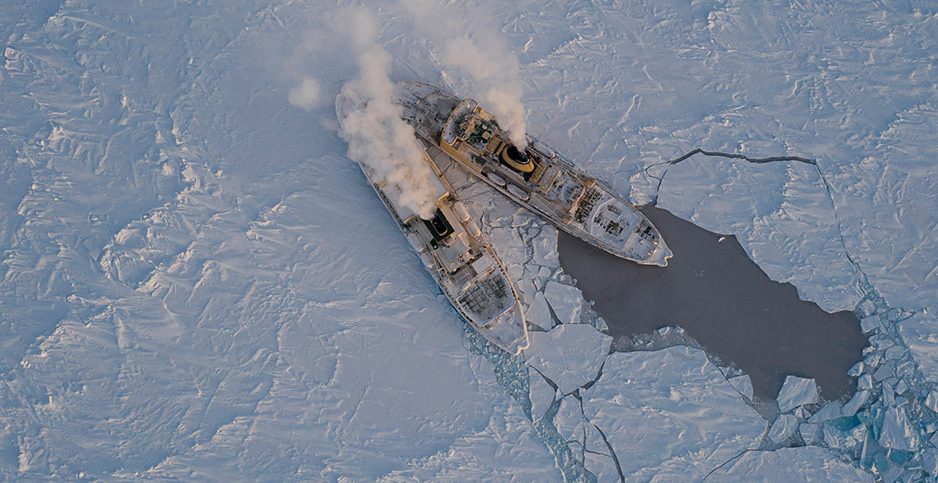 Two icebreakers in the MOSAiC Expedition rendezvous in the Arctic. Field missions to study climate change have suffered because of the coronavirus pandemic. Steffen Graupner/@MOSAiCArctic/Twitter

A remote corner of the Greenland ice sheet springs to life each summer.

Around 30 people, including scientists, doctors and engineers, fly in from all over the world at the beginning of May. They set up camp on the shining surface of the ice, constructing sleeping tents, work stations and community buildings.

They spend the next three months drilling into the surface to remove long, cylindrical cores of ice.

This year, the ice will be uninhabited.

Known as the East Greenland Ice-core Project, or EastGRIP, the site provides valuable data to climate scientists. Analyzing ice cores in a laboratory can reveal all kinds of information about the Earth’s past climate and how the ice sheet has changed over time.

The data can give researchers important insight into the progression of climate change. And it may help them predict what the future holds for the vast Greenland ice sheet, where accelerating ice melt is a growing contributor to sea-level rise.

This summer the camp will stand empty for the first time since 2015. Project organizers made the difficult decision to cancel the 2020 field season, citing growing alarm about the rapid spread of COVID-19 worldwide.

"At the end of the day, it’s a good thing," said Bruce Vaughn, a climate scientist at the University of Colorado, Boulder, and a participant in the EastGRIP project.

"You would take 30 scientists from a dozen different countries, stressed out, drag them through a bunch of airports to go up in the field, take them in a ski-equipped Hercules C-130 [aircraft], and drop them in the center of the ice sheet where they’ll be living in close quarters with each other and have limited ability to receive medical care or be evacuated," Vaughn said. "Thinking that through, it’s like — probably not."

The spread of the novel coronavirus has caused severe disruptions to everyday life across much of the world. Science is also being buffeted.

Universities and research institutes have begun shutting down their campuses. Many laboratories have temporarily closed, forcing researchers to delay projects. Many academic institutions are also restricting work-related travel, including research trips.

And scientific expeditions around the world are being postponed or canceled.

These are necessary precautions. Halting research trips prevents scientists from inadvertently carrying COVID-19 to new communities. It also eliminates the possibility of outbreaks at remote research camps where medical resources may be limited.

But it’s still a challenge for scientists — particularly earth scientists, including climate researchers, who rely on real-world measurements they collect in the field.

Expeditions sometimes take years to plan; rescheduling can be difficult or impossible, not to mention costly. They’re also time-sensitive — particularly climate-related projects, which are often deliberately scheduled for specific times of the year.

EastGRIP operations are expected to resume in 2021. Still, this summer’s cancellation will cause significant delays for some of the project’s major goals.

One of EastGRIP’s primary objectives is to drill a single, enormous ice core straight through the ice sheet, which is about 1 ½ miles thick. According to Vaughn, the team has drilled about 2,000 meters so far (around 6,500 feet) and still has 700 meters or so to go. Now, that will be delayed a full year.

Vaughn was also hoping to capture some atmospheric samples using drones this summer. He planned to take the samples back to his lab at the University of Colorado, where he analyzes gases in the air.

By land or by sea

The University-National Oceanographic Laboratory System, or UNOLS, is a nationwide consortium of academic institutions and national laboratories that operates research vessels and works to organize federally funded ocean studies.

UNOLS has ordered a 30-day pause for its research fleet, citing the logistical difficulties posed by international travel bans and concerns about the safety of scientists and crew.

That means some expeditions will be delayed or even canceled, according to Bruce Appelgate, an associate director at the Scripps Institution of Oceanography, which operates several UNOLS vessels.

"It’s really a shame that quite often the way that our ship scheduling works is if somebody isn’t able to sail according to schedule, that their project will just be canceled," he told E&E News. Ships are often booked for back-to-back expeditions months in advance, and they aren’t always available for rescheduling.

Anela Choy, a biological oceanographer at Scripps, is one of the lucky ones. She may still be able to reschedule her project.

Choy was originally set for an 11-day expedition in April on the Scripps-operated research vessel Sally Ride. She and her collaborators planned to study the marine ecosystem in the California Current, a major Pacific Ocean current flowing from British Columbia down to Baja California.

"I am interpreting it as a delay for the time being," she said, rather than an outright cancellation.

Still, even a delay could be a snarl in her research plans.

The trip was scheduled in April for a reason. The spring season is a major transition period for the ecosystem, bringing changes in ocean circulation, the flow of nutrients through the water, and the productivity of tiny plants and animals that form the backbone of the marine food web.

"That’s something that all ocean scientists and earth scientists try to pay special attention to — is when the physical environment changes, what happens to the biological response," she said.

Choy had planned a second trip to the same area later in the year. She’d planned to compare observations from the two trips to investigate how the ecosystem changes with the seasons. But if the April cruise is postponed long enough, she might not collect any spring observations at all.

"Who knows what will happen with whether or not that gets rescheduled — and if and when it does, if we’ll still be able to maintain that seasonal comparison," she said.

Early-career scientists may be some of the people most affected by canceled research trips, Appelgate said. These are researchers who are just getting established in their fields, often under a lot of pressure to produce research results.

"They’re doing great science, but they’ve got labs to manage, and their careers are really in the balance," Appelgate said. "Those are the people that we are really concerned most about with the impacts that we’re seeing."

Students, too, may be disproportionately affected. Canceled or postponed projects could force students to redesign their dissertations or theses and could even delay their ability to graduate.

Jordan Abell is a doctoral student at Columbia University specializing in paleoclimatology — studies of the Earth’s ancient climate. He had planned to travel to China’s Gobi Desert in May to collect rock samples for a project investigating how the region’s winds have changed over time. Evidence of erosion on ancient rocks can help scientists estimate wind speeds from the distant past.

He had to cancel the trip.

There’s been a silver lining, though. Abell has been corresponding with a fellow doctoral student in Wuhan, China, who got in touch after reading some of his earlier research. The other student has conducted some similar work in the Gobi, including some of the same kinds of observations that Abell had hoped to collect on his trip.

Now, the two are working together.

"That’s turned into a pretty fruitful collaboration between us," Abell noted. "We’ve been able to formulate three papers … during this downtime that we all have to write, combining our modeling efforts and his experimental work out in the field that he’d done over the past two years."

His situation is a best-case scenario in more ways than one.

Abell has had some other projects disrupted by lab closures at Columbia, and it’s unclear how long they’ll be on hold. Having other papers he can work on at home is helping him stay ahead.

For many other students, either a lab closure or a canceled research trip — let alone both — would be a major disruption to their studies.

Some projects are too big to cancel.

At this moment, a German icebreaker called the Polarstern is drifting across the Arctic Ocean, locked into a thick layer of sea ice with dozens of scientists on board. It’s been frozen in place since fall, largely isolated except for occasional visits from other icebreakers to exchange personnel and drop off supplies.

The Polarstern is the centerpiece of the MOSAiC Arctic expedition, an international science trip spearheaded by the Alfred Wegener Institute in Germany.

The Polarstern will drift across the frozen sea for more than a year, emerging somewhere north of Greenland in the fall. Scientists on board are collecting a wide variety of data as they float along, including everything from the formation of clouds to the behavior of tiny animals in the icy water.

Frozen in place at the top of the world, the ship can’t exactly return home during an emergency. And it’s due for a personnel swap in the coming weeks.

Replacement staff was originally scheduled to fly out of Svalbard, Norway, at the end of March. Small planes will carry them up to the Polarstern, landing on runways built right into the sea ice.

But the COVID-19 virus has thrown a wrench into those plans.

First, all prospective MOSAiC participants must be tested for the coronavirus twice before departure — once a few weeks in advance and then again shortly before leaving for the Polarstern.

Norway’s own travel restrictions may also cause delays. All travelers entering the country are required to quarantine for 14 days.

Realistically, that means the exchange "can’t possibly be" on target, said Matt Shupe, a researcher with NOAA and the University of Colorado and a co-coordinator of the expedition. It will almost certainly be delayed.

Science on board the ship should continue as normal, as long as the replacement personnel eventually gets there, Shupe noted. But other aspects of the expedition have already been compromised by the coronavirus.

A series of research flights scheduled for this spring have been canceled after a member of the flight team tested positive for COVID-19. The flights would have collected data on both the surface of the ocean and the atmosphere, according to Shupe.

"It gives this really nice additional perspective, spatial perspective, on measurements we’re making on the ship," he said. "So unfortunately we’re going to lose out on that."

Several more personnel and supply exchanges are planned for MOSAiC between now and the end of the summer. It’s unclear how they might be affected if the coronavirus continues to spread.

"That’s somewhat up in the air," Shupe said. "Right now, everything’s on target. Who knows what the travel restrictions are going to be like in a couple months?"

Scientists on board the Polarstern, though, may have a rare opportunity to disconnect from the events affecting the rest of the world. Isolated at the top of the world, there are far more immediate challenges.

With the onset of spring, for instance, Arctic sea ice is beginning to thin and break. That could pose a major issue for MOSAiC scientists conducting research on the surface of the ice.

It’s an extremely challenging [environment]," Shupe said. "There are so many factors that could affect the overall trajectory of the project."