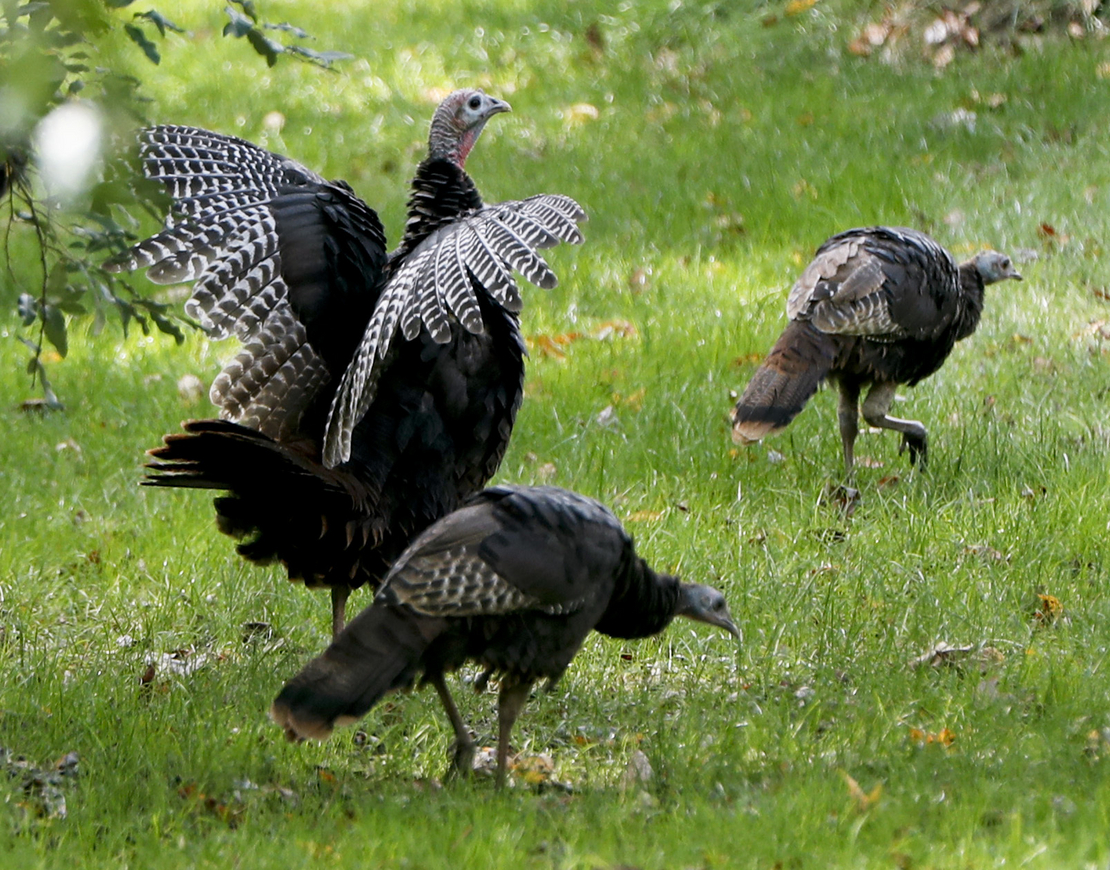 A flock of wild turkeys move through a yard in Zelienople, Pa. Keith Srakocic/AP Photo

The species survived European settlement, clearing of America’s native forests, the rise of industrial agriculture and unfettered hunting until the early 20th century.

Whether it can thrive in a quickly warming world remains an open question.

“It’s a big gap,” Tim Lyons, a scientist with Minnesota’s Department of Natural Resources, said of current research on the climate impacts on turkeys.

“We know climate change will impact all of our game bird species,” Lyons added. “What we don’t know is what these habitats are going to look like in 40 to 60 years. We should probably be thinking about that now instead of waiting until something happens.”

None other than Benjamin Franklin flattered the wild turkey in a letter to his daughter that extolled the bird’s American originality. “He is besides, though a little vain & silly, a Bird of Courage,” the statesman wrote, according to the Franklin Institute in Philadelphia, which has dispelled the myth that Franklin advocated for the turkey to become the national symbol.

Bon Appétit magazine once derided the turkey as a “wily, fast, lean bird, running and flying all over the forest and scrublands” — the kind of habitat that scientists say is undergoing changes as rising temperatures push plant and tree species north.

Anecdotal evidence suggests the wild turkey is holding its own. Just ask state highway departments, city traffic engineers and urban wildlife specialists. Reports of turkeys crossing roads and strutting through backyards are on the rise nearly everywhere, notably in the East and Midwest, where “turkey jams” are increasingly common.

Still, there are questions about the species’ long-term prospects. What looks like a healthy turkey population today — with an estimated 6.5 million nationwide — is actually declining, a condition that wildlife experts, conservation groups and hunting advocates are closely watching.

Experts note that the wild turkey population is falling at a quickening pace. Since 2005, it declined by more than 1 million birds, or 15 percent, according to survey data from the National Wild Turkey Federation. Between 2014 and 2019, turkeys saw a 3 percent decline, but officials caution there are significant data gaps due to inconsistency in state counting methods and reporting.

Mark Hatfield, national director of conservation for the National Wild Turkey Federation, said some of the sharpest declines have been in the Southeast, an area that is considered a stronghold for turkeys. The bird’s population is stable or slightly growing in most states.

Even so, experts say wild turkeys are seeing subtle shifts in habitat as the climate warms, potentially affecting their roosting, feeding and breeding behaviors. Their mobility has allowed them to survive extreme events, but habitat loss from drought, wildfire and insect infestation has wiped out millions of acres of roosting and feeding grounds.

“Losing those [habitats] and not having those essential elements on the landscape will exaggerate or compound the problem from warming temperatures,” Hatfield said. “If we’re unable to maintain a climate-resilient ecosystem, there’s no question turkeys will be negatively impacted.”

There are few academic studies on wild turkeys and climate change, but experts say the bird is changing along with its habitat. They are more heat tolerant than other species, but they are notoriously skittish and generally terrified by thunderstorms, which have seen an uptick in intensity across the Southeast and Southern Plains as warmer, wetter air from the Gulf Coast collides with weather systems farther north.

There is evidence that wild turkey populations are moving northward, and their numbers are rising from Minnesota to Maine and into Canada, where long winters with deep snowpack have traditionally been a hindrance to the birds, in large part because of inaccessible food like fallen berries and insects.

But as winters grow shorter and snowpack becomes less consistent, experts say turkeys will move to new areas with food. Not all of them will survive in those harsher environments, but the species nonetheless is becoming established.

Research published last year by biologists at Laval University in Quebec and the Woods Hole Oceanographic Institution in Massachusetts found that turkey migration was traditionally “limited by heavy snow that decreases winter survival” and that “a population of immigrant [turkeys] is projected to decline at the northern species range.”

The Oregon Department of Fish and Wildlife, which manages between 40,000 and 45,000 wild turkeys, said, “The number one killer of adult turkeys is prolonged winter storms, where crusted ice keeps them from finding food. But turkeys are tough, and can stay in a tree for several days, losing a good bit of body fat but still surviving.”

In Minnesota, which in the 2000s estimated its turkey population at 70,000, the birds are migrating north and west from their traditional range in the southern and eastern parts of the state.

“It’s because there’s some good habitat up there,” Lyons said. And fewer people.

Minnesota also happens to be nation’s No. 1 processor of raised turkeys — the ones likely to land on Thanksgiving platters. In 2021, the state’s farmers raised more than 40 million turkeys, followed by North Carolina at 30 million and Arkansas at 27 million birds. The United States also exported nearly 550 million pounds of turkey meat, with Mexico receiving the largest share by far.

Some food enthusiasts have a dim view of wild turkey, which can be tough and taste gamy. Bon Appétit has recommended “heritage turkeys” — farm-raised birds that, “like their wild forebears, have a big, intense flavor that commands attention, stands up to gravy, and makes for a memorable holiday feast.”

Other people wear camouflage and blow into a turkey call.

“It’s a very healthy bird,” said Hatfield of the National Wild Turkey Federation. “Many times, for hunters that’s their primary effort, to ‘source food for my family,’ Many more hunters are coming into the recreational aspect of it because they want local, organic, non-processed foods on the table.”

The average wild turkey provides roughly 8 pounds of edible meat, according to the federation. When multiplied by the average annual harvest of 700,000 to 800,000 birds, “that’s up to 6.4 million pounds of meat right there,” Hatfield said.

Hatfield puts his money where his mouth is. His family’s Thanksgiving turkey was harvested by an uncle about 5 miles from his grandmother’s Kentucky farm, where they will gather tomorrow.