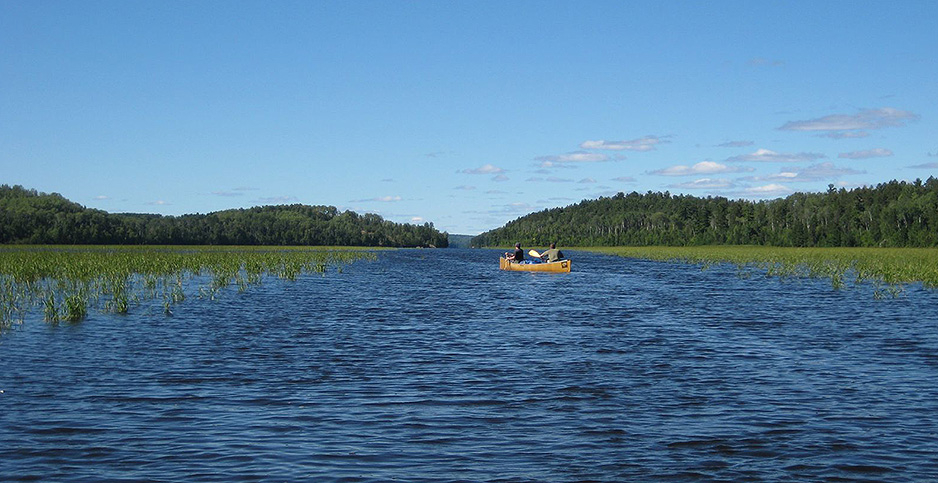 The Boundary Waters Canoe Wilderness Area, which straddles the Minnesota-Canada border, is at the center of a dispute over a mining project. Greg Walters/Flickr

At 91, Walter Mondale endured a seven-hour drive and a short flight in June to go fishing on Canada’s Elsie Lake, deep in Ontario’s wilderness.

It’s a yearly trek for the former Democratic vice president from Minnesota, who spent much of his long public career fighting to protect the wilderness areas he calls "a precious, almost sacred part of American life."

Thirty-five years after his failed presidential run, Mondale has a new battle: Prevent the Trump administration from allowing a Chilean-owned company to open a copper-nickel mine near the Boundary Waters Canoe Area Wilderness in the northeastern tip of his home state.

"They’re just going at it every day, and it’s sickening," he said in an interview. "There’s a strong element of this current Republican Party that just detests anything done to defend the environment. … They’re wrong politically. And if this is the way they’re going to keep at it, the public’s going to turn against them. Most people realize we need to protect the environment."

The yearslong slugfest in Minnesota over the mine is just one of many high-profile wilderness fights featuring familiar foes. Environmentalists and their allies want to preserve and expand wilderness areas before more land is developed. Their opponents want more jobs and more recreational access before too much property gets locked up.

"There’s no doubt there’s an assault on public lands right now," said Tom Landwehr, the former commissioner of the Minnesota Department of Natural Resources and the current executive director of the Campaign to Save the Boundary Waters. "And while it may seem like what’s happening at the Boundary Waters is a local issue, it really is part of this larger pattern across the country of attacks on Grand Canyon and Yellowstone and everything else."

Fights over wilderness are taking place on multiple fronts.

A major clash involves opening up public land to biking. In May, Utah Republican Sen. Mike Lee introduced a bill that would allow mountain bikes in wilderness areas. Lee, who backed a similar bill in 2017, wants to "enrich Americans’ enjoyment of the outdoors by expanding recreational opportunities in wilderness areas."

Interior Secretary David Bernhardt joined the fray in August by signing an order to force the National Park Service and other agencies to allow e-bikes to be used in any place a regular bike is permitted to go. Bernhardt said the order would simplify and unify bike rules on public lands while also decreasing the "regulatory burden."

Other fights are over access to public lands. In June, a coalition of outdoor groups sued the Forest Service to gain access to trails in Montana’s Crazy Mountains. They complained that they had been denied the use of trails due to "the illegal and obstructive actions" of nearby landowners.

And another mining conflict is brewing in northern Arizona. In July, the House Natural Resources Committee passed a bill aimed at protecting the region from new uranium mining claims. Rep. Raúl Grijalva (D-Ariz.), the panel’s chairman, said it was time to end "these cycles of fighting over whether to protect the most sensitive places on Earth."

The battles come after Congress voted in February to designate another 37 new wilderness areas in California, Utah, New Mexico and Oregon, bringing the total in the country to 803. Lawmakers declared another 1.3 million acres of land as wilderness, giving it the highest protection afforded to any parcel of public land. Trump signed the bill, increasing the total acreage in the United States to more than 111 million, a mass roughly twice the size of Minnesota (Greenwire, Feb. 15).

Democrats now want to add more land to the wilderness system, promoting bills that would protect new sites in California, Colorado and Washington.

One of the largest proposals, sponsored by California Democratic Rep. Jared Huffman, would create eight new wilderness areas and expand nine others in the Golden State. Huffman, the chairman of the House Natural Resources Subcommittee on Water, Oceans and Wildlife, said he wants to protect ancient redwoods and "some of the most majestic landscapes and biodiverse ecosystems in California."

As the fights intensify, one word matters most: "untrammeled."

When Congress passed the landmark Wilderness Act of 1964, lawmakers defined wilderness as "an area where the earth and its community of life are untrammeled by man, where man himself is a visitor who does not remain." The law bans the use of motor vehicles and motorized equipment, along with motorboats and other forms of mechanical transport.

Wilderness groups trace the definition of "untrammeled" back to the man whom many regard as the architect of the law: Howard Zahniser, the former executive director of the Wilderness Society. According to historical accounts, he convinced Mondale’s mentor, former Democratic Vice President Hubert Humphrey of Minnesota, to include the language in one of the first versions of the legislation introduced in 1956, when Humphrey was still a senator.

The word faces a key test in the dispute over biking.

Wilderness backers say the definition makes clear that no mountain bikes should be allowed under any circumstances, but that’s a hard sell for many biking enthusiasts.

"In my mind, there is this ravenous ethos to protect this primitive form of going into the backcountry, but they’re being selective about it," Gensheimer said. "I mean, it’s like, ‘Oh, you can take a horse there, and you can walk there, but you can’t ride a bike there.’ I want to see more wilderness, but not if that means I can’t occasionally go experience it on a bicycle."

When he introduced his bill, Lee said the wilderness system was created "so that the American people could enjoy our country’s priceless natural areas." He said his bill would let local officials decide whether and where to allow mountain biking.

But those who want to exclude mountain bikes say there’s good reason to do it: The bikes are too fast.

"Mountain biking would change the character of wilderness altogether," said Chris Servheen, adjunct research associate professor at the University of Montana and the former head of the Fish and Wildlife Service’s Grizzly Bear Recovery Team.

Servheen said bears and mountain bikers can’t safely coexist, citing the 2016 death of Brad Treat, a Forest Service law enforcement officer who was fatally mauled after his mountain bike frightened a grizzly bear and collided with the animal on a trail just outside of Glacier National Park in Montana.

"The surprise encounter can happen with any animal," Servheen said. "With bears, they can be aggressive if they’re surprised. Mountain bikes are high-speed travel and they’re very quiet, and so the potential to run into a bear at high speed is very high."

Gary Macfarlane of Idaho, the president of Wilderness Watch, said the mountain biking proposal is the latest example of how "the recreation agenda tends to be driving the public lands conservation movement," adding that the nation is experiencing a "continual erosion" in wilderness protection.

"The national wilderness preservation system is in serious trouble now," he said. "The whole idea of wilderness is to approach these areas with a little bit of humility and restraint, and the Wilderness Act has prohibitions for a reason — and that’s so that wilderness can be in contrast to areas where human works dominate."

Macfarlane said that even recent additions of wilderness areas have been tainted, citing Congress’ decision earlier this year to allow the installation of permanently fixed climbing bolts at one of the newest wilderness areas in Utah’s Emery County. While backers called it a win that could pave the way to more access for climbers in other wilderness areas, Macfarlane worries about the precedent.

"The conservation movement needs to avoid adding all of these new precedential nonconforming features, because eventually we’re not going to have a wilderness system if this trend continues," he said. "Unfortunately, I don’t hear many of the big greens talking about that, and that’s a problem."

With wilderness areas under constant attack, Mondale said "these things will die of nicks and cuts" if more Americans don’t defend them: "You just need to stand up and protect them," he said.

Gensheimer said that environmental groups will need more support from younger wilderness backers, but they run the risk of losing that contingent completely if they’re not willing to accept new uses.

"Eventually, they’re going to be replaced by a younger generation that is more multiuse in their recreational preferences," he said. "That is really a big thing. We need more advocates for public lands now than ever, but when you lock a group out, don’t be surprised if those people don’t want to support your land designation."

‘Basic to who we are’

Despite the many controversies, the national wilderness system has grown rapidly in its 55-year history.

In 1964, the system consisted of 9.1 million acres in 13 states; it’s 12 times as big now, and only six states have no wilderness areas: Maryland, Connecticut, Delaware, Iowa, Kansas and Rhode Island. Alaska has more than half the total acreage, while California has the most wilderness areas — 154. And the National Park Service controls the most acreage: more than 44 million acres. That’s all according to the website Wilderness Connect.

With 1.1 million acres, the Boundary Waters wilderness that borders both Minnesota and Canada ranks as one of the nation’s largest. It has 1,500 miles of canoe routes and more than 2,200 campsites, all of them accessible only by water.

Landwehr fears the proposal by Twin Metals Minnesota, a subsidiary of a Chilean mining company, to open a sulfide-ore copper mine could cause toxins to enter the groundwater in the popular wilderness area.

"The proximity is problematic because you’ll have this big industrial complex right next to the Boundary Waters in an area that’s currently just forest and lakes," he said.

Freshman Rep. Pete Stauber (R-Minn.), the local congressman, is among the backers. He says that the project could provide high-wage union mining jobs to the region and that the company will "cross every t and dot every i in following regulations."

"Unfortunately, politicians in Washington, D.C., and the Twin Cities metro area oppose the project," he said. "They know we have the strongest environmental reviews in the world, and they know Twin Metals will meet or exceed every standard."

But in a recent op-ed in his hometown paper, the Minneapolis Star Tribune, Mondale warned the proposed mining project could mean "long-term calamity."

He argued it "could cost us the soul of this splendid place that we have thought well-protected."

Mondale served as the chief sponsor of the Wild and Scenic Rivers Act. When President Johnson signed the landmark bill into law in 1968, it capped one of Mondale’s top legislative accomplishments.

Back then, Mondale said, he thought wilderness fights would someday become easier. He no longer believes that.

"When I was younger, I thought it would calm down with time, but it hasn’t," he said. "There’s something about the moral elements of this fight that makes it different. It’s not just another fight — it’s basic to who we are."