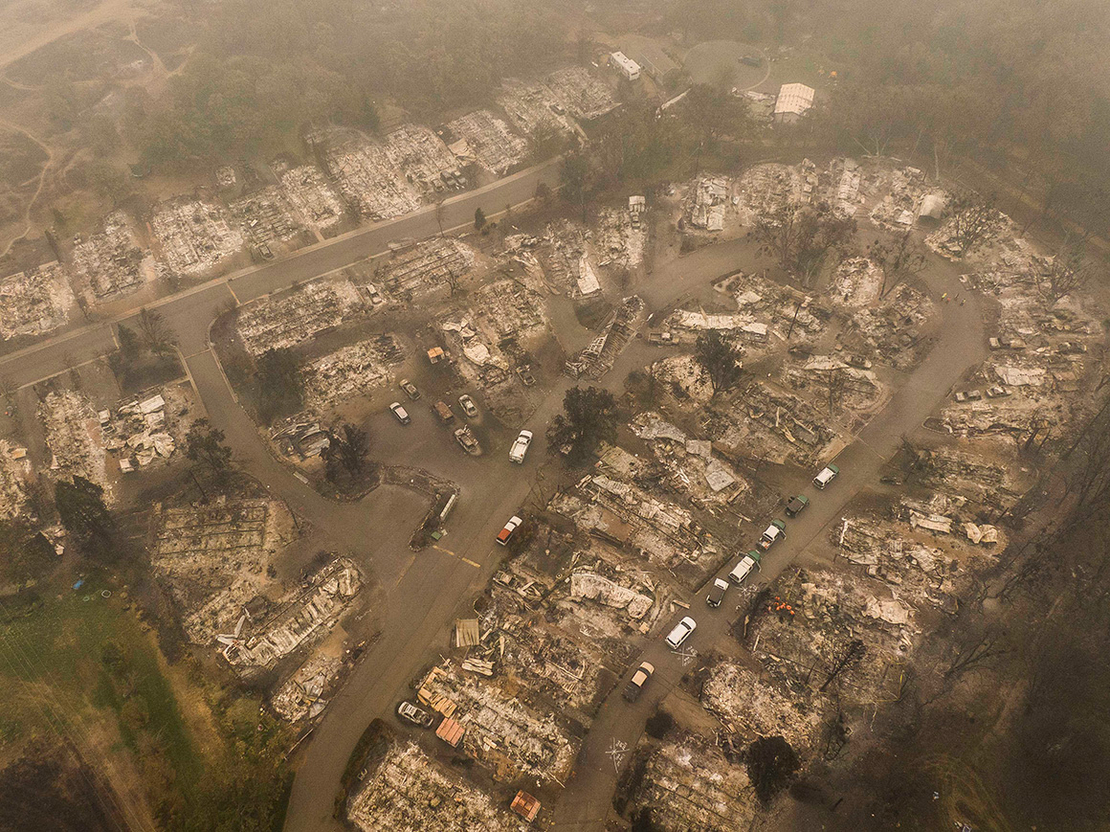 Search and rescue personnel look for survivors after a wildfire whipped through Ashland, Ore., in 2020. David Ryder/Getty Images

Oregon officials released a map this summer that offered a detailed look at the dangers of wildfire across the state — right down to the tax lot and property level.

Then they withdrew it.

The tool, which labeled tens of thousands of structures as highly vulnerable, drew fire from Oregon residents after many of them received letters notifying them of their wildfire “risk class.”

Some voiced concerns in contentious community meetings that the tool incorrectly identified their towns or properties as being overly exposed to damaging blazes; a “high risk” designation could result in new fire management requirements from the state. Others raised the possibility that the map could send insurance rates soaring or drive down the value of their homes.

“In response to input received since posting, we have decided to remove the current iteration of the wildfire risk map from the Oregon Explorer and withdraw the notices sent,” Cal Mukumoto, who directs the Oregon Department of Forestry, said in a statement last week.

He said the state would refine the map — and its so-called risk classification assignments — with the help of Oregon State University.

The state’s decision to rescind the tool comes as climate advocates and financial regulators across the country emphasize the importance of providing homeowners, investors and local governments with information about mounting climate risks. The situation in Oregon shows how difficult that process can be when it stands to have financial impacts on residents.

In this case, the effort to assess state wildfire risk arose out of legislation passed by the Oregon legislature last year. The bill provided more than $220 million to make investments in “fire-adapted communities, wildfire response and resilience landscapes.”

It does so in a range of ways, such as establishing a “certified burn manager” program and offering grants for projects that reduce wildfire risk on public and private land and in vulnerable communities.

The bill also charged the State Forestry Department with spearheading the development and maintenance of a “comprehensive statewide map of wildfire risk” that would make clear which counties and properties fall into five “risk classes,” ranging from extreme and high risk to no risk.

State agencies were also required to identify Oregon’s “wildland-urban interface,” where “homes mix with flammable vegetation,” putting people and property at risk, according to a state fact sheet.

That map would help implement other parts of the bill, such as deciding which communities need wildfire prevention grants and new “defensible space” requirements. Those classes and designations, according to the legislation, would be based on weather, climate, topography and vegetation.

“We’re going to live to learn with wildfire — we have to do that. But most of these investments through Senate Bill 762 are trying to take the catastrophic [out of] catastrophic wildfires,” Derek Gasperini, a spokesperson for the Oregon Department of Forestry, said in an interview.

The department released the map in late June. Once on the website, viewers could type in addresses or zoom in and out on the map to identify the risk level of different areas across Oregon. Some regions were colored green or yellow, while others blazed red. If anyone disagreed with how a particular area was classified, they could appeal that decision.

Then on Thursday, the Department of Forestry withdrew the map for revisions. Driving the decision were comments made through email and voice messages and during community meetings.

Two community meetings took place in person, but one was canceled and another was moved to a virtual format after officials in Grants Pass, Ore., received a “voicemail that threatened physical violence against the presenters if they came,” Gasperini said.

During the virtual meeting, which drew roughly 1,200 participants, residents railed against the tool and its potential impacts. A main concern was that insurance companies might respond to the risks outlined in the map by canceling policies or jacking up rates.

State officials acknowledged that concern. But they argued that insurance companies have had similar tools for years and that the map wouldn’t change rates or policies.

“If a homeowner lived in a high-probability wildfire area, rates would have gone up regardless of the state’s new map. With the historic 2020 wildfires in Oregon, we are now seeing rates being adjusted,” Jason Horton, a spokesperson for the Oregon Division of Financial Regulation, said in an email.

Even so, according to a Facebook post last Wednesday by Pam Marsh — a Democrat who represents District 5, or southern Jackson County, in the state legislature — the Division of Financial Regulation has already issued a “call for data from all insurance companies with policyholders in Oregon (which they must respond to) to determine if any companies are using the map in setting rates.”

Participants also voiced uncertainty around what new land management requirements they might face based on their risk class and the extent to which they could change their risk class by, for instance, reducing the amount of vegetation near their properties. Others criticized the state for releasing the map without first surveying communities and looking at properties in person.

Gasperini said the state plans to dig through the “appeals we’ve already received and look at trends throughout appeals and see if there are geographic areas that have multiple appeals to see if there is interpretation or analysis in the map that have gotten some places wrong.”

The state also plans to wait for the Oregon State Fire Marshal to finalize and adopt its defensible space code — which is supposed to happen by the end of the year. That could help officials provide residents with clear information about the standards that would apply to their properties based on the map, and if their risk class might change.

“We are trying to make sure that we can visit communities with an updated version of the map, with a full context and picture of what it means for those regulations,” Gasperini said.

Even before potential updates, the Department of Forestry believes that the vast majority of the map is already accurate.

“There are folks that may not like the classification of high or extreme risk or are legitimately concerned about downstream impacts because of that. But the overall purpose of the map is to identify the homes and communities at risk for the impact of catastrophic wildfire,” Gasperini said.

“And in certain areas of the state, that’s not going to change,” he added.