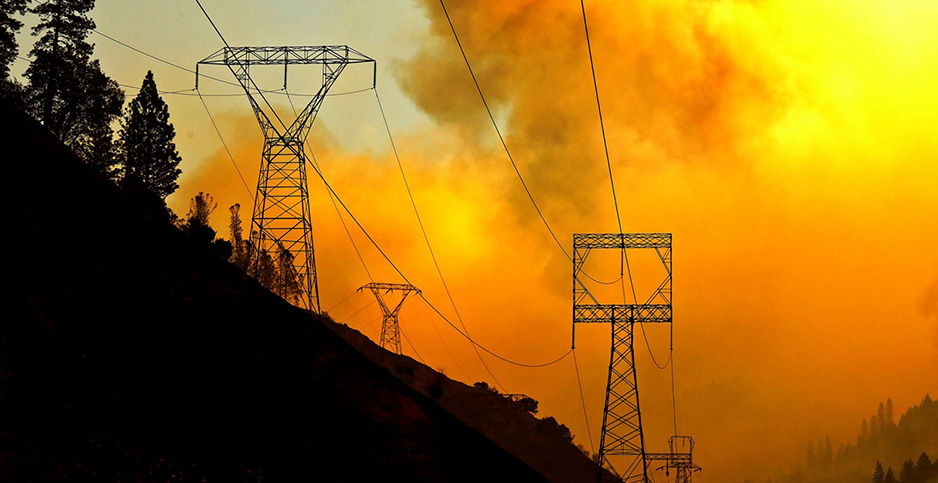 The survival of Pacific Gas and Electric Co., the nation's largest electric utility, might depend on how it adapts to worsening wildfires associated with climate change. Carolyn Cole/TNS/Newscom

California’s coming wildfire season is poised to determine whether the largest utility in the nation continues to exist — at least under its current ownership.

If it fails, state officials could force the company to sell its assets.

PG&E has admitted sparking some of California’s worst wildfires through decades of shirked maintenance on aging power lines. Under new management since the bankruptcy, the utility has launched a multiyear program of upgrading electric lines and poles, cutting back vegetation, and using technology to lower the risk of igniting deadly blazes.

But it also concedes that it will take years to make its system safer. It plans to continue shutting off power to residents and businesses on high-risk days.

Those watching the utility say there’s reason to worry.

"They’ve done some of the things that are necessary, but they are a long ways from being wildfire-free," said state Sen. Jerry Hill (D), who represents the southern suburbs of San Francisco. "There’s just so much work to do. They’ve neglected their system for so long."

PG&E declared bankruptcy in January 2019 as it faced more than $25 billion in liabilities tied to massive wildfires over two years. Those include the Camp Fire in Butte County, north of Sacramento, that killed 85 people. It’s California’s deadliest fire on record.

Climate change has intensified the company’s fire risk, utility officials said. Ten years ago, about 15% of PG&E territory was considered a wildfire risk area. That’s soared to more than 50%, with more than a half-million customers living in areas with high fire danger, it said.

Others argue that PG&E failed to make those areas safer as the risky territory expanded.

A Stanford University study said earlier this year that California’s dry season is getting longer as dry conditions expand into December. That means there’s plenty of dry brush and trees to burn when Northern California’s "Diablo" high winds arrive in late fall.

California’s snowpack in early June was almost gone, the National Interagency Fire Center said in its 2020 outlook. Loss of snowpack means vegetation will dry out sooner. Meanwhile, about 147 million trees have died since 2014 because of drought, disease and bug infestation.

Given the compound threats, California’s Legislature last year passed A.B. 1054, which created a $21 billion catastrophe fund. If a utility’s equipment starts a fire, it can collect from the fund to cover costs.

But PG&E could lose full protection if the California Public Utilities Commission (CPUC) deems the utility’s wildfire mitigation actions inadequate. That could spark a financial catastrophe.

Of the $25.5 billion PG&E pledged as part of the bankruptcy to settle wildfire liabilities, $13.5 billion is promised to wildfire victims. Half of that will be shares of PG&E stock, placed into a trust and sold by independent trustees over the next few years.

If investors flee and the share price plunges, PG&E wouldn’t be able to fulfill its promise to some 77,000 people in the victims group, according to lawyers for the survivors.

Moreover, if PG&E acts negligently, its shareholders are supposed to pay back the safety fund. But it’s not as easy as issuing shareholders a bill, especially if the stock value falls, said state Sen. Bill Dodd (D), who represents the Napa wine country region that burned in 2017.

"If there was a fire the size of the Camp Fire up in Butte County, I can almost assure you there wouldn’t be enough money [from shareholders] to take care of things," Dodd said. "PG&E reemerging out of bankruptcy, I think they’ve got adequate financing to run their company. I don’t think they can afford many mistakes."

California leaders have set the stage for a forced takeover of PG&E if they believe it’s warranted.

To get its bankruptcy reorganization plan approved, PG&E needed the California Public Utility Commission to sign off. That allowed Gov. Gavin Newsom (D) and CPUC President Marybel Batjer to negotiate for conditions. Those included installing an independent monitor at the company. That person is Todd Filsinger, a corporate restructuring specialist with Filsinger Energy Partners. Newsom won permission for Filsinger to scrutinize actions of PG&E’s top management.

The negotiations also led to a six-step review of the company if it fails to meet safety standards. Ultimately the CPUC could revoke PG&E’s license to operate as a monopoly utility. A receiver would decide what to do next. It could mean the company’s assets get put up for sale.

Reaching that point could take awhile, said Michael Wara, a Stanford professor appointed to the state Commission on Catastrophic Wildfire Cost and Recovery. At each stage, PG&E can present evidence and would get time for corrective actions. There is, however, the risk that a CPUC review scares off investors who are supposed to help rebuild PG&E’s finances, Wara said.

At the same time, state lawmakers have taken actions that make it easier for PG&E to remain solvent, said Steve Weissman, a lecturer at the University of California, Berkeley, School of Public Policy, who advised Newsom on how future wildfires could affect utility ratepayers.

A.B. 1054 limited how much utilities have to pay for sparking blazes. For PG&E, it’s $2.3 billion on a three-year rolling basis. Even if it has multiple fires in any three years, that’s all it has to pay, Weissman said.

If there’s a push for a takeover, action is pending for a way to do it.

Hill, the California senator, crafted a bill, S.B. 350, that would create a government-sponsored nonprofit, "Golden State Energy," that could attempt to buy PG&E. It could borrow money at low rates from the California Infrastructure and Economic Development Bank.

"No more business as usual for PG&E," Newsom said in a statement. "As we head into wildfire season amid a pandemic, Californians need to have confidence that their utility is focused on customer safety — preventing wildfire sparks and making critical safety upgrades. SB 350 marks a critical step in the transformation of PG&E into a utility that is accountable to those it serves — the people of California."

If a nonprofit buys PG&E, that would avoid transferring the liability for future fires caused by PG&E equipment to the state, Hill said.

But Travis Miller, a Morningstar analyst who follows PG&E, said the CPUC process is an extreme case that could end with a state takeover. That could lead to a sale or, more likely, he said, the breakup of PG&E into several government-owned, taxpayer-funded municipal utilities.

Miller wrote in June that the bankruptcy plan installs "an independent safety monitor who has the power to recommend a state takeover if PG&E has any safety lapses."

There are many reasons the state might want to avoid putting PG&E out of business, Weissman said. The state, a nonprofit or whoever buys PG&E would take on liability for any fires started by PG&E’s equipment, which is roughly 100 years old and hasn’t been well-maintained.

Weissman noted that wildfire prevention and funding costs of blazes could push up rates, which could make it harder to achieve the state’s climate goals. For example, he said, people will only buy electric vehicles if charging them is no more costly than fueling a gasoline-powered car.

"As [electric] rates keep going up, it becomes more challenging to persuade people to switch to an electric vehicle," he said. One advantage to a nonprofit or the state owning the utility, Weissman added, is that it "doesn’t have to make a profit."

PG&E has a multiyear plan to cut wildfire risk covering 7,100 miles of distribution lines in the areas with the highest wildfire threat, said spokesman Jeff Smith. The goal for this year is to upgrade equipment in 241 distribution circuit miles.

The utility is installing nearly 200 high-definition cameras that can spot small fires early. It’s part of a plan to add nearly 600 cameras by 2022. By that same year, PG&E plans to add 1,300 weather stations to monitor wind, humidity and other fire risks to "pinpoint when and where severe weather is likely to occur," Smith said.

Last month, the utility reported clearing vegetation along almost 1,000 miles of power lines out of a planned 1,800 miles, she said.

That type of work, as well as hardware upgrades, has been neglected for many years, Weissman said.

"They’ve arguably done more work this year to be prepared for wildfires than they have in any particular year in the recent past," Weissman said. "Having said that, the system is so vast that one year’s work can only make a dent."

Blackouts for years to come

The utility will continue to shut off electricity to residents and businesses "for many years to come," Kevin Orsini, a PG&E attorney, said at a February hearing. He spoke before Judge William Alsup of the U.S. District Court for the Northern District of California, who is administering a criminal sentence against the utility tied to a deadly 2010 pipeline explosion south of San Francisco. PG&E is on probation for pipeline safety charges.

No amount of cutting vegetation near power lines will eliminate the need for the shut-offs, Orsini said. It’s because of the strong winds that arrive in the fall before California’s precipitation begins.

"The second a fire starts, despite the heroic efforts of [firefighters], it’s nearly impossible to contain it immediately," Orsini said. "[Power shut-offs] will remain a critical portion of the risk mitigation."

In high-wind events, the threat isn’t just a branch 10 feet from a power line that cracks and falls. "The real problem and the real risk long term is a tree 40 feet from the lines," Orsini said.

High winds can carry embers "a good mile" to other trees or houses, said Scott Barnes, battalion chief at the Mill Valley Fire Department north of San Francisco. That’s led to the fast spread of the most catastrophic fires.

Criticized for causing widespread blackouts last year, the utility said it plans to narrow their scope this year. PG&E has pledged to reduce the number of affected customers by one-third compared with last year and to restore power within 12 daylight hours after severe weather.

It plans to install nearly 600 "segmenting" devices by September that allow it to cut off power in high-risk areas and reroute electricity to other customers. The utility also plans to use microgrids and diesel-powered mobile generators to keep the lights on in many communities (Energywire, June 12).

Residents hit by blackouts last year voiced outrage to lawmakers, who’ve been critical but hesitant to limit the outages. The CPUC has told utilities that if they do a power outage, they must prove it was necessary.

"There is no good answer," said Dodd, the state senator from Napa. When there are high-risk weather conditions, "absent a power safety shut-off, we could have devastating impacts from a wildfire," he said.

However, the shut-offs "have devastating impacts on our local economy, particularly in Northern California where tourism is key" in fall months.

Political pushback raises questions about whether PG&E will use the shut-offs as consistently as it did last year, Wara said.

"The governor’s team and the PUC, they view power shut-offs with a lot of disfavor," Wara said. "Even though they don’t want to say no, they do want to put a lot of pressure on PG&E to minimize the impacts, because there’s huge political blowback. It just makes me nervous."