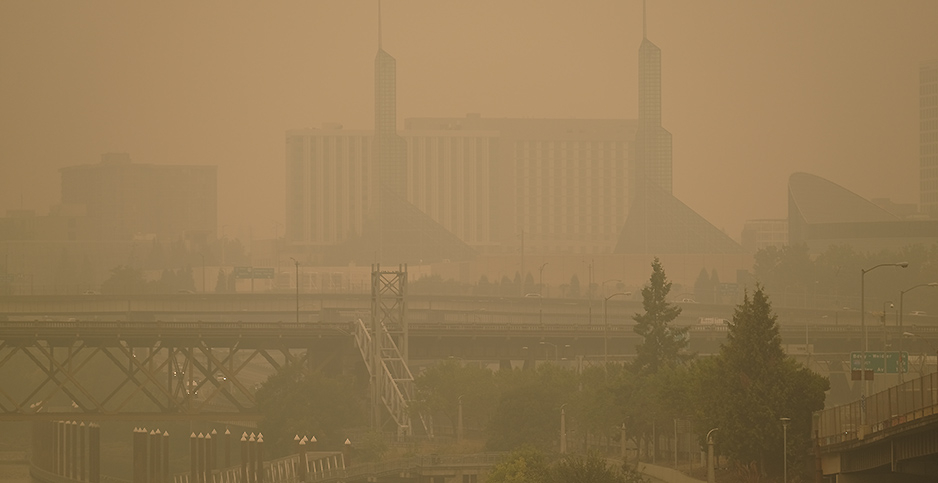 A historically brutal bout with noxious air over recent weeks has stemmed not from pollution spewed by factory smokestacks or car tailpipes, but from the primordial forces of natural combustion in Western forests.

Scientists believe human-caused climate change is stoking both wildfires’ frequency and intensity, possibly posing tough questions for air quality regulators accustomed to treating them as the exception, not the norm.

When Congress a half-century ago decisively determined that dirty air had become a national menace, the culprits were clear: The "growth in the amount and complexity of air pollution brought about by urbanization, industrial development, and the increasing use of motor vehicles, has resulted in mounting dangers to the public health and welfare," lawmakers wrote in the opening to the 1970 Clean Air Act.

But as residents of cities up and down the West Coast reflexively check air quality apps due to pollution stemming from wildfires, there is a significant knowledge gap of the potential impact on the future health of tens of millions of people.

In regard to the long-term effects of smoke exposure, there is "very little in direct research data," said Dr. John Balmes, a professor of medicine at the University of California, San Francisco, and former member of the EPA advisory committee that helps set air quality standards.

Short term, the consequences are better known. Smoke contains thousands of compounds, including hydrocarbons and other organic chemicals, carbon monoxide, and nitrogen oxides, according to an EPA guide. But the most perilous are the tiny bits of particulate matter that can penetrate deep into the lungs and even find their way into the bloodstream.

Those particles, technically known as PM2.5 because they are no bigger than 2.5 microns in diameter or one-thirtieth the width of a human hair, are linked to a wide variety of respiratory and cardiovascular ills, including worsened breathing problems, higher risk of stroke and non-fatal heart attacks, and increased odds of premature deaths in some circumstances.

Exposure to smoke could also increase vulnerability to virus-borne COVID-19, Balmes said. Even before the current spate of blazes began last month, the Forest Service had canceled prescribed burns that are a standard part of forest management, he said.

Immediate evidence of the fires’ health effects is anecdotal, and it’s unclear how severe the total impact has been. Based on recently collected data, for example, California hospitals have so far not experienced an uptick in admissions, Jan Emerson-Shea, a spokeswoman for the California Hospital Association, said in a phone interview yesterday.

In parts of the West Coast, skies have recently cleared somewhat.

Emerson-Shea is based in Sacramento; there, the last two days have been "quite nice," she said. As of this morning, however, EPA’s air quality index still rated a large swath of central California as "unhealthy" or "unhealthy for sensitive groups." Farther north, a vast tract of west-central Oregon was still deemed "very unhealthy."

And even in areas that have seen improvement, any change is relative.

"I haven’t gone outdoors in 10 days except to walk my dog while wearing a mask with a PM2.5 filter," Ann Carlson, an environmental law professor at UCLA, said in an email late yesterday. In her neighborhood, the air quality index has lately fallen by about half to land in the 70-95 range, she said. EPA considers that threshold acceptable, although possibly risky for people sensitive to air pollution.

"But the skies are still smoky and the neighborhoods that are east of me and closer to the fire still have some pretty bad air," Carlson added.

Also today, Vancouver, on Canada’s west coast, had the world’s worst overall air quality; Portland, Ore., Seattle and Denver were also in the top 13, according to IQAir.com, a website that tracks global conditions.

At Oregon State Hospital, a psychiatric facility spread over two campuses, wildfire smoke has meant more stress for some 600 patients, spokeswoman Rebeka Gipson-King said. On top of restrictions forced by the COVID-19 pandemic, she said, they now can’t go outside if air quality is too poor.

Wildfires are natural to Western forests; their scope can vary widely from year to year.

As E&E News reported yesterday, the 7 million acres burned so far this year is well below the total for the same period in 2017 (Climatewire, Sept. 17).

The blazes began in California and Colorado in the second half of August; since the beginning of this month, they have also been "seriously affecting Oregon and Washington," the European Union’s Copernicus Atmosphere Monitoring Service said in a news release this week.

Compared with past years, the release said, fire activity "has been tens to hundreds of times more intense than the 2003-2019 average in the U.S. in general, as well as in several affected states."

"The big thing about this was the severity," echoed Andy Wineke, a spokesman for the Washington State Department of Ecology.

In Clean Air Act jargon, air quality violations stemming from wildfires and other causes outside of regulators’ direct control are deemed "exceptional" events.

Subject to EPA’s approval, states can exclude that data from consideration in the readings that determine whether an area is in compliance with National Ambient Air Quality Standards for fine particles and other pollutants. In the past, EPA has granted waivers for wildfire-related exceptional events for Northern California, as well as Sacramento; Phoenix; and Reno, Nev., in regard to either the agency’s particulate matter or ozone standards, a spokesman said.

But as wildfires become more common, Carlson said, it’s conceivable that the Clean Air Act could be used to prod states to reduce their likelihood, or else require more conventional sources to cut emissions to ensure compliance. Still, she added, "whether it’s a good idea to turn state air pollution agencies into fire management agencies seems worth examining."