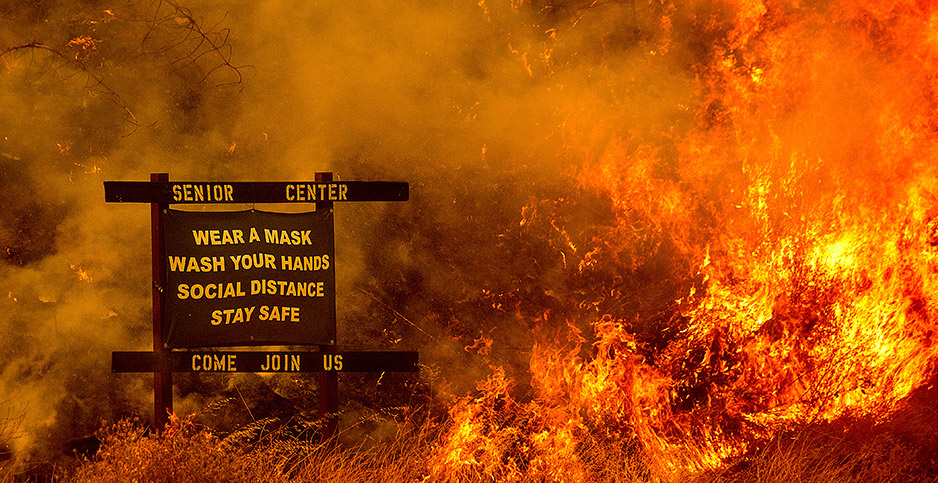 California, a state that historically lured tourists and migrants with its inviting beaches and Mediterranean climate, now looks more like a post-apocalyptic hellscape.

More than 780 square miles of the state is on fire. Many of the major blazes in the north continue to burn uncontrolled, killing five people and forcing more than 60,000 others to evacuate.

In the south, a heat wave has produced some of the hottest temperatures recorded on Earth in nearly a century.

Californians have retreated inside to avoid the deteriorating air quality caused by the heat and fire, cranking air conditioners that have pushed the electric grid to its limits, causing sporadic blackouts.

Simultaneously, the COVID-19 pandemic, once thought to be under control in California, has again reared its deadly head.

And experts warn there is no end in sight.

The crises are "stacking on top of each other," said Brad Alexander, a spokesman for the governor’s Office of Emergency Services. "Each one is interlinked to the other."

What the state is now facing, he said, is "unprecedented."

"Pretty much any place in California," he said, "you are seeing smoke in the air."

There are more than two dozen major fires burning in the state, and hundreds of smaller ones, according to the California Department of Forestry and Fire Protection.

Many were sparked by a large and unusual lightning storm a week ago that produced more than 10,000 lightning strikes, said Daniel Swain, a climate scientist at UCLA.

The largest is the LNU Lightning Complex Fire in the state’s wine country spanning five counties. As of this morning, it had scorched 215,000 acres and was spreading uncontrolled, doubling in size in the last 24 hours alone.

Swain estimates the state is approaching 600,000 acres burned in Northern California in the last seven days.

He said the convergence of events is hard to fathom. Northern California had an exceptionally dry winter. June and July were not outside the norm for the state.

But then August has pummeled it with heat.

The current fires are also unusual because they are burning in nearly every type of California ecosystem, including in coastal areas that rarely experience fires. Big Basin Redwoods State Park in Santa Cruz County is home to some of the state’s most famous redwoods. Fire is sweeping through it and has burned down its headquarters, which is on the National Register of Historic Places.

Climate change has undoubtedly played a role, Swain said. He pointed to recent research he co-authored that found the number of fall days with fire-conducive weather has doubled in California since the 1980s and will continue to accelerate (Climatewire, April 3).

Gov. Gavin Newsom (D), who this week declared a state of emergency, highlighted that connection in his remarks at the Democratic National Convention last night.

“If you are in denial about climate change, come to California.”

"If you are in denial about climate change," he said, "come to California."

President Trump, however, criticized the state’s forest management as exacerbating its fire risk, a theory that has been widely discredited by experts.

The National Weather Service said this morning that most of the West is "blanketed by a hideous shield of smoke."

"It would be great," the service said, "if portions of the East could send some of their rainfall to drought stricken areas of the West."

The COVID-19 pandemic has created more challenges for the state.

Inmate crews typically make up a significant portion of the state’s firefighting force during fire season, and the pandemic has reduced the number of inmate crews that are available to deploy.

After starting a decline at the end of July, COVID-19 cases are again on the rise.

The state’s system for recording cases crashed earlier this month, though it has since been brought back online. Some of the counties affected by wildfires have seen increases, and the state recorded 5,920 new positive cases in its most recent report Wednesday.

That has made evacuations more complicated.

"We are taking a different approach this year because of the public health crisis," said Alexander of the state’s emergency services team. "We are not going to have masses of people going to a large facility like a sports arena. But we are still opening evacuation centers and shelters overnight."

The centers have placed an emphasis on face coverings, hand-washing stations, and making sure there is adequate air conditioning and air circulation, he said.

"Those are the things we know through our public health experts that make a huge impact even in a disaster within a disaster," he said.

Direct Relief is a Santa Barbara, Calif.-based nonprofit that provides medical and other supplies to disaster-stricken areas around the world.

Andrew Schroeder, its vice president for research and analysis, said the crises have given the nonprofit whiplash.

This week, it has had to focus on California.

"It’s what Direct Relief is set up for," he said, "but it’s a daunting challenge."

Usually, emergencies happen but then are followed by a long period of time to recover — or a gap.

"This year, that is not the case," he said. "It’s emergency response all the time."

The effects of the fires on the spread of COVID-19 likely won’t be fully known for weeks. Schroeder noted research has found that bad air quality exacerbates underlying conditions like asthma that make people more susceptible to COVID-19.

And he noted that as a result of the fires, people will be spending more time indoors, which is universally recognized as a potential risk factor.

"Is that going to result in spikes that occur purely because people are spending more time in poorly ventilated spaces?" he asked.

What is perhaps most alarming about the wildfires is that there is no end in sight, Swain said.

Typically after an initial fire outbreak, he said, fire crews, often with the help of a change in weather pattern, get the blazes under control.

"Currently, things are actually getting worse," Swain said yesterday, noting that while the heat wave may abate some, there is no rain in the near-term forecast.

California has only just started its usual fire season, which historically runs from August to November.

And the current fires aren’t the usual offshore wind-driven fires that have devastated California in the past.