Wildlife, renewables take back seat to oil and gas in budget 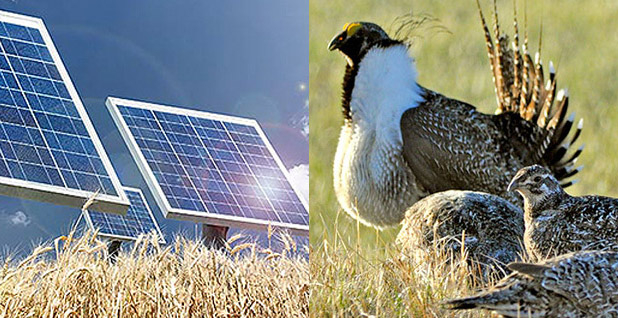 As market conditions put a pause on oil and gas activity, some Western conservationists are questioning why the Interior Department has prioritized funding for fossil fuel production over renewable energy development and sage grouse conservation. NASA (solar); Jeannie Stafford/Fish and Wildlife Service(sage grouse)

In southwest Wyoming, a plan to revise greater sage grouse management on a 3.5-million-acre mineral estate could be in jeopardy under the Interior Department’s proposed fiscal 2018 budget.

But with the domestic energy business in a natural pause prompted by low oil and gas prices, this is exactly the time for the federal government to focus on investing in critical wildlife habitats and sustainable job creation, some Western conservationists say.

The Bureau of Land Management’s Rock Springs Field Office has been in the process of amending its Green River Resource Management Plan (RMP) to address greater sage grouse management. Last week, Interior proposed directing $40.5 million toward grouse protection, down from $68.9 million in the fiscal 2017 omnibus spending package (Greenwire, May 25).

BLM’s budget also contains a $10 million reduction for the Resource Management Planning, Assessment and Monitoring program. The reduced allocation would require a reprioritization of efforts to focus on the expansion of coal, oil and gas development, according to Interior’s budget in brief.

"If you don’t have an emphasis on balance, on conserving the best habitat while at the same time allowing for development where it makes sense, we risk losing some of this great habitat that we have and that we need to conserve for the future," Merrill said.

The reductions to BLM’s sage grouse and RMP programs are part of an overall $163 million proposed budget decrease for the bureau. BLM’s oil and gas programs, however, received a $16 million bump (Energywire, May 24).

Wyoming’s oil and gas regulator saw the increases as a promising sign — even if the market isn’t currently supporting new production.

"The oil price is obviously one major factor for an operator in determining if they are going to pick up a rig, but the certainty of having these permits in hand allows the operator to optimize the rig schedule and drill those permits which provide the best chance for a return on the investment in this price environment," said Tom Kropatsch, deputy oil and gas supervisor at the Wyoming Oil and Gas Conservation Commission.

The funding increase would help erase a backlog of nearly 3,000 applications for permit to drill (APDs), he said (Energywire, May 17).

"The notion that Interior is going to lead some renaissance here … is misplaced," Hayes told reporters on a conference call last week.

Although the budget is unlikely to be implemented as is, the proposal is a bellwether of the Trump administration’s priorities, said Greg Zimmerman, deputy director of the Center for Western Priorities.

"It is an indication of the Trump administration and [Interior Secretary] Ryan Zinke’s vision for public lands and the role of energy and conservation on public lands," Zimmerman said.

If the administration is also looking at rolling back drilling safeguards for water supplies and wildlife habitat, he said, "speeding up the pace of leasing could lead to some pretty unfortunate consequences."

In New Mexico, Interior’s budget has been regarded as a missed opportunity for renewables.

Oil towns have seen massive layoffs since the bust hit, and the governor is working to plug the state’s budget gap. Fossil fuels are the backbone of New Mexico’s economy, but with the industry in a slump, the time is ripe for investment in more sustainable job creation, said Garrett VeneKlasen, executive director of the New Mexico Wildlife Federation.

Yet onshore and offshore renewable energy programs got a reduction under Interior’s proposed budget.

"I think the administration is being regressive in their approach around energy," VeneKlasen said. "I think it’s a mistake. We need to fund renewables at the same level — if not more — than we fund fossil fuels."

New Mexico ranks 48th in renewable energy production, according to the Department of Energy.

"Even if government subsidies to those industries are not going to be increased, with increased demand, solar and wind are still going to do well," she said.

"We couldn’t have enough of that in New Mexico right now," she said.

Interior’s investment coincides with an uptick in activity in the Permian Basin, the oily formation that touches New Mexico’s southeastern corner, Sonntag said.

"When you have government at any level that is supportive of an industry, you will see the industry do better," she said. "When you have an attitude of not wanting to see production, that tends to flow through, and it does hamper production."

"BLM seems to be awfully heavy in management, but it’s the on-the-ground people they’re missing," he said.

The field offices need more staff to conduct environmental analyses and APD site visits so applications can be processed in a timelier fashion, he said.

"Those are the time frames that need to be shortened," Bolton said.

"We can’t afford to lose people on the ground," he said.

Others fear BLM could lose enforcers of its rules — like its Methane and Waste Prevention Rule, which remains on the books after a failed attempt by Congress to scrap it (Greenwire, May 10).

"It’s dangerously irresponsible" to cut Interior’s land management programs "while they elevate this one use," said Scott Braden, wilderness and public lands advocate for Conservation Colorado.

In Mesa County, where Braden lives, there are three national conservation areas that could be hurt by reduced visitor services, he said.

"As places like my town seek to diversify our economy and engage people, we’re going to see a reduced capacity to do that at the expense of elevating oil and gas," Braden said. "That directly hurts our communities in our efforts to become more of a recreation destination."

"They’re ignoring taking care of the land in the name of trying to chase some money in oil and gas when the market’s not demanding it," he said.

"We’ll probably continue to have oil and gas development at some level for the next 30 years, but it can’t be our only source of income," she said.

"We desperately need to get beyond the boom-and-bust economy."