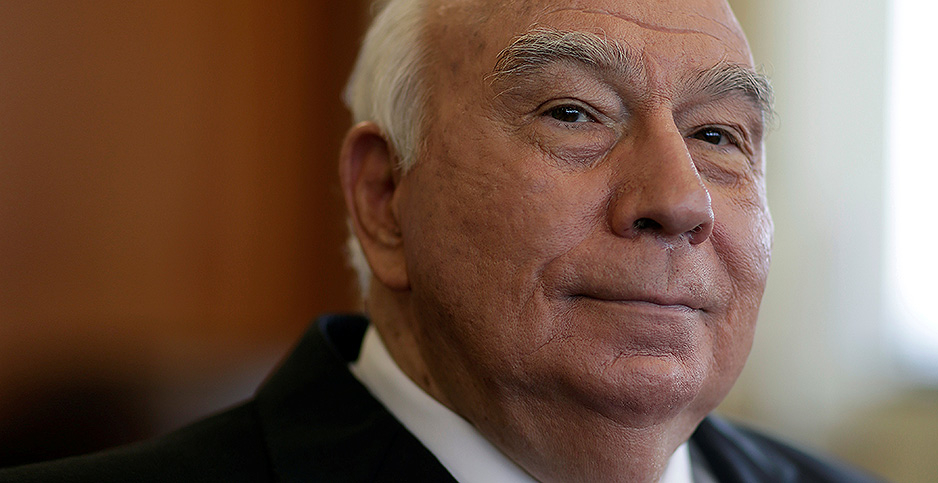 As the coal industry collapsed around him, Bob Murray got out the company checkbook.

Over the last two years, the CEO of America’s largest private coal company, Murray Energy Corp., gave more than $800,000 in company money to groups that promote climate denial. He also gave almost $100,000 to a political action committee dedicated to securing a Republican majority in the Senate. And he gave heavily to state-level campaigns where coal issues were prominent. In Ohio, he contributed $100,000 to a dark money group tied to the speaker of the Ohio House of Representatives, a Murray ally who used his position this year to pass legislation that helped bail out two coal plants in the Ohio Valley.

The donations are not a surprise. Murray, an outspoken supporter of President Trump, has emerged as the public face of efforts to rescue the coal industry. The contributions reveal the outlines of his efforts to reshape the political and regulatory landscape to rescue his badly faltering industry.

But there was a problem. Murray’s efforts failed to alter the economic terrain that was jarring his Ohio business. Coal demand continues to contract amid a spate of power plant closures nationwide. That point was driven home by the disclosures yesterday of his political contributions: They were made in a filing to the U.S. Bankruptcy Court for the Southern District of Ohio’s western division, where his company filed for Chapter 11 protection.

"It’s like the Hail Mary for the coal industry. You’re either going down or getting subsidies," said Leah Stokes, a professor at the University of California, Santa Barbara, who studies climate policy in the power sector. "It is clear coal can’t compete in states that have competitive markets like Ohio."

While Murray’s opposition to climate science has long been public, his financial support of such efforts has been a mystery. Court filings show that as Murray was pressing the Trump administration for a series of environmental rollbacks, his company was also funding groups seeking to muddy the public’s understanding of climate change and the human causes behind it.

Recipients of the company’s donations include groups that argue the world needs more carbon dioxide to help plants grow. Those claims, in turn, have been cited by other groups when trying to weaken federal environmental protections.

Murray Energy donated $300,000 to Government Accountability & Oversight. That group is headed by Chris Horner, who has been revealed as a recipient of coal money in other company bankruptcies. Horner, an attorney and former member of Trump’s EPA landing team, has spent years targeting climate scientists with Freedom of Information Act requests and was a promoter of the debunked "Climategate" controversy. Horner has promoted misleading claims about climate scientists on Fox News and Infowars, the conspiracy theory outlet.

Murray’s company contributed $130,000 to the Heartland Institute, which rejects climate science and sends teachers across the country educational materials that raise doubt about climate change. Members of the group recently traveled to the Madrid climate talks to promote theories that are meant to undermine mainstream research.

The Competitive Enterprise Institute received $200,000 from Murray. Myron Ebell, the former head of Trump’s EPA transition team, is the director of the Center for Energy and Environment at CEI. Ebell has worked with EPA officials to weaken climate protections and to help roll back regulations that were designed to protect public health. Ebell is a prominent voice rejecting climate science.

Other recipients include the Center for the Study of Carbon Dioxide and Global Change, which received $60,000 from Murray and argues that carbon dioxide emissions from fossil fuels help plants thrive; the International Climate Science Coalition ($60,000); and FreedomWorks ($50,000), a conservative group that fights regulations and is connected to the Koch network.

"This was meant to be secret, this relationship would not be known except for the bankruptcy," said Kert Davies, director of the Climate Investigations Center. He noted that most of the funding represented a single year, 2018, and shows Murray supported a network of groups that reject climate change. "It opens a lot of questions about how important Murray alone and how important the coal industry writ large are in recent funding of denial."

Murray does not have a role in the reorganized company, which is now being led by his nephew, Robert Moore. A spokesman for Murray Energy said the company had no comment on the filing.

In a 2012 study, Brulle found that the vast majority of funding for think tanks like Heartland and CEI came from conservative philanthropic foundations, which see climate policy as a vehicle for growing the size of government. Among the leading funders at the time were Donors Trust, the Scaife affiliated foundations, and the Lynde and Harry Bradley Foundation.

Murray’s donations are telling in another sense, he said.

"It tells me that they are still following the same playbook. Their rhetoric hasn’t changed by funding these groups that provide misinformation about climate science," Brulle said. "For me, they don’t have to win the debate. What they have to make it is at least semi-plausible that the science on climate change is unsettled and there is debate on these topics."

Murray’s attempts to promote climate denial have come as the coal industry finds itself increasingly isolated. Leading utilities like American Electric Power, Duke Energy Corp. and Southern Co., which rank among the country’s top coal burners, once funded climate disinformation. Today, they are retiring coal plants and committing to reductions in carbon emissions.

American utilities are on track to retire 13.6 gigawatts of coal capacity this year, federal figures show, the third most on record and one year after retiring 14.6 GW of coal. That amounts to a loss of roughly 11% of U.S. coal capacity in two years.

Murray has sought to stem the decline by giving generously to Republican candidates at nearly every level of government. In Washington, D.C., he gave $95,000 to the Senate Leadership Fund, a Republican PAC, as he cheered the Trump administration’s efforts to roll back emission standards for power plants and championed a failed attempt to provide subsidies to faltering coal facilities.

Yet Murray’s most consequential contributions may have been in Ohio, where he gave $100,000 to a private corporation called Hardworking Ohioans Inc. The company spent heavily to support a slate of Republican candidates in 2018, first in the GOP primary and then against Democrats in the general election, according to Ohio press accounts. The common thread: Hardworking Ohioans steered money to candidates supporting state Rep. Larry Householder (R) in his bid to oust fellow Republican Ryan Smith as House speaker.

In at least one case, the PAC’s money could have been decisive. The group ran an ad showing a video in which a Democratic candidate running for a seat in a Dayton-area district was pulled over by police and took a Breathalyzer test. The candidate turned out to be sober, but Democrats argued the damage was done, according to the Dayton Daily News. The Republican won by 137 votes.

Householder was named speaker when the legislative session opened in Columbus this year, and he set about promoting a bailout of two struggling nuclear plants (Energywire, July 24). As part of the deal, Ohio lawmakers also agreed to subsidize two coal plants run by a consortium of utilities (Climatewire, June 30).

Stokes, the UCSB professor, said Murray had largely failed to prevent the shutdown of coal plants needed to sustain his business. But his attempts to tilt the political environment in favor of the industry have succeeded in other ways, she said.

"If you make the benchmark what needs to be done according to climate science, then coal plants have stayed on far too long," Stokes said. "Climate denial and delay has been wildly successful."