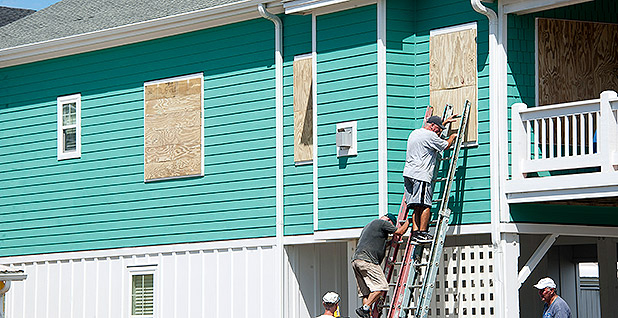 Hurricane Florence is set to make landfall this week in the Southeast in what could be a historic storm event that portends a new coastal reality, as a warmer planet feeds wetter, more intense storms.

And while scientists are generally hesitant to tie specific weather events to global warming, some in the advocacy world hope storms like Florence will eventually spell a political epiphany for Republicans in Congress.

"I think we’re seeing the breaking point now," said Steve Valk, spokesman for Citizens’ Climate Lobby, the group behind the bipartisan Climate Solutions Caucus. "With the three storms we had last fall — $300 billion worth of damage, thousands of lives lost — I think people are connecting the dots."

Already, groups like CCL and Friends Committee on National Legislation, a Quaker organization that works on the issue, say they’ve had success behind the scenes, even if lawmakers don’t always want to talk about climate change publicly.

That has played out in the form of groups like the Climate Solutions Caucus and in a gradual rhetorical evolution, particularly among younger Republicans, both on and off Capitol Hill.

It has also taken the shape of a carbon tax bill from Republican Florida Rep. Carlos Curbelo, but minds — or congressional seats — would likely have to change before it even gets a shot at a hearing.

"I think you already see how the rhetoric is evolving," said Emily Wirzba, a legislative representative with the Friends Committee. "It’s pretty rare to find a member of Congress that denies that climate change is happening."

Instead, they’ll often focus on the effects of climate change — such as increasingly bad extreme weather and sea-level rise — while deflecting questions about the greenhouse gases that cause it.

House Majority Whip Steve Scalise, for instance, has long pushed for coastal restoration funds and flood protection measures for his district in the Louisiana marshland. He touted those efforts in a Times-Picayune op-ed last month in which he warned Louisianians to "stay vigilant" during the peak of the 2018 Atlantic hurricane season.

But Scalise also was the lead sponsor of an anti-carbon-tax resolution that passed the House this summer.

"They’re trying to walk that really fine line between wanting to protect their district and still be in the denier camp," Grijalva said. "That’s not sustainable."

Maybe it is, though.

In the Yale Program’s most recent biannual survey in March, researchers asked registered voters how important climate change would be to their vote in the 2018 midterms among a list of 28 issues.

Overall, the issue ranked 15th. But among liberal Democrats and conservative Republicans — the two groups that most drive the results of primary elections — climate change ranked fourth and dead last, respectively.

Still, storms and other extreme weather can provide what Leiserowitz termed "teachable moments" — rare times when people collectively focus on a story with direct connections to climate change.

"In terms of just psychology and politics, it certainly elevates the issue of the environment," Curbelo told E&E News. "Environmental challenges are oftentimes invisible to the average citizen. For example, sea-level rise — it happens very gradually, so no one’s really thinking about it as they go about their business every day."

But he’s also careful not to put too fine a point on the issue. Both Curbelo and Leiserowitz noted that climate advocates often stretch the boundaries of attribution science and attempt to frame individual disasters as a direct result of climate change.

"I think sometimes people make the mistake of overstating some of the issues," Curbelo said. "We don’t have hurricanes here in Florida due to climate change. We have had hurricanes for hundreds of years here at least."

‘We need to make this an issue’

There may still be room for Congress to legislate on climate change in smaller ways, particularly when it comes to natural disasters, sometimes without even mentioning climate change.

For example, the "Preparedness and Risk Management for Extreme Weather Patterns Assuring Resilience and Effectiveness (PREPARE) Act," a bipartisan extreme weather bill, has passed the House Transportation and Infrastructure Committee and is awaiting a vote on the House floor.

H.R. 4177, from Rep. Matt Cartwright (D-Pa.), does not mention climate change, but lawmakers in the Climate Solutions Caucus see it as an example of a small, bipartisan step to address climate effects (E&E Daily, May 17).

"Legislators can’t ignore the damage that’s already been done to communities across the country," Wirzba said.

But bigger steps such as carbon pricing may have to wait for more vocal leadership, in Congress and in the White House.

While the Republican Party platform in 2008, when Sen. John McCain (R-Ariz.) was the presidential nominee, included an entire section acknowledging the human impact on climate change, the 2016 document barely mentions it, except to say that the U.N. Intergovernmental Panel on Climate Change "is a political mechanism."

Leiserowitz said the party’s voters have been gradually working back to the center on the issue, but their opinion still relies in part on the voice of their elected leaders.

"Partisans tend to look to their trusted leaders to guide them about issues, especially issues like climate change that seem abstract," Leiserowitz said.

Right now, for Republicans, that means President Trump, who has moved to roll back the Obama-era Clean Power Plan and pull out of the Paris climate agreement.

Rep. Brian Fitzpatrick (R-Pa.), co-sponsor of Curbelo’s carbon tax bill, nodded to that idea last week at a policy discussion sponsored by The Hill and the Bipartisan Policy Center.

"Even if it is not a top issue in the polls, true leaders lead the polls, they don’t follow them," he said. "We need to make this an issue."