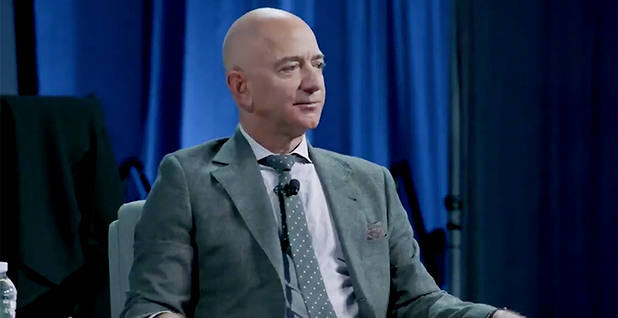 Amazon.com Inc. said yesterday it would create a $2 billion fund for investments in "visionary" companies working on low-carbon energy technologies and solutions, adding to a recent series of climate initiatives from the technology giant.

The fund is intended to support companies that can help Amazon hit its 2040 goal of eliminating or offsetting all of its greenhouse gas emissions, which are at a level rivaling that of many small countries. A handful of other corporations have also made parallel emission pledges.

According to the Amazon announcement, funds could go to a variety of sectors, including power generation, transportation, manufacturing and agriculture. Beneficiaries could include startups that haven’t moved a single unit of their product to large partners looking to bring early-stage ideas to scale.

"We expect that the portfolio of investments made by The Climate Pledge Fund will vary by amount and stage of company," an Amazon spokesperson wrote in an email to E&E News. "The objective of the Fund is to invest in companies building products and services that will enable Amazon and other companies to decarbonize their operations and increase overall sustainability."

The company also released data on its carbon footprint yesterday, saying its CO2 emissions had increased 15% in 2019 compared with the previous year, though they fell 5% for every consumer dollar spent.

The initiative follows a $10 billion pledge of funding for climate scientists, activists and researchers from CEO Jeff Bezos in February.

Clean energy innovation researchers praised the move, saying that it would complement work by federal researchers and the $1 billion in funding from a separate initiative led by Bill Gates — Breakthrough Energy Ventures — to help deploy early-stage zero-carbon technologies.

"This is both a helpful and timely investment given the progress we need to make on climate and the risk that economic recession poses to clean energy investment," said Dan Reicher, a former director of climate initiatives at Google and senior research scholar at Stanford University.

But Amazon’s announcement is unlikely to ease pressure from its climate critics, including environmental justice activists and some of its own employees, who have criticized the company for partnering with oil and gas industries and contributing to diesel pollution in communities of color.

Amazon Employees for Climate Justice, a group that has campaigned vigorously for Bezos and the company to ramp up its climate work, called Amazon’s rising carbon footprint "alarming" and wrote that the Climate Pledge Fund should find ways "to reduce emissions in frontline communities first as Amazon’s emissions and health-harming diesel pollution impacts Black and Brown communities hardest."

Some researchers have also raised questions about whether clean energy and climate initiatives directed by billionaires like Bezos are a net positive for emissions.

"He could have a positive impact, but it definitely threatens a basic principle of democracy, of self-governance. We’re giving up governance of how we decide on climate change to the planning, the grandiosity and the whims of the world’s richest man. And that’s something we should be concerned about," said Matt Nisbet, a professor of communications, public policy and urban affairs at Northeastern University who has studied the role of philanthropists in climate change policy.

"One thing with Bezos and Amazon is, you can’t overlook the fact that there’s a huge PR, green washing aspect," he said. "Even if he firmly believes that climate change is an important issue — and he should, because it impacts his supply chains and deliveries — at the same time, he’s part of the problem. He’s created this huge engine for consumerism and wasteful global trade."

Still, the $2 billion pledged by Amazon would compare favorably to the $2.77 billion allocated to the Energy Department’s Office of Energy Efficiency and Renewable Energy, which develops early-stage, high-impact technologies, said Reicher of Stanford.

"All this private money, if spent well and used in conjunction with public dollars — each would leverage the other," he said.

Reicher, who has long advocated for public programs designed to help lure long-term investment for early-stage energy technologies, noted that Amazon seemed willing to support companies during the arduous, time-consuming period of scaling up a technology — a period considered too risky for many investors.

"You’re investing in a higher-risk stage that gets you out of the laboratory and to a technology that’s ready for a full-scale commercialization. And that’s very helpful," he said.