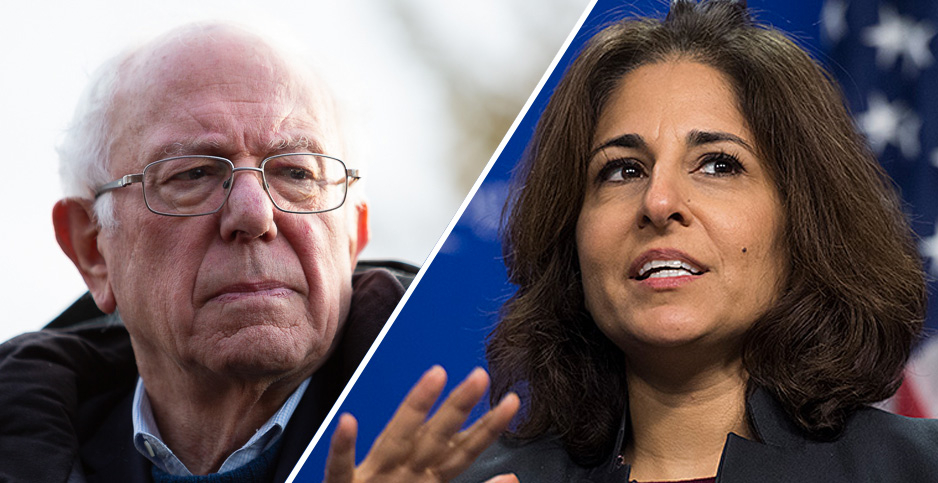 Neera Tanden, President Biden’s nominee to lead the Office of Management and Budget, may be one of the indirect winners of Georgia’s recent runoff elections.

Tanden, a longtime Democratic operator and policy expert, has emerged as one of Biden’s more controversial nominees. Democratic control of the Senate should ease her path to confirmation.

Yet Tanden will first have to get past Sen. Bernie Sanders. The Vermont independent is expected to chair the Senate Budget Committee, which will weigh Tanden’s nod.

Once a longtime Hillary Clinton confidant, Tanden has clashed with Sanders and his supporters since the bitter 2016 Democratic presidential primary.

And some in the progressive wing of the Democratic Party say her allegedly incremental approach to health care and climate change policies will lead to global disaster.

A Sanders staffer declined to comment for this story. Sanders himself recently refused to answer a reporter’s question about Tanden.

Republicans, meanwhile, have complained that Tanden — who has headed the left-leaning Center for American Progress — has been mean to them online. Sen. John Cornyn (R-Texas) has been particularly vocal against her.

Tanden, an Indian American who grew up on food stamps and in public housing, would offer an approach to budgets that emphasizes how government programs affect real people, her supporters say. OMB has in past years been led by finance executives and attorneys.

"OMB is the central nervous system," Tanden said on a recent panel hosted by the Business Forward Foundation. "It is the way the president connects to all of the agencies and ensures the agencies are implementing his agenda."

Tanden worked for Clinton’s 2008 campaign. She also held a top health care post in the Obama administration, shepherding the Affordable Care Act through Congress. As a result, her record on health care outstrips her record on the environment and climate.

This month, she vowed to invest federal dollars in historically underserved communities that have been victims of environmental racism.

"That will be crucial," said Jamal Raad, executive director of Evergreen Action, adding, "[Environmental issues] have not been her policy background, and that’s why it’s incumbent on her in her policy hearings to show an understanding of it and show how she will engage and show an all-of-government approach to climate that the Biden team has talked about."

At CAP, Tanden assembled a qualified team of climate experts, Raad added. "She’s going to have to replicate that at OMB," he said.

Soon after Biden announced his intention to nominate Tanden in November, many Democratic lawmakers were quick to throw their support behind her.

Sen. Gary Peters (D-Mich.), who is expected to chair the Homeland Security and Governmental Affairs Committee, called her a "highly qualified nominee" who would help the administration deliver aid to Americans and fight problems like climate change.

Critics lament that Tanden has seldom veered from views shared by the Democratic Party’s establishment wing on climate and other issues.

"I think she has been more of a mouthpiece than a leader," said Mitch Jones, government affairs director with Food & Water Watch.

Briahna Joy Gray, a former spokesperson for Sanders’ 2020 presidential campaign, slammed Tanden last year. "Neera Tanden supports cuts to the social safety net, which, like a Republican, she refers to as ‘entitlements,’" Gray wrote on Twitter, posting a C-SPAN clip from 2010.

On the internet, Tanden has frequently sparred with progressives, including filmmaker Josh Fox, an anti-fracking advocate, who in 2018 accused her of "neoliberal privilege," prompting a Twitter fight over "progressivism."

She took down some of the exchange in a 1,000-tweet purge just before Biden nominated her for the post. She left up a comment saying she didn’t have a second home growing up.

And she tweeted at Fox that she supported "massive public investment in renewables" and a carbon tax "that has massive rebates for lower income."

Later, in 2019, she was quick to laud the Green New Deal. In a press release after Rep. Alexandria Ocasio-Cortez (D-N.Y.) introduced the resolution, she and CAP founder John Podesta declared it could "help America make the right investments to build a 100 percent clean energy economy."

But Fox has remained unconvinced, and in an interview he called CAP a "pro-fracking organization," pointing to the Obama administration’s track record and a fight over whether to include a fracking ban in the party platform.

"There is no Green New Deal without a ban on fracking," Fox said.

He added that he supports Biden and welcomes his climate-focused policies. In fact, he has already interacted with the president.

In 2011, Fox and leading environmentalist Bill McKibben called on Biden to kill a fracking project in Delaware. Fox said he believes Biden personally made a call to help kill the project.

But he assailed Tanden as a "terrible ambassador," saying, "She’s belittling; she picks fights on Twitter. Just seems like the wrong note to start what is going to be a four-year battle."

Tanden did not return an interview request.

Progressives in Sanders’ circle remain bitter that CAP, under her leadership, shut down the news outlet ThinkProgress, which was firewalled from the think tank.

The shutdown came after Tanden accidentally outed the name of a sexual harassment victim in an all-staff meeting. The news outlet covered the incident, and tensions intensified.

People who know Tanden laud her for being sharp, clever and warm, even if she has been known to fire off cutting tweets.

Sally Katzen, an OMB official from the Clinton administration, thought Tanden might have some "tense moments" on Capitol Hill but added that those are not unusual in a confirmation process.

"The Republicans may try to drag it out, but I am confident she is going to be confirmed and she should be," Katzen said.

"She’s got the credentials; she’s got the background; she’s got the knowledge. She brings a refreshingly broad background to OMB — not only about the budget but the importance of science, data, analysis and personnel, which is critical for OMB’s role with respect to all of the different functions of government."

Sean McElwee, director of Data for Progress, also expressed confidence. He laughed off the idea that Republicans called her tweets hostile, saying: "None of her tweets have started a violent, deadly riot on the Capitol."

McElwee said he doubts Sanders will kill her shot. "She’s not a budget hawk," he said. "She’s not going to seek blue-ribbon panels to slash spending."

He added in an interview last week: "Biden has picked a solid Cabinet that is well qualified. It is obviously possible that during the vetting phase, things could come out, but [Trump] is dominating the news cycle, leaving little attention for these nominees."

Sanders last week dismissed a question about Tanden in an interview with The New York Times, saying, "Let me not worry about Neera right now."