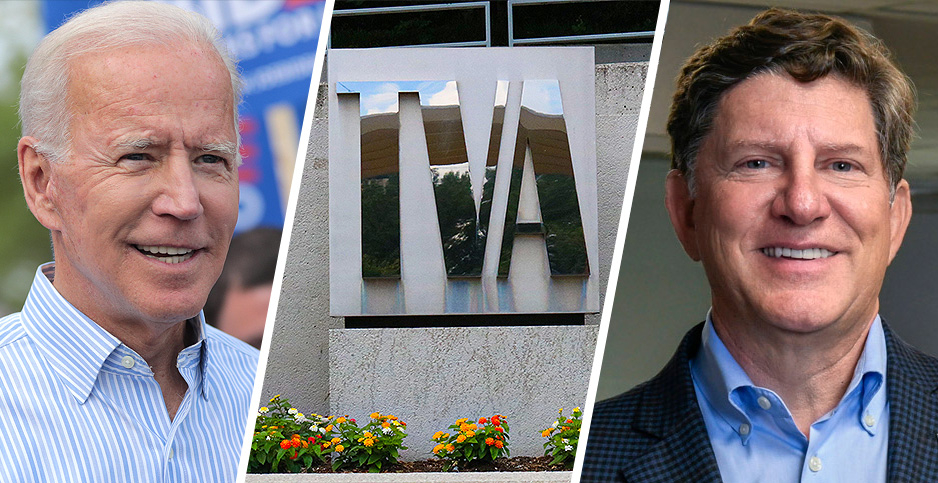 The Tennessee Valley Authority is likely to stay out of the political spotlight during the Biden administration, but the nation’s largest public utility is poised to play an outsize role in pushing the president-elect’s clean energy agenda.

President-elect Joe Biden has the opportunity to remake TVA’s influential nine-member board, with the chance to make as many as six nominations next year. What’s more, clean energy advocates are hoping Biden’s wide-ranging climate platform will lead TVA to adopt more aggressive carbon-cutting and energy efficiency plans and use new technologies to clean up its power grid.

From embracing "smart home" devices to doubling down on electrification efforts, "TVA can be a living laboratory," said Maggie Shober, director of utility reform at the Southern Alliance for Clean Energy (SACE).

At the same time, observers say the federal agency, which sells power generation across seven states, should be able to operate absent presidential Twitter attacks or knee-jerk reactions from the White House. In the past two years, President Trump has attacked TVA CEO Jeff Lyash’s pay; publicly criticized the agency for its plans to outsource computer programming jobs; and fired two board members, including the chairman (E&E News PM, Aug. 3).

Trump also went after TVA via Twitter when it was weighing whether to shutter a coal-fired power plant in Kentucky.

Coal is an important part of our electricity generation mix and @TVAnews should give serious consideration to all factors before voting to close viable power plants, like Paradise #3 in Kentucky!

"I have never seen TVA get swept up into this political dynamic at the level they are at right now," said Stephen Smith, SACE’s executive director.

Environmentalists instead want Biden to put a green twist on TVA’s roots in President Franklin Roosevelt’s New Deal in the 1930s. While Biden has taken pains to distinguish his own climate plan from the Green New Deal backed by some Democratic lawmakers, advocates hope that the spirit of the proposal will shine through.

"There’s a way for TVA to serve as a model for the rest of the country, and I think that’s the opportunity Biden can grab," said Jonathan Levenshus, federal campaigns director for the Sierra Club’s Beyond Coal campaign.

"TVA is never going to solve the climate problems by itself, but it can be a vehicle," he said.

Shober noted that TVA has underinvested in energy efficiency, which can create jobs and reduce energy consumption as technology evolves, leading to cleaner air and lower bills.

"What are the cutting-edge technologies going on, what are the smart home technologies, and how do we get those into low-income communities?" Shober said. "Then [TVA’s] best practices can be exported around the country to be used by utilities that are going carbon free."

TVA also has the financial wherewithal to make big changes.

The utility has shored up its balance sheet in recent years, cutting its debt to $21.4 billion, a level that beats a commitment to the Office of Management and Budget. It also has locked in electricity rates for the next 10 years.

"You heard them say repeatedly, ‘Our debt is the lowest that it’s ever been,’ so now is the time to try to do some of those really unique policies that they can take advantage of," he said. For example, he said, TVA could finance new projects by issuing low-cost debt or sell bonds at a low interest rate.

Some of those decisions hinge on TVA’s nine-member board, which Biden is set to shape. All currently sitting appointees are Trump’s picks, because he did not reappoint any board members from the Obama administration — but their five-year terms will expire while Biden sits in the White House.

The board now has a five-member quorum, with four vacancies. The Senate, which vets and confirms TVA board selections, has not voted to confirm two picks, and a third is still awaiting action from the Senate Environment and Public Works Committee. A fourth nomination has not been made.

If the Senate does not confirm the nominations before January, that would give Biden the chance to fill as many as six slots in 2021. Then, two board members have expiring terms in 2022, and another one in 2023.

But if Democrats win two Georgia Senate runoff elections Jan. 5, flipping the Senate’s balance of power in their favor, TVA would have a greater chance of pursuing a more progressive agenda and the opportunity to elevate its presence on the national climate agenda.

If the Senate stays under GOP control, Biden would have to get his picks past Majority Leader Mitch McConnell (R-Ky.), who tried to prevent TVA from closing an aging, inefficient coal-fired power plant in his home state (Greenwire, Feb. 14, 2019).

And with recent U.S. protests over racial inequity, combined with the Biden administration’s focus on environmental justice and stated commitment to diversity in staffing picks, there’s hope that TVA’s all-male, all-white board could look different.

"That’s just not reflective of the Valley," Shober said.

Lyash, TVA’s CEO, is leaving questions about future board picks to the TVA Congressional Caucus, the White House and ultimately the Senate.

"We’re committed to working with those board members constructively to deliver results to the Valley," he said.

There is another dynamic at play. Longtime Sen. Lamar Alexander (R-Tenn.), perhaps TVA’s chief political ally, announced in December 2018 that he would not seek a fourth Senate term, and he is set to be succeeded by Sen.-elect Bill Hagerty (R) in January.

Alexander chairs the Senate’s Energy and Water Development Appropriations Subcommittee and is known for being a staunch supporter of nuclear power and a critic of renewable energy, particularly wind power.

Smith argues that Alexander has micromanaged TVA and is probably the chief reason why the utility doesn’t have much wind to speak of on its system.

Alexander recently warned TVA not to follow the example set by California, criticizing the Golden State for adding renewables and backing away from nuclear. A spokesman for Alexander’s office emailed the comments to E&E News in response to questions about the lawmaker’s critics.

"The combination of that nuclear power, hydropower and natural gas in Tennessee has given us one of the cleanest areas," he said recently on the Senate floor. "So we need a realistic energy policy, not a fanciful one."

Alexander used the opportunity there and again in a video message to TVA’s board to take aim at California — a popular whipping post for Republican elected officials in the South who work on energy issues — arguing that the state’s electricity rates are high because of its clean energy policies.

"They are in for an unpleasant future," he said.

California’s retail electricity rates average 16.9 cents a kilowatt-hour, ranking the state seventh-highest in the country, according to the U.S. Energy Information Administration. Conversely, Tennessee’s average retail rate is 9.7 cents per kWh, putting it at 28th.

Energy consumption is typically higher in the Southeast, however, because of the intense summer heat, old housing stock and weak building codes. This leads to higher monthly utility bills.

Alexander has defended TVA’s approach, including use of carbon-free nuclear power.

"I’m very proud of the direction that TVA is going, and I hope you are, as well," said Alexander, who spoke via video to TVA’s board during its most recent quarterly meeting, held earlier this month. "I especially like that over the years — I’ve talked to most of you about this — you haven’t gotten seduced by exotic new forms of electricity until it’s proven."

Alexander was talking about solar, which he said is "not anything we can possibly count on" until battery technology matures. As for wind turbines, they would destroy the natural beauty of the state, he said.

"I don’t want to see TVA or anybody do that," he added.

Environmentalists want TVA to use Biden’s climate focus to drill down on the utility’s mission: delivering wholesale electricity rates at the lowest feasible price, environmental stewardship and economic development. In other words, they hope TVA ramps up its carbon-cutting plans in the name of creating a robust clean energy economy for the region.

TVA’s neighbors, investor-owned utilities Duke Energy Corp. and Southern Co. in North Carolina and Georgia, have goals to become carbon neutral by 2050. TVA is on track to cut 70% of its carbon emissions by 2030 but hasn’t set targets beyond that.

The Biden administration wants to decarbonize the U.S. power sector by 2035.

"TVA should not only be leading but exceeding the goals of the Biden administration," Smith said.

This can play out in everything from using transmission lines to transport wind energy to ensuring that "smart" devices that control energy use are distributed to low-income residents to help close the energy gap that plagues the Southeast, he said.

For its part, TVA is a member of the Low-Carbon Resources Initiative, designed to commercialize technologies that are alternatives to natural gas (Energywire, Aug. 11).

"And it takes risks off the table," Lyash told E&E News this week during a conference call about the utility’s earnings.

"This has been consistent for us for Obama, Trump and whoever’s administration is next," he said.

TVA’s board hired an outside firm to review the CEO’s pay, emphasizing that such an action is not a reflection on Lyash. The CEO earned $8 million last year — less than many peer utility chief executives but enough to make Lyash the highest-paid federal employee (Energywire, Aug. 28).

TVA’s board did not make any changes to the CEO’s compensation for fiscal 2021, which started Oct. 1, arguing that it would not make sense to do so until the independent review is finished. It is expected to discuss the issue by the February 2021 board meeting.

Alexander used his video message to praise Lyash’s performance, however.

"If Jeff Lyash were a Tennessee football or basketball coach, instead of trying to cut his salary, maybe raise his salary, because I think your scorecard is very good," he said.