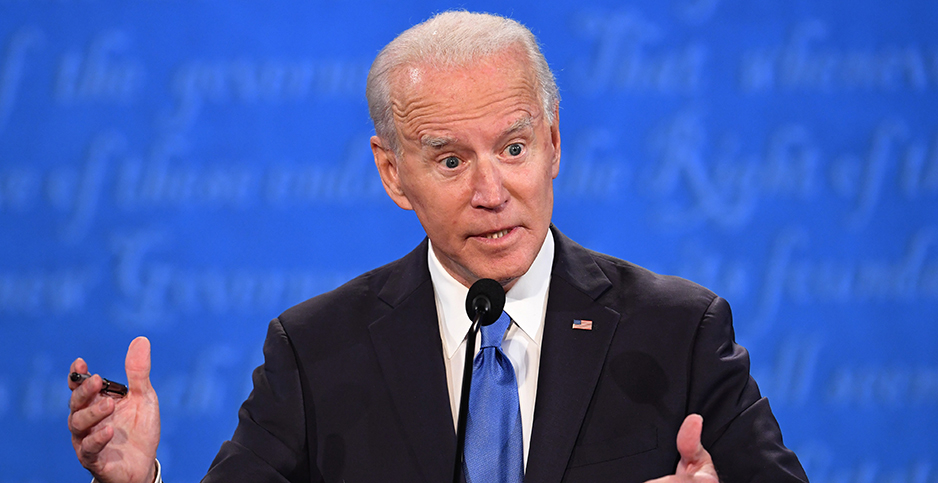 President Trump and his supporters wasted little time in making a campaign message out of Joe Biden’s promise of a "transition" away from oil, but it’s unclear if it could move votes for Trump with 11 days left in the campaign.

Trump, lagging in polls in some crucial swing states, may be betting that voters in states like Pennsylvania and Ohio would be turned off by the comments, arguing that Biden threatens oil industry jobs and low energy prices.

"If Biden gets in, not only will he destroy the Oil & Gas industry (and millions of American jobs and lives), we can all say goodbye to these unbelievably good gas prices," Trump’s son Eric tweeted this morning, with a photo from a gasoline station showing $1.839 per gallon.

Gas prices are below $2 per gallon in 10 states today, according to AAA, mostly in south-central states like Texas near the Gulf of Mexico.

Trump adviser Jason Miller said in a call with reporters that the comment likely "put the nail in the coffin" for Biden in the Keystone State, and probably in Ohio and Minnesota as well.

But with millions of ballots already in from early and mail-in voting, and with Trump behind in the polls less than two weeks before the election, it’s not clear Biden’s comment that he "would transition from the oil industry" because it "pollutes, significantly," will make much difference in the presidential race (E&E Daily, Oct. 23).

"That interchange might not persuade many voters outside the oil patch, but we would not be surprised if groups affiliated with the Trump campaign were to put it on heavy rotation in the two major producer states that are also swing states in this year’s election, Pennsylvania and Texas," ClearView Energy Partners wrote in a note to clients this morning.

But even in those states, Trump might not get much of a boost by painting Biden as anti-fossil fuels.

A Franklin & Marshall College poll this year found voters in Pennsylvania — the site of one of the largest hydraulic fracturing-fueled booms — favoring a ban on fracking by 48% to 39%, part of a decadelong decline in support for the practice in the college’s polling. Even among Republicans, nearly a third oppose it.

Still, Biden’s comments could feed the messaging against moderate Democrats on the ballot who support the industry, such as Reps. Xochitl Torres Small in New Mexico and Kendra Horn in Oklahoma, said Frank Maisano, a senior principal at Bracewell LLP, which represents a mix of energy companies.

Torres Small, for instance, is already moving to shore up her image in the oil-rich southern half of New Mexico against attacks that tie her to opponents of the industry in the Democratic Party.

That includes an ad that features images of her touring a drilling site and noting her opposition to a proposal from Rep. Alexandria Ocasio-Cortez (D-N.Y.) that would have banned hydraulic fracturing.

Torres Small tweeted last night that she disagrees with Biden.

"Energy is part of the backbone of New Mexico’s economy," she wrote. "We need to work together to promote responsible energy production and stop climate change, not demonize a single industry."

I disagree with VP Biden’s statement tonight. Energy is part of the backbone of New Mexico’s economy. We need to work together to promote responsible energy production and stop climate change, not demonize a single industry. 1/2

The National Republican Congressional Committee, the House GOP’s campaign arm, tried to link the "transition" idea to Democratic Rep. Conor Lamb of Pennsylvania, who is facing a challenge from Republican Sean Parnell in an oil- and gas-heavy district.

"Conor Lamb and Joe Biden are one in the same and both have failed to protect Western Pennsylvania’s oil industry and the thousands of Pennsylvania jobs that rely on it," NRCC spokesman Michael McAdams said in a statement highlighting Biden’s remarks.

Even if Democrats win back the White House and Senate, Biden’s comment last night highlights the rift between progressives and moderates that the party would have to deal with next year, Maisano said. And progressives have largely dominated the conversation on climate during the election season.

"That’s the point that Trump is making so inarticulately and ineffectively. He’s saying, ‘You know who’s going to be in charge of policy? AOC,’" Maisano said. "He’s saying it in a way that everyone mocks him for, but the reality is, that’s right."

While Biden’s remarks were notable for being direct, they’re not a complete departure from his previous statements on the subject.

He didn’t identify a timeline or what he would do to transition off oil, and his climate plan proposes to boost electrification in transportation — the biggest market for oil — decarbonize electricity by 2035 and bring the entire economy to net-zero greenhouse gas emissions by 2050.

Biden also wants to ban new oil and gas permitting on public lands and to eliminate tax breaks for the industry, points he brought up again at the debate last night.

Biden’s campaign tried to lessen the impact of the statement following the debate, by both saying he was referring to something else and downplaying the impacts of a transition from oil.

"I think he was very clear in his answer. … He was saying he was going to eliminate oil subsidies," deputy campaign manager Kate Bedingfield told reporters. "Writ large, the idea of transitioning off of oil is nothing new."

"Let’s be really clear about this: Joe Biden is not going to ban fracking," she told reporters before a campaign event in Atlanta today.

"He is going to deal with the oil subsidies. But that’s — you know, the president likes to put everything out of context. But let’s be clear: What Joe was talking about was banning subsidies, but he will not ban fracking."