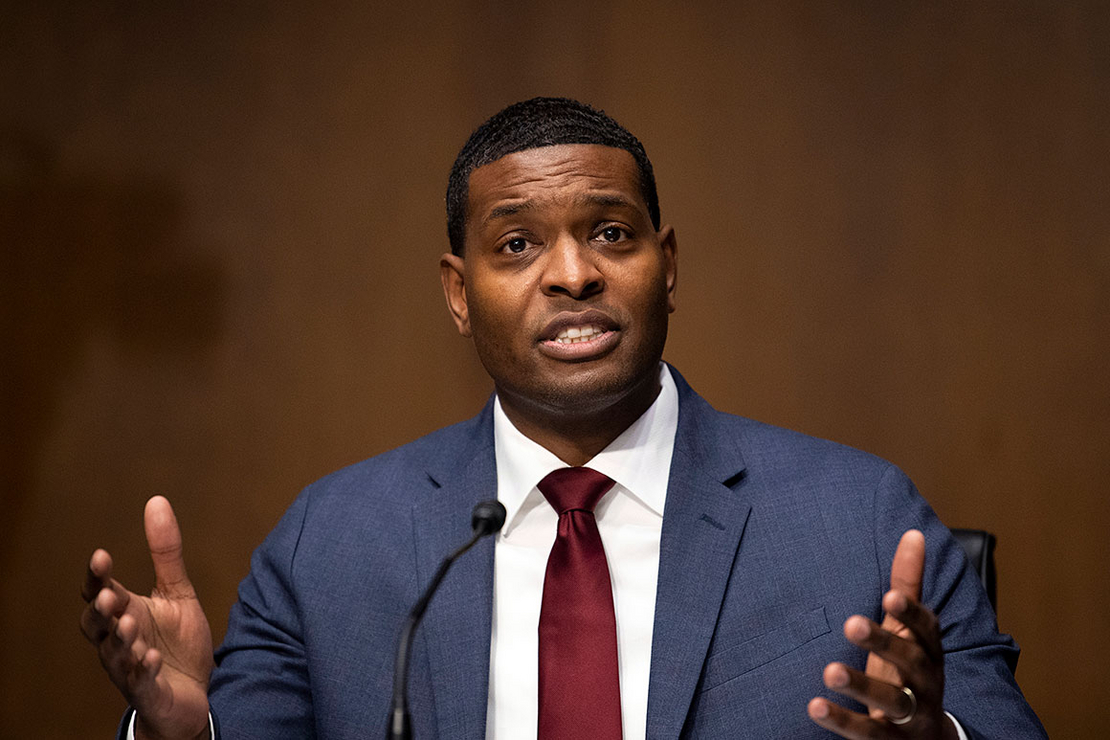 EPA Administrator Michael Regan has been unclear about whether the agency will regulate power plant carbon emissions. Caroline Brehman/Pool via AP

The uncertainty over EPA’s approach partially reflects Biden’s push to find a legislative solution to power plant emissions in the form of a clean electricity standard. It’s also a result of an early executive order, which directed the agency to focus on emissions standards for cars, new oil wells and toxic air pollutants from power plants.

But they maintain that federal regulations for power plants remain a crucial component of the administration’s efforts to cut emissions 50% of 2005 levels by 2030. Most studies show the majority of emissions reductions in the next decade would come from power plants (Climatewire, July 12).

Implementing rules in the power sector is notoriously time consuming. It took the Obama administration nearly four years to write the Clean Power Plan, only to see it stall in court, before it was scrapped by the Trump administration. The rollback crafted by Trump’s EPA met a similar end. It was tossed by a federal appeals court in January (Greenwire, Jan. 19).

Eight environmental groups wrote a letter to the administration in April, urging EPA to outline a plan for regulating greenhouse gases from power plants.

“Time is going through the hourglass,” said David Doniger, a lawyer at the Natural Resource Defense Council.

He argued that it’s important for the administration to advance carbon strategies on both the legislative and regulatory fronts simultaneously, noting “neither pathway is 100% sure of working.”

“You have to have a plan A and a plan B, and plan A and plan B are really one plan,” Doniger said. “For the stakeholders in the power sector to see EPA is moving down the tracks could influence more people to say to Congress that you’ve got to come to closure on a CES. There is an interaction among these things, that one alternative is a backup to the other.”

But the path forward is complicated by legal uncertainty. The Clean Power Plan represented a relatively novel approach to emissions reductions. It focused on cutting carbon across the electricity system, and would have allowed utilities to trade emissions credits. In industry jargon, the approach was often referred to as “beyond the fence line."

Yet that path was undermined by a Supreme Court stay in 2016, which halted the plan’s implementation even before the underlying case rose to the high court. The Supreme Court has grown more conservative in the years since, leading many to speculate the agency will pursue a so-called inside the fence-line strategy that focuses on standards for individual plants.

If there is a difference from four years ago, it is a lack of acrimony thus far between EPA and the utility industry. Power companies were deeply divided over the Clean Power Plan, with some supporting it and others fighting it in court. U.S. power plant emissions fell 37% between 2005 and 2020, exceeding the 32% reduction target that the Clean Power Plan was supposed to hit in 2030.

This year, the Edison Electric Institute, the utility industry’s most powerful trade association, has signaled it is willing to support a clean electricity standard.

“We’ve had several positive engagements with the administration on a number of fronts, and we look forward to continue working with them on our industry’s continued clean energy transformation,” said Alex Bond, EEI deputy general counsel. “It is clear they are prioritizing a number of different things, and this is going to come up in the chute at some point. We are waiting for some indication from them about which way they’re going to go, but they are clearly thinking about it.”

Gina McCarthy, a former EPA administrator and Biden’s top domestic climate adviser, said in an interview last week that she had seen a shift in the industry. More than 20 utilities responsible for about half of U.S. power sector emissions have net-zero or carbon-reduction targets, according to IHS Markit, a consultancy.

But it’s unclear what EPA’s approach to power plant emissions will be. Agency officials, in a statement, pointed to a statement by Administrator Michael Regan, who pledged to take a fresh look at the issue during his confirmation hearing in February (Climatewire, Feb. 9).

“There should be no doubts about this administration’s commitment to meaningfully address climate change,” EPA officials said. “Work is underway, and we hope to be able to share more information soon.”