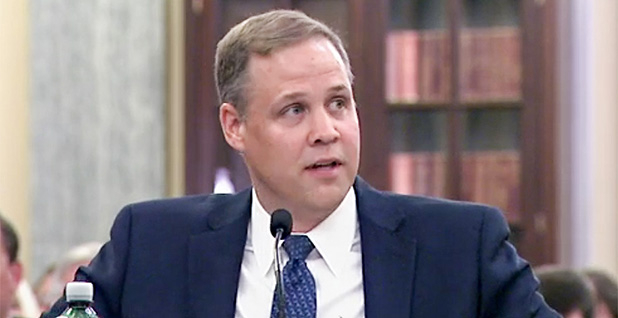 Will the first politician to lead NASA politicize it?

That was the central question left unresolved yesterday as Rep. Jim Bridenstine testified before the Senate Commerce, Science and Transportation Committee about heading the nation’s space agency.

NASA is one of the world’s premier climate science offices. Yet Bridenstine, a 42-year-old three-term Republican congressman from Oklahoma, has expressed skepticism about humans’ influence over global warming. He once asked former President Obama to apologize for spending so much money on climate research. He has blamed solar cycles for rising temperatures, something that mainstream scientists would dispute. He’s also expressed support for moving earth science out of NASA.

That Bridenstine did not show up yesterday.

Instead, he was a gentler leader who blamed his history of controversial statements on political campaigns and garden-variety Washington partisanship, which was something he had always intended to leave behind. He acknowledged humanity’s role in climate change, though he stopped short of accepting that humans are the primary driver of global warming. He said he would support efforts to find solutions to the greatest challenges faced by the planet. He even called for a bipartisan embrace of NASA, even though he has criticized lawmakers in the past for bipartisan solutions.

"Should I be confirmed, it will be my intention to build off the work done by the great people at NASA during the last administration," Bridenstine said in his opening remarks. "We must all do this together."

In the past, Bridenstine has said he would be open to moving earth science out of NASA. After yesterday’s hearing, he told E&E News that he would not do that.

As has been the case at a number of Trump administration confirmation hearings, Democrats pummeled the nominee while Republicans ran interference. Though three other nominees for positions at other agencies sat beside him for 2 ½ hours, nearly all of the questions and comments from lawmakers were directed to Bridenstine. They mostly centered on climate change.

What separates Bridenstine’s nomination from that of Scott Pruitt at U.S. EPA or Rick Perry at the Energy Department, both of whom have questioned mainstream findings on warming, is that NASA is the world’s premier climate science agency. It has a $2 billion budget for its Earth Science Division, and it tracks key metrics showing that humans are transforming the planet at a rapid pace. NASA has helped record global temperature spikes, shrinking sea ice and the steady climb of atmospheric carbon dioxide.

Critics are concerned that placing someone who rejects basic science at the agency’s helm could harm our understanding of the changing world.

Sen. Bill Nelson (D-Fla.), the panel’s ranking member, used much of his time to talk about why Bridenstine is the wrong pick for the job, pointing out that as a member of the conservative Freedom Caucus, Bridenstine spoke out against gay marriage and transgender bathroom protections. Nelson said Bridenstine’s record is as "divisive and extreme as any in Washington."

"Obviously this is uncomfortable, obviously this is not fun, but it is my responsibility as the ranking member to bring out the kind of relationships and acts and words that the nominee has before us for the consideration of the committee," Nelson said.

For his part, Bridenstine has rejected the notion that he would politicize NASA. When pressed by Sen. Ed Markey (D-Mass.) about whether he would reassign climate scientists, Bridenstine said he would not. Some climate researchers at other agencies, including the Interior Department, have said they were reassigned to different jobs as punishment for their work.

"I will not punish them," Bridenstine responded. "I’m not going to reassign anybody based on that, because that would be punishment."

Lawmakers evoked the names of two historical figures who loom large over science, Galileo and James Webb, the late NASA administrator who guided the agency as it prepared to send a man to the moon.

Webb has been invoked as a counterpoint to critics of Bridenstine, who point out that he does not have a science background. Most modern administrators have extensive scientific training. Webb was not a scientist, either, and his stewardship of NASA was viewed as a golden age, when the agency was efficient and ramping up for one of humanity’s brightest moments.

Galileo’s name is often invoked by climate skeptics, since there are a relatively small number of them claiming the opposite of what the majority of scientists find. Galileo was persecuted by the Catholic Church in the 17th century for his support of Copernicus’ discovery that the Earth revolves around the sun. In his defense of Bridenstine’s fitness for the job, Sen. Roger Wicker (R-Miss.) compared the lonely work of climate change skeptics to Galileo and Copernicus’ revolutionary findings.

In one tense exchange, Sen. Brian Schatz (D-Hawaii) tried to pin down Bridenstine on whether he was explicitly rejecting the viewpoint of scientists he would oversee. Schatz said that "only in the halls of Congress is this a live debate," and he pushed Bridenstine to answer if he agreed with the consensus of climate scientists.

Bridenstine: "If that’s the scientific consensus, that it’s primarily driven by human activity, what I will tell you is that human — "

Schatz: "You don’t know that that’s the scientific consensus?"

Bridenstine: "Sir, I would say that human activity is absolutely a contributor to the climate change that we are currently seeing."

Schatz: "What is the scientific consensus about climate change?"

Bridenstine: "I think right now, we’re just scratching the surface as to the entire system of the Earth, and one of the great missions of NASA is the Earth Science Division of the Science Mission Directorate, and with your help and support, we want to make sure that we’re getting absolute best science. NASA is the only agency in the world that can do this kind of science, and really the best agency in the world, and we need to make sure that we’re understanding it better every day."

Though he has been one of the most outspoken and partisan members of Congress, Bridenstine said that at NASA, he wants to "leave behind a legacy that the next administration, regardless of political party, can follow up on."

"I want to make sure that NASA remains, as you said, apolitical, and I will do that to the best of my ability should I be confirmed," he said.

The full Senate is expected to vote on his confirmation as soon as next week.