Will climate action this year matter in the midterms? 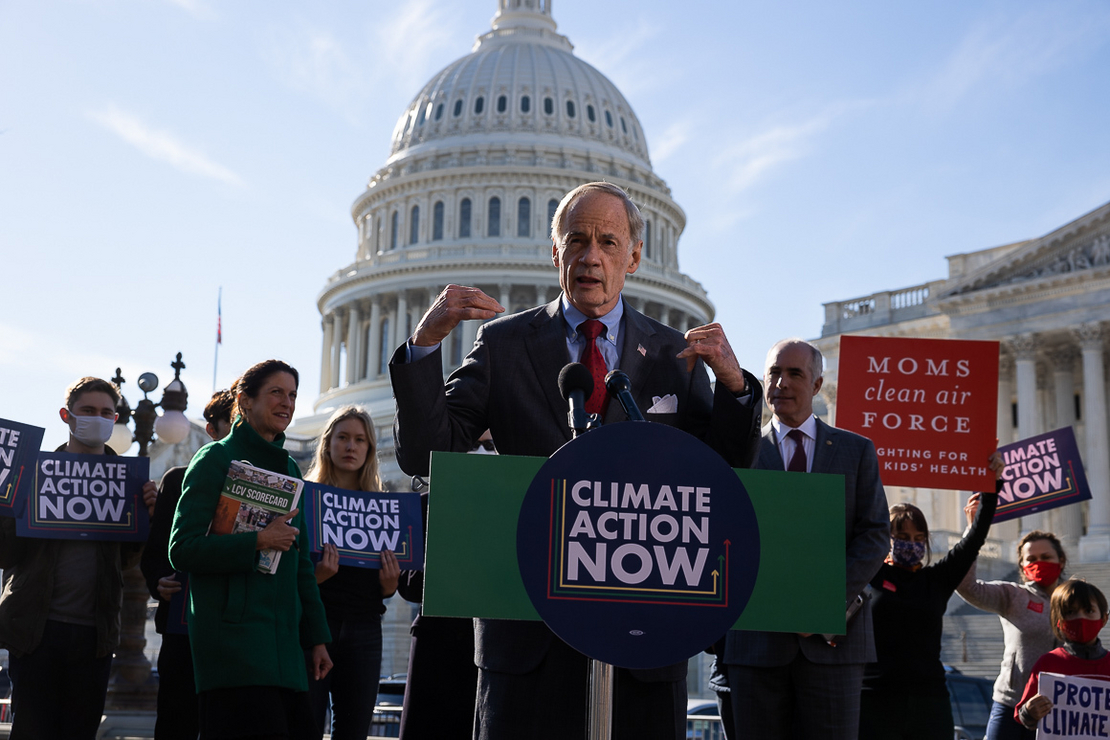 Congressional Democrats think they’ve found a way to head off the trouncing they’re expected to receive in the midterm elections: Pass their aggressive climate change agenda.

As congressional leaders and President Biden pick up the pieces and plot the future for at least some provisions of the $1.7 trillion “Build Back Better Act,” many Democrats are pushing for the $555 billion in climate spending, and tying it to the elections.

Supporters argue that voters will reward Democrats in November if they pass the massive package that includes new electric vehicle subsidies, clean energy tax incentives, funding for electric grid infrastructure and other policies.

They are offering warnings that voters who gave Democrats control of the White House, Senate and House in the 2020 election cycle might not return to the polls if they don’t deliver on the high expectations they set on climate.

“Voters want us to get stuff done. I think most voters realize that climate change is real, it’s getting worse, not better, and we need to do something,” Senate Environment and Public Works Chair Tom Carper (D-Del.) told reporters. “And to the extent we can do something to create some jobs, I think they’re all for that.”

Democrats across the ideological spectrum have relentlessly messaged the bill’s $550 billion in climate spending with a heavy focus on impacts of more severe extreme weather and potential jobs and macroeconomic benefits of robust government support for clean energy (E&E Daily, Dec. 3, 2021).

The climate provisions are one area of the massive bill that Democrats agree on the most, a stark change from over a decade ago, when the party tried and failed to pass major climate legislation (E&E Daily, Oct. 5, 2021).

The climate provisions are “past the point of being controversial,” said Rep. Jared Huffman (D-Calif.). “Politically, I think the country is ready to lean in on climate action.”

Many see direct local impacts of more threatening wildfires and rising sea levels — and a potential point of contrast with Republicans.

“When I think about climate change, I think about the planet not dying and my constituents not having 4 feet of water in their basement every time there’s a storm. It’s even more important than the midterms, believe it or not,” said Rep. Tom Malinowski of New Jersey, one of the most vulnerable Democrats going into the midterms.

Paul Bledsoe, a former White House climate aide who is now a strategic adviser for the Progressive Policy Institute, said the job creation benefits of the clean energy provisions contained in the bill are also “an incredibly powerful message that Democrats should be confident will be valuable in the midterm election.”

“I really think being able to message the clean energy bill itself as an economic matter is of tremendous value for Democrats,” Bledose said.

If the Democrats don’t pass major climate policies on par with “Build Back Better,” they’re likely to face a “letdown issue” at the ballot box, said Barry Rabe, an environmental policy professor at the University of Michigan.

Biden, and by extension down-ballot Democrats, ran on the most progressive climate platform in history, promising more than $2 trillion to fight greenhouse gas emissions. While the House passed the “Build Back Better” bill in November with one Democrat defecting, Sen. Joe Manchin (D-W.Va.) blindsided the party in December when he announced he could not support the bill. He drove home that position this week, saying of the legislation, “It’s dead.”

Midterms, meanwhile, are almost always a challenge for the incumbent party, since it’s more difficult to get voters to the polls to preserve the status quo.

“Because of those very, very high expectations, you really face a letdown issue,” Rabe said. “And with midterms, you’re always worried, not so much about how people vote, but whether they show up to vote. And for more climate-minded voters, what might compel them to go to the polls in November?”

‘Depends which voters you ask’

Whether or not the “Build Back Better Act” can save Democrats at the polls is an open question.

Environmental organizations, left-leaning interest groups and nonpartisan polling outfits have published polls over the last six months showing that voters support the clean energy provisions of the bill. But climate change has historically been a polarizing issue that does not drive voter behavior in the same way as topics like health care and the economy.

Data for Progress, a left-leaning think tank, polled 1,326 likely voters last month and found that 65 percent supported the “Build Back Better Act,” with 64 percent in favor of the $555 billion in clean energy provisions.

But it’s less clear in the early stages of the midterm cycle how that could move swing votes and how much voters care about the D.C. politicking surrounding “Build Back Better,” said Anthony Leiserowitz, director of the Yale program.

“There are certainly many Democrats alarmed about climate change, who are paying attention and are disheartened by the lack of action. And some of them may thus feel disinclined to vote,” Leiserowitz said in an email. “And we know there are a sizable number of climate-alarmed voters who don’t or rarely vote.”

Rep. Sean Casten (D-Ill.), who ran for Congress as a climate expert in 2018 and is now facing a competitive primary campaign after redistricting, said the polling is ultimately low on his priority list when it comes to “Build Back Better.”

Rep. Matt Cartwright of Pennsylvania, another at-risk Democrat who voted for “Build Back Better” along with nearly all his colleagues, isn’t certain whether the climate package would be good for the party in the midterms.

“I think it depends which voters you ask,” he said.

“There are a lot of voters that really care about waging war against climate change,” he continued. “If the Democrats succeed in getting something done on that score, they’ll be happy.”

Cartwright was more confident, however, of the popularity of the Infrastructure Investment and Jobs Act, also known as the bipartisan infrastructure bill.

“I know that folks in northeastern Pennsylvania really appreciate the infrastructure law that we pushed through,” he said, ticking off its major provisions to boost funding for bridges, drinking water infrastructure and more.

Pointing to other accomplishments

On a similar note, Select Committee on the Climate Crisis Chair Kathy Castor (D-Fla.) argued Democrats already have some climate accomplishments to show to voters. She noted that of the more than 700 recommendations her panel made in its 2020 Action Plan, 201 have already been passed into law.

“The NDAA is the most climate-forward, clean energy-focused defense bill,” she said, referring to the National Defense Authorization bill, which passed in December. “The American rescue plan had important climate provisions, and of the course the bipartisan infrastructure law did too,” she added. “‘BBB’ will really be the most impactful, but I would say if you look at the Republicans, they are totally disconnected from the reality of what families and businesses want on reducing pollution.”

Republicans, however, aren’t worrying about Democrats getting a leg up from their climate agenda.

To the extent voters care about what Democrats are doing on climate, it will be because of high energy price increases and the perception that leading lawmakers haven’t done enough to combat them, argued Rep. Garret Graves of Louisiana, the top Republican on the Climate Crisis committee.

“What you’ve seen under this administration is you’ve seen a fundamentally different approach to energy and climate that has resulted in, not the emissions reductions that we saw under the Trump administration, but actually an increase in emissions … and you’ve had increased prices,” Graves said.

The United States’ greenhouse gas emissions jumped 6.2 percent in 2021 from the previous year, according to an estimate by the Rhodium Group, but remained 5 percent below 2019 levels.