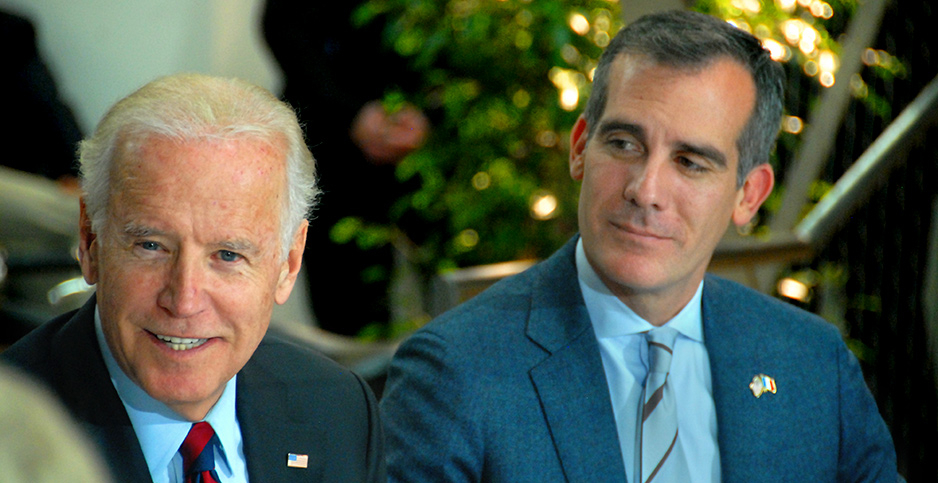 A year ago, Los Angeles Mayor Eric Garcetti unveiled his vision for a Green New Deal. He followed up in February with a laundry list of green directives — congestion pricing, fossil fuel divestment, aggressive decarbonization timelines — that echoed the most progressive plans in the presidential field.

Biden’s elevation of Garcetti suggests the presumptive Democratic presidential nominee increasingly sees the climate movement as an important constituency. And Garcetti’s rise could, in turn, empower climate hawks to have a greater hand in shaping Biden’s policies.

Although Garcetti does not come from the activist left — and some progressives suggest his record as a climate hawk might be overstated — he nevertheless represents one of the strongest voices for climate action in Biden’s inner circle.

The other three officials guiding Biden’s selection of vice president lack a pronounced profile on energy or the environment. They are Chris Dodd, the former Connecticut senator who became a lobbyist for Hollywood; Lisa Blunt Rochester, the at-large congresswoman from Biden’s home state of Delaware and a member of the Congressional Black Caucus; and Cynthia Hogan, Biden’s longtime counsel in the Senate and vice president’s office, who became a lobbyist for Apple Inc.

These four officials could be critical to U.S. climate ambitions. Biden’s would-be vice president is expected to shoulder significant responsibilities, just as Biden did on clean energy under President Obama.

They might also help select the next leader of the Democratic Party. Biden’s age — he would be 78 on Inauguration Day, the oldest president ever — raises the odds of him serving one term, potentially making his running mate the heir apparent in the next presidential race.

"Four to eight years from now, this candidate is going to be the front-runner for the nomination. So I think climate advocates want someone who understands the need for a national mobilization," said Jamal Raad, a former staffer to Washington Gov. Jay Inslee (D), who premised his presidential campaign on climate change and has advised Biden on the issue.

The four co-chairs of Biden’s search committee are significant themselves. In the past, officials who helped vet future vice presidents have gotten important jobs, including former Attorney General Eric Holder in the Obama administration and former Secretary of State Warren Christopher in the Clinton administration.

Climate has defined Garcetti’s relationship with Biden for years.

Garcetti made his endorsement in January, a low point for Biden as his campaign slouched toward heavy defeats in the first two primary contests. Nevertheless, Garcetti was planting a flag; in a statement announcing his endorsement, Garcetti mentioned climate in the second sentence. Biden made him a national co-chair of his campaign.

The two had held a climate change event together in 2015, as the Paris climate agreement was coming together. After Garcetti’s endorsement, Biden said he would tap the mayor to guide the United States’ reentry into the climate accord.

That’s a role Garcetti has courted. He co-founded Climate Mayors, the network of U.S. cities trying to uphold the Paris commitments, and last year, he was elected to chair the C40 Cities Climate Leadership Group, the group of cities trying to cut emissions at the local level.

At home, Garcetti has sometimes faced a tougher crowd.

"Congratulations to him," the Los Angeles Times editorial board wrote after Garcetti’s C40 election. "Now, let’s see some action on the ground in Los Angeles."

Transportation has been the most problematic sector for Garcetti, given his city’s world-famous sprawl. The mayor campaigned for Measure M, a 2016 ballot initiative that created a $120 billion sales tax for mass transit projects.

Three years later, Garcetti was taking credit for installing 2,100 electric vehicle chargers and crafting a comprehensive solar energy incentive program. He then heaped new goals on top of that, calling for the city to reach 80% renewable energy by 2036 and for every building to be zero-emissions by 2050.

"Politicians in Washington don’t have to look across the aisle in Congress to know what a Green New Deal is — they can look across the country, to Los Angeles," Garcetti said in 2019.

He followed that up in February by putting more aggressive timelines on his policies, along with plans to study congestion pricing and encouraging city pension boards to divest from fossil fuels.

But some advocates have been unimpressed at the slow progress of Garcetti’s transportation changes.

He’s been willing to spend money on transit, but the overall system remains basically unchanged since he took office, said Hayley Richardson, a spokeswoman for the advocacy group TransitCenter.

"There has not been a meaningful attempt to wrestle with car culture, which would require … actually making it harder to drive. And those are the things that elected [officials] tend to shy away from — but they’re the mark of leadership," she said.

For instance, Garcetti’s expansion of bus and bike lanes lags far behind Seattle, Richardson said. "LA is starting to get left behind," she said.

Others point to the progress Garcetti has made in expanding the realm of climate policy beyond narrow policies on electricity or tailpipe pollution.

Yusef Robb, Garcetti’s political adviser, said the mayor has been fighting for a global Green New Deal "at the same time that he advances the nation’s most ambitious local Green New Deal in Los Angeles."

Garcetti’s predecessor, Antonio Villaraigosa, had climate policies of his own, but they were more scattershot and one-off, said Jonathan Parfrey, who was a commissioner at the Los Angeles Department of Water and Power during Villaraigosa’s administration.

Garcetti, he said, has brought a more systematic approach. He hired a chief sustainability officer and has integrated climate policy into a broad array of community programs.

The mayor controls only one component of the sprawling transportation network that covers Los Angeles County, Parfrey said, so Garcetti doesn’t deserve blame for the entire system’s shortcomings — though he does have more sway over other stalled initiatives, like closing the natural gas plants on California’s coast or building resilience hubs that can support communities during crisis.

"Eric Garcetti is a committed climate advocate, period. And you’ve heard it from me — I don’t always agree with the guy. But on policy, he is excellent, and he is going to be pushing for climate action," said Parfrey, who is also founder and executive director of Climate Resolve, a nonprofit that focuses on local climate action.

Problems in Delaware like sea-level rise have given Blunt Rochester some experience on climate issues, and the Biden campaign has called her a leader on environmental justice. But she has stopped short of the most progressive stances.

She sits on the House Energy and Commerce Committee, where she has supported Democrats’ climate bills, and she has co-sponsored the "Environmental Justice for All Act" by Rep. Raúl Grijalva (D-Ariz.). She did not co-sponsor the Green New Deal, nor has she signed the No Fossil Fuel Money Pledge.

Her background as a health and labor official has led much of her committee work to focus on health care, though she also sits on the panel’s Environment and Climate Change Subcommittee.

She started as an intern for then-Rep. Tom Carper (D-Del.), and he later appointed her as deputy secretary of the state Department of Health and Social Services and then state secretary of labor.

Dodd represented Connecticut in the Senate for 30 years. He spent most of that time serving alongside Biden. Both ran for president in 2008, and to save expenses, they shared a campaign plane.

Dodd chaired the Senate Banking Committee, and he once made a bid to become the Senate’s Democratic leader. He seemed to show little interest in environmental policy until late in his career. The League of Conservation Voters gave him a lifetime score of 78%, though the green group disagreed with only two of his votes in his final term.

By 2008, Dodd was urging more aggressive climate action than Biden.

Dodd was the sole presidential candidate that cycle to call for a "corporate carbon tax" to fund clean energy research. He also proposed the strongest vehicle mileage standards in the field, 50 mpg by 2017, according to a 2007 article in Grist.

Dodd’s carbon goal came from a bill by Sens. Bernie Sanders (I-Vt.) and Barbara Boxer (D-Calif.), who is retired.

Dodd left the Senate in 2011 and became the chief lobbyist and chairman of the Motion Picture Association of America, the trade group of major Hollywood studios. He left that job in 2017.

As Biden’s counsel, Hogan has mostly remained out of the public eye. She was staff director at the Senate Judiciary Committee, which Biden chaired, and then followed him into the Obama administration.

At Apple, she has lobbied Congress and the Trump administration on student privacy laws and computer science education.