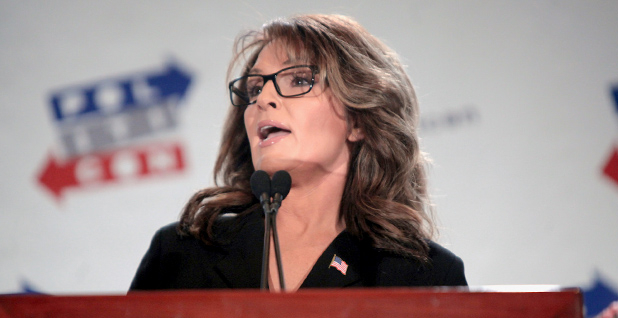 Former Alaska Gov. Sarah Palin is often mentioned as a possible nominee for a top resources or energy post in the Trump administration. Photo by Gage Skidmore, courtesy of Flickr.

Will U.S. EPA be led by a climate change skeptic? Could an oil tycoon soon lead the Energy Department? Might Sarah Palin become Interior secretary?

The rumor mill is churning as energy and environmental insiders speculate about who might be in line to get top jobs in the Trump administration. Unlike previous administrations, President-elect Donald Trump isn’t coming into office with a cadre of longtime political allies, making it tougher to predict his picks for prominent agency posts.

In the wake of recent big shakeups on Trump’s transition team — he recently replaced transition leader Gov. Chris Christie of New Jersey with Vice President-elect Mike Pence — questions abound over whether the operation has been set back in its schedule and is reconsidering decisions for personnel on the transition team and in the administration.

But Trump said today reports about discord in the transition — including a New York Times story saying the operation is in a "state of disarray" — are inaccurate. "The failing @nytimes story is so totally wrong on transition. It is going so smoothly," Trump wrote on Twitter.

Trump also wrote, "Very organized process taking place as I decide on Cabinet and many other positions. I am the only one who knows who the finalists are!"

Overall, Trump must fill about 4,000 political jobs within the federal bureaucracy. Some energy experts predict he’ll opt for a combination of former officials who are well-versed in government bureaucracy and outsiders from industry and other groups with an eye toward "draining the swamp," which Trump has pledged to do.

The Trump team aimed to strike such a balance when making its first two White House appointments by picking political insider Reince Priebus, chairman of the Republican National Committee, to be chief of staff and naming right-wing favorite Steve Bannon of Breitbart News the chief strategist.

A source close to the transition team said the operation plans to announce picks for the top Cabinet positions by the end of this month. After those key jobs are designated, the team will begin filling lower-level jobs, a process that will likely stretch well past Trump’s inauguration. Transition team members have been collecting names for top jobs, while suggestions are pouring in from lawmakers, advocacy groups and job seekers.

Here’s a look at the names that are circulating for key energy and environmental posts within the Trump administration:

It’s still unclear how the administration will organize top staff within the White House, but the president-elect is certain to have a team of close aides working to coordinate energy policy throughout the government. Among those top players will be the Council on Environmental Quality chairman, the leader of the Office of Management and Budget and the head of OMB’s regulatory review shop, the Office of Information and Regulatory Affairs. Trump may also opt to have an adviser dedicated to energy and environmental issues.

EPA is responsible for drafting and enforcing regulations to ensure clean air and water. The agency also has a huge role on the international stage, participating in climate change negotiations such as last year’s agreement reached in Paris. President-elect Trump, however, is no fan of the agency and is expected to tamp down on its regulatory authority once in office.

Assistant administrator for air and radiation

From reviving the long-stalled Yucca Mountain waste repository in Nevada to supporting nuclear and coal-fired generation and research, big shakeups are possible at the Energy Department. The agency head has a huge job — certain branches of the department oversee the nation’s nuclear weapons stockpiles, national labs and energy research — and the secretary must manage 13,500 employees and 104,000 contractors.

Republicans are eyeing a leadership change at the Federal Energy Regulatory Commission, a powerful but little-known agency that oversees the nation’s power grid, interstate natural gas pipelines and hydropower projects. Republicans will be able to fill three slots on the bipartisan commission. While FERC is not an environmental regulator, a new chairman could support fossil fuels when setting the agency’s agenda. Several names for new commissioners are already circulating.

Republicans could soon fill two openings on the Nuclear Regulatory Commission, which oversees the nation’s existing reactors and new license applications. Many sources said NRC Commissioner Kristine Svinicki, the sole Republican on the panel whose term ends in the summer of 2017, could be picked to lead the agency. In recent months, Republicans have focused on staffing at the agency as reactors close, a review of the Yucca Mountain waste repository could restart and the pace increases for the licensing of new reactor designs. Rumors are already flying about possible nominees.

The State Department’s Office of Global Change supports the top U.S. climate negotiator in leading international negotiations under the U.N. Framework Convention on Climate Change (UNFCCC) and other global bodies. A source on Trump’s transition team has said the administration is exploring steps to terminate U.S. membership in the UNFCC or rescind U.S. participation in the Paris deal.

Interior is a sprawling department with 10 agencies that handle public lands, natural resources and Native American issues. Its mission can be contradictory; while some offices focus on leasing land for drilling, others protect wilderness and wildlife. Trump has proposed expanding oil and gas development on public lands, and he is expected to turn to industry groups and George W. Bush-era officials to fill key positions within Interior, particularly those with roles in energy management, such as the Bureau of Land Management. For more conservation-focused agencies, such as the Fish and Wildlife Service, Trump could look to state agencies with conservative reputations.

Bureau of Safety and Environmental Enforcement

President-elect Trump has some big plans for the nation’s transportation system. Trump has promised to trigger $1 trillion in infrastructure investment with a bill proposed during his first 100 days that would give $137 billion in tax credits to private companies interested in building and managing highways and other types of infrastructure. Trump’s transition team has experience in infrastructure building. It’s being led by former Virginia DOT Secretary Shirley Ybarra, who used private-public partnerships in building toll roads. The team also includes Martin Whitmer, who served as DOT deputy chief of staff under George W. Bush and now lobbies on behalf of the American Road & Transportation Builders Association, among others.

The choice for an agriculture secretary comes down to whether to pick someone familiar with the U.S. Department of Agriculture or to pick an outsider who might shake up the agency. A possible clue is that the Trump transition team member in charge of USDA policy is a former USDA deputy chief of staff, Michael Torrey, who runs a Washington lobbying firm focusing on agriculture, risk management and financial services.

USDA sub-Cabinet positions or head of the U.S. Forest Service