Will EPA ‘repeal and replace’ climate regs, or just repeal? 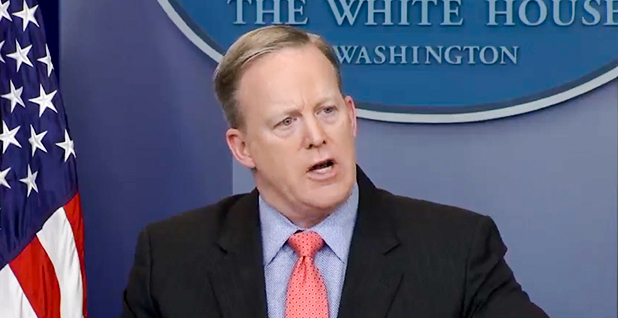 White House spokesman Sean Spicer yesterday said the Trump administration is reviewing all of its energy policies while sidestepping a question on whether the president still intends to roll back the Clean Power Plan. Photo courtesy of C-SPAN.

That comes as Republican sources point to an uncertain timeline about addressing the controversial Obama-era rule, which calls for cutting greenhouse gases 32 percent at power plants by 2030. Trump promised to rescind it on the campaign trail.

Spicer also sidestepped a question about whether the administration might target U.S. EPA’s endangerment finding, the legal foundation for most regulations aimed at cutting carbon dioxide. The agency used the finding to justify the Clean Power Plan.

"I think the president’s been very clear with respect to energy policy, that he wants to review all of the options that we have to use our natural resources to better the country in terms of wind power, solar, clean coal," he said. "We’re in the process of reviewing all of our energy policies."

Environmental advocates braced themselves at the time of Trump’s inauguration 12 days ago for sudden rollbacks to the climate policies established by President Obama. Trump has so far focused on other priorities like health care, immigration and trade.

"I think the timing is a matter of discussion based on when the nominee is confirmed. That’s my guess," Ebell said last week. "I think they’re trying to decide whether to do it before he’s confirmed, or wait until after he’s confirmed. And of course if the Democrats delay his confirmation, my guess is they won’t wait around."

The Senate Environment and Public Works Committee is set to vote on Pruitt today. The full Senate has not scheduled a roll call vote on his nomination.

Sources close to the transition say that the complicated process of undoing the Clean Power Plan could be better managed under the stewardship of Pruitt and his team at the agency. Questions around the long-term strategy of deconstructing the rule were not answered before the inauguration and probably can’t be until Pruitt is appointed, according to one source.

"The question for the Clean Power Plan is very similar to Obamacare. Do you repeal and replace, or just repeal?" the source said.

‘Some sort of efficiency standard’

The agency’s 2009 endangerment finding determined that carbon dioxide and five other greenhouse gases are harmful to human health. The finding was spurred by a Supreme Court ruling in Massachusetts v. EPA, which directed the agency to regulate those gases if they’re found to be dangerous.

That means EPA would have to grapple with satisfying its legal requirements to cut carbon dioxide at certain sources, like power plants. It’s unlikely those decisions can be made without an administrator in place.

All of those steps would likely be challenged in court by environmental groups. One line of thinking during the transition involved applying a basic energy efficiency standard to power plants, rather than the Clean Power Plan’s broader requirements around establishing emission trading programs.

That might satisfy EPA’s legal obligations to regulate carbon, the source said.

"So if [the courts] come back and order us to do a rule, then fine, we’ll say that power plants have to do some sort of efficiency standard and we’ll call it a day," the source said, describing one line of thinking.

David Doniger, director of the climate and clean air program at the Natural Resources Defense Council, suggested that such standards would be "too puny." Asked if basic efficiency standards would prompt legal challenges by NRDC, he said, "Of course."

"As long as the endangerment finding is intact, then the agency is under legal obligation to curb the emissions from these sources," Doniger said.

Spicer also used the question yesterday about the Clean Power Plan, asked by E&E News, to pounce on Democrats for delaying the confirmation of Trump’s Cabinet nominees.

"I’d go back to note that we don’t have an Energy secretary confirmed right now because the Senate hasn’t moved forward," he said.

The Clean Power Plan and the endangerment finding fall under EPA authority, not the Energy Department.