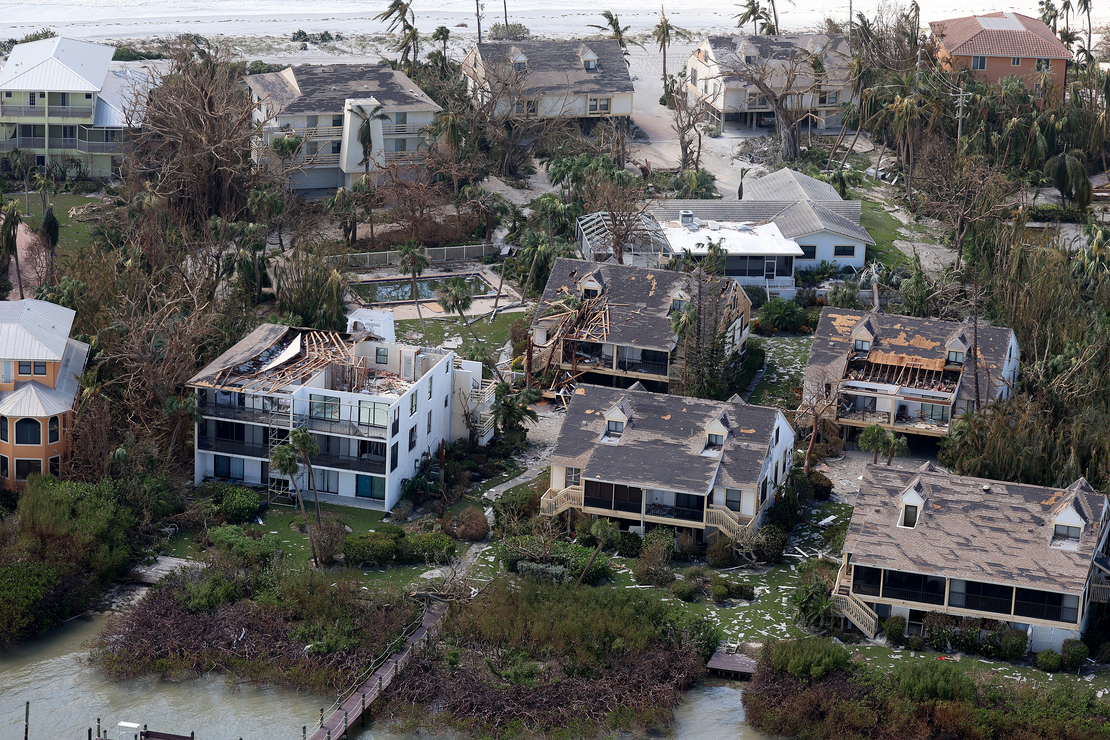 Homes show some damage after Hurricane Ian passed through the area on Sept. 29, 2022, in Sanibel, Fla. Joe Raedle/Getty Images

Housing markets hit by hurricanes tended to gentrify and attract wealthier buyers in the long term, according to a new study that analyzed trends in Florida over a 16-year period.

Researchers used data from NOAA, county tax assessments and real estate website Zillow to assess market conditions and population turnover in the Sunshine State from 2000 to 2016.

With the cost of homeowners insurance skyrocketing in Florida and now nearly three times as high as the national average, the trend could only exacerbate, one of the study’s co-authors said.

“Wealthier households are in general just better at self-insuring,” said Yanjun (Penny) Liao, a fellow with Resources for the Future, a nonprofit research institution in Washington, D.C. “After a disaster, it’s not like their financial wealth is going to be wiped out if they have to pay to rebuild their home.”

The study found that in the three years after a hurricane, more than a quarter of all homes were occupied by households with a higher income than before the storm struck.

Overall, home prices in hurricane-ravaged areas of the state were 5 percent higher on average than in other areas during the three-year period after a storm, according to the study set to be published in the March issue of the Journal of Environmental Economics and Management.

After three years, prices returned to pre-storm levels but did not drop below them, the study found.

The study also found that hurricanes did not fundamentally change the long-term demand for housing in areas that had been hit by the storms.

“One hypothesis for the gentrification phenomena is that wealthier households may move into communities at a higher rate following a storm because they have a greater ability to both absorb the temporary price increase and any insurance cost increases,” the study said.

Joshua Graff Zivin, a co-author of the study from the University of California, San Diego, said that could indicate “a market flaw, given the current state of the climate.”

“Policies may be needed to ensure that these communities have strong adaptation and mitigation measures in place to deal with future storms,” he said.

The issue has become increasingly worrisome in Florida, where residents now pay the highest premiums for homeowners insurance.

According to an analysis by the Insurance Information Institute, Florida homeowners faced an average cost of $4,231 for property insurance in 2022, compared to a national average of $1,544.

And just last month, state lawmakers passed a bill requiring hundreds of thousands of property owners in the state to buy flood insurance. The Florida Legislature approved the requirement, the first of its kind in the nation, after Hurricane Ian caused catastrophic damage last year in parts of the state where few people had any coverage (Climatewire, Dec. 15, 2022).

Liao said the authors of the study were particularly surprised that housing demand didn’t decrease in areas that had been hit by hurricanes.

“Hurricanes are projected to get stronger,” she said. “Our findings show that the idea that people will naturally retreat from hazardous areas may not necessarily hold up. In Florida, at least, it appears that market forces are not encouraging people to move to safer places.”

Benjamin Keys, a professor of real estate and finance at the University of Pennsylvania’s Wharton School who has also studied the effects of climate change on housing, said wealthier people may have an advantage in their ability to pay rising insurance costs but there’s no guarantee that property values in the state will rise in the long run.

“It’s an interesting thing that could go in either direction,” he said Tuesday. “If there’s an area that everyone agrees is going to be underwater in 25 years, then the value of that land should fall dramatically. You can imagine Florida having enclaves where there’s very low-income residents living in extremely flood-prone areas, and so I don’t think it’s necessarily one size fits all.”

Keys also warned that any price changes in a housing market can come slowly, unlike a stock that can reprice immediately in reaction to bad news, but he predicted a long-term trend may be that more retirees moving to Florida will decide to rent instead of buy to protect their retirement equity.

“Renting may become a more viable strategy in some of these riskier areas,” he said. “And you know, barring that, the mountains are also a nice place to retire to.”