Will it end in tears? Enron author examines fracking boom 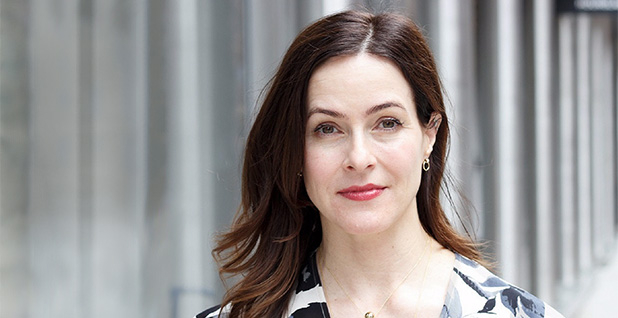 Halfway through her new book, Bethany McLean offers an epitaph for the late Aubrey McClendon, one of the pioneers of the fracking boom.

McClendon’s company, Chesapeake Energy Corp., had become the second-largest U.S. gas producer after Exxon Mobil Corp., but he was forced out as CEO after complaints about his lavish perks and the company’s debt load. He died in a car accident in 2016, a day after being indicted on bid-rigging charges, which were later dropped (Energywire, March 3, 2016).

"Is Chesapeake the model for this business? It changes the world but it ends in tears?" McLean quotes a hedge fund manager as asking.

It’s the kind of question McLean has built a career around. In 2001, she wrote an article for Forbes magazine asking how Enron Corp., the Houston-based energy trading giant, made its money. The article helped push Enron into bankruptcy, and produced a book and documentary, "The Smartest Guys in the Room: The Amazing Rise and Scandalous Fall of Enron."

Her latest book, "Saudi America: The Truth About Fracking and How It’s Changing the World," is an attempt to ask the same kind of pointed questions about the unconventional drilling boom that’s been going on since the mid-2000s.

The answer, McLean found, is complicated. The shale drilling industry has overturned assumptions about energy scarcity and given the United States an economic advantage that a lot of observers didn’t think was possible at the turn of the century.

But it was built on mountains of debt and survived the oil bust of 2015 and 2016 because of easy access to credit, whether it’s in the form of bank loans, bonds or investment from private equity companies.

As The Wall Street Journal and other publications have reported, the major fracking companies have rarely lived within their cash flow. The problem is that oil and gas production from shale wells often falls by more than half within in a year, so companies have to constantly drill to keep up their production. And they use borrowed money to do it.

That reliance on debt leaves the industry exposed if interest rates go up, or if something else happens to cut off the supply of money, McLean argues.

Since The New York Times published an excerpt from the book, critics have said McLean missed key points: Companies have become much more cost-conscious and can turn a profit at far lower prices than before the bust. And besides, fracking could be the key to the Trump administration’s goal of "energy dominance."

In a telephone interview, McLean told E&E News she came to think of shale drilling as "calculus rather than algebra" and said no one’s sure how the story will play out. But she added that it’s important not to overlook long-term trends, like the move away from fossil energy.

That’s not so much, to me, the key question as it is, how much oil and gas would we be producing if companies had to live within their cash flow?

If the capital markets stopped granting this incredible largesse to these companies, what would the shale revolution look like then?

As we beat our chests about American energy independence, the reliance on the capital markets is really worth thinking about. And that’s, to me, the key point of the book.

It’s a bigger-picture risk, you know, a risk to this thing we’re all now starting to take for granted.

What impact would it have if all of a sudden you couldn’t get easy credit in the oil patch?

I wish I had an answer, and I think my arrogance in setting out to write this book was believing that I could answer that question. What I learned in doing the book is that anybody who has ever forecasted anything about shale has been wrong — usually on the downside, right? They usually have missed the upside.

Anybody who has ever forecast about oil has been wrong. So I have a lot of humility about knowing what’s going to happen.

I came to think of shale as calculus rather than algebra — meaning that there’s so many factors that go into where this thing is headed from oil prices, which are set by factors no one can see coming around the globe, to technological improvements to geology itself.

To have an answer would be the height of arrogance.

My point is … there is much more risk to this thing from the financial side than most people think. And maybe that makes the book less satisfying than it could be because I don’t have a conclusion at the end of it.

The book echoes a lot of discussion among industry and analysts about where the industry is going. There’s been talk about a wave of consolidations. Is that a possibility if interest rates go up?

That’s what everybody thought would happen in the bust from 2015 to 2016. And it didn’t happen for the basic reason that credit was still available.

And so, as a result, you didn’t have the cleaning and the washout that people predicted would happen.

So maybe in the next downturn, maybe it happens, maybe there’s consolidation. But there’s this wave of easy capital, easy credit that has lasted longer than anybody would’ve believed.

Predicting when that’s going to end is another fool’s prediction, I think.

What happens if we get another oil boom, if the price bounces up about $80 or $90 per barrel, would all these debts get paid off?

You would think they would go away, but this industry didn’t make money even when oil prices were well over $100 a barrel.

I think about the cost of this broadly in two buckets. The tech improvements, yes, can drive the cost of drilling a well down and increase the amount of oil and gas you get out, at least in the short term, making this stuff more profitable on a near-term basis.

I quote some people who have looked at this saying that, you know, service costs are sort of the swing factor. People are going to say, "What happened to my $40-a-barrel break-even?" But as service costs start to escalate, that break-even number moves higher, too.

I’ve heard the service companies are sort of the Levi Strausses of the gold boom. They get rich during the boom selling shovels and supplies, and they know when and how to raise their prices.

Right, and they cut to the bone as oil prices fall in order to preserve what business they have, but then the prices rise really quickly.

If you can assemble land and prove out the resource through a smart team, then you can sell that land to another publicly traded company. And everybody gets paid because the publicly traded companies have been valued not on cash flow but on a multiple of the acreage they own … or production growth.

The whole thing has worked because of this kind of noneconomical way of valuing companies. And I don’t know if at some point that doesn’t end.

For companies that aren’t planning to buy and flip, do you see an endgame for those guys?

One smart criticism I got, at least with the op-ed, is that a well can be really profitable. You can earn a return on capital on that single well, although even that depends on where and how you drill.

The problem is in publicly traded vehicles, where companies have to keep production growing every year, and so the capital needs continue to mushroom every single year as you have to surpass the previous year’s production numbers.

I think there are privately held companies that are quite profitable. I think there’s also a difference in the vehicle used to hold these assets.

There’s been some concern that the majors aren’t living within cash flow over the last couple of years.

Another criticism I’ve gotten of the book, which is valid, is that the oil industry overall kind of sucks and that this issue of outspending cash flow has been true of the majors, as well.

That said, I think the important difference is that the majors have for stretches of time gotten religion and been able to deliver a return to shareholders.

Shale hasn’t even proven it can do that and that it can deliver a return even during a specific period. So I’d say shale looks one step worse than oil, overall.

The oil industry has always been a lot more willing to live with risks. Are we to some extent applying our own standards to the oil business?

To some extent, yes. I think the book, and I hope you agree, offers a pretty nuanced portrait of Aubrey McClendon. I’m obviously not negative about him. There’s some negative stuff, but there’s a quote in the book: "The world moves when people who like to take risk take action," and I think that’s true.

I’m all for the ingenuity and the risk-taking of the entrepreneurs in this business who really have changed the world. I just think their fate is not entirely theirs to control. Unless they are producing cash flow, their fate is in the hands of the financial markets, and I think that’s worth everybody understanding and being clear about.

To some extent, are the markets drawn to shale because there’s no other place they can get the kind of returns they get out of shale?

I think that’s a really smart point. Part of the reason pension funds, private equity funds have been putting money into shale is because in a very slow-growth world, where there isn’t much economic growth, shale at least is growing.

It’s been a growth spot in an otherwise fairly stagnant world.

Are the private equity firms and other investors coming into this with their eyes open?

I think they are, actually. I think there’s a lot of questioning among private equity firm … about how this plays out in the end.

Even more what I was really struck by and really surprised by were the smart private equity people I talked to who are no longer even investing in shale because they think the dawn of the age of renewables is that close.

People are actively spending tons of time trying to figure out when that might be.

I think that’s the other reason I’m kind of skeptical about this whole notion of beating our chest about American energy independence when the world is rapidly moving away from nonrenewables.

For us to be so proud of ourselves for having this oil and gas wealth and not to invest in renewables is sort of missing the way the world is going to be.