Will methane reductions continue under Trump? 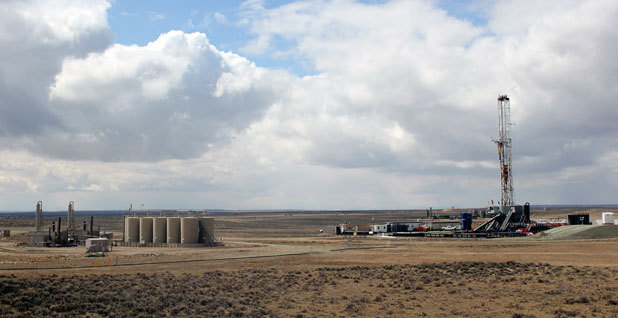 Methane emissions fell in the Obama years, but whether the decline will continue under President Trump is a matter of fierce debate.

Trump has directed federal agencies to reconsider a series of Obama-era regulations designed to limit methane emissions from oil and gas operations, the largest industrial emitter. Environmentalists have decried the move, saying the measures are sorely needed to curtail a greenhouse gas that is 25 times stronger than carbon dioxide at trapping heat in the atmosphere. Oil and gas companies have welcomed the change, arguing that it validates their view that industry-led efforts have already reduced methane levels.

While the methane battle is often overlooked next to the debate over carbon dioxide emissions from coal facilities, its outcome will go a long way toward shaping U.S. climate policy in the coming years. Methane accounted for roughly 10 percent of U.S. greenhouse gas emissions in 2015, according to the greenhouse gas inventory report finalized by U.S. EPA last week. Between 2005 and 2015, emissions from methane dropped 4 percent (see related story).

"It’s important from a climate and environmental point of view and important from national energy security point of view," said Mark Brownstein, vice president in the Climate and Energy Program at Environmental Defense Fund. "Every year, this industry wastes between 8 to 10 million metric tons of methane. That’s enough energy to serve the needs of every household in a state the size of Ohio or Pennsylvania. There are real consequences to allowing this problem to fester."

It remains unclear if the Trump administration and congressional Republicans will be able to overturn two measures that underpinned Obama’s methane efforts. Oil and gas firms are already complying with a 2016 EPA rule designed to cut emissions from new and modified wells, though the regulation remains tied up in court. Earlier this month, the Trump administration asked the U.S. Court of Appeals for the District of Columbia Circuit to pause ongoing litigation while EPA reviews the rule (E&E News PM, April 7).

And producers will soon need to start buying equipment to comply with the Bureau of Land Management’s Methane and Waste Prevention Rule if Republicans cannot soon garner 51 votes in the Senate to overturn the regulation through the Congressional Review Act.

Industry advocates said they were hoping to force a vote on the BLM rule when Congress returns from recess. Interior is also in the midst of a 21-day review to determine whether the rule is fully consistent with the new administration’s priorities.

"If you suddenly require tens of thousands of existing wells that are marginally economic to put in additional controls, those marginally economic wells will have to be shut in," said Kathleen Sgamma, president of the Western Energy Alliance, an oil and gas trade group. "We can see a situation where it’s putting federal lands at even more of a disadvantage. Given the predominance of federal lands in the West, it disproportionately hurts Western producers."

Much of the debate stems from a disagreement over whether regulations are needed to cut methane emissions (see related story).

The new EPA data show that natural gas-sector emissions declined by 16 percent between 1990 and 2015, thanks largely to technological advancements. The oil industry has seen its emissions fall by 28 percent over that period.

"As an industry, we continue to innovate and add new technology to improve our performance," he said.

Environmentalists argue that regulations have played a vital role in reducing methane emissions. Much of the decrease in the industry’s emissions has been driven by a 2012 EPA rule requiring producers to install pollution controls during hydraulic fracturing jobs. Natural gas emissions from well completions fell by almost 60 percent between 2011 and 2015, EPA’s greenhouse gas inventory shows.

In 2015, the World Resources Institute released a white paper showing that U.S. methane would increase by 6 percent without further regulations on methane emissions.

"Even if emissions are reduced, it’s clear they’re not being reduced quickly enough," said David Lyon, an EDF scientist. "It is critical to have these regulations to minimize the climate impacts."

Just a few months ago, oil and gas producers were facing a federal regulatory landscape dotted with restrictions dictating how much wasted natural gas could be released or burned from oil and gas wells on public and private land across the country.

In November, BLM finalized its methane waste rule. Five years in the making, the rule calls on producers operating on public and tribal lands to incrementally reduce the amount of natural gas flared from wells by capturing more of it over time.

Similar to its predecessor, the new rule prohibits the release, or venting, of gas except in emergencies or for testing. The new rule calls on operators to survey their wells for gas leaks and fix them, which the industry calls leak detection and repair.

"The rule tried to draw bright lines," said Alexandra Teitz, who previously served as counselor to former BLM Director Neil Kornze. The agency argued that updated rules created certainty and would in some cases reduce the burden of compliance for oil and gas operators.

The rules also encourage the use of leak detection technology and require that leaks be fixed when found.

For some companies, the debate will have little impact on their operations. Jonah Energy LLC, a large natural gas producer in western Wyoming’s prolific Pinedale Anticline, invested substantially in technology to detect and repair leaks after a 2011 spike in ozone levels exceeded federal health standards.

"Whether or not those rules are in place, it doesn’t impact our commitment to be environmental stewards or the commitment to our programs," said Paul Ulrich, Jonah Energy’s director of government affairs. "The program works well for us."

Ulrich nevertheless welcomed Trump’s call to review the EPA and BLM rules, saying, "We may see something that allows much more input from the states, industry and the communities impacted. Industry has plenty of tools in the toolbox. But once you give us a hammer to do a screwdriver’s job, it stifles innovation."

Indeed, Jonah Energy is something of an outlier among oil and gas producers. More common is the view of Anschutz Exploration, which says the BLM rule has stifled development of an emerging oil play in eastern Wyoming’s Powder River Basin.

"We need some regulations that take into account standard business practices that help expand into areas that aren’t proven commercial at this time," Anschutz President DeDominic said.

Repealing or amending the regulations will become more difficult if Congress does not vote to kill the BLM rule and EPA’s standards are upheld in court.

An industry loss in either venue would likely prompt a new round of rulemaking, where EPA and BLM would need to show why the science and rationale behind the initial rules are no longer sound, legal observers said.

But whether the agencies’ initial decisions were based on sound science remains contentious. The BLM rule is a case in point.

Joel Minor, an associate attorney with the environmental group Earthjustice, called the evidence provided by BLM "robust" and said, "I believe it would be challenging for the agency to justify a decision to completely rescind the rule or to make other changes that allow substantial waste of our publicly owned resources to continue."

Sgamma disagreed. The Western Energy Association president said the regulation is another example of government overreach, based on faulty science and shoddy economic analysis.

"It’s not taking into account that industry has already reduced emissions," she said.