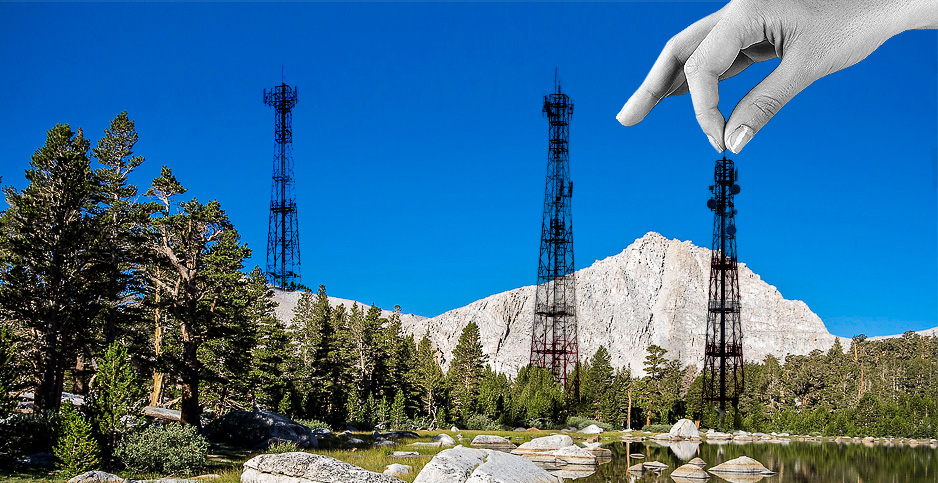 At Mount Rainier National Park in Washington state, park officials plan to hide their new cellular equipment in an attic.

At Sequoia National Park in California, a new 138-foot cell tower will be out in the open, but park officials want to disguise it to look like a huge pine tree.

And at Grand Teton National Park in Wyoming, in perhaps the biggest digital expansion of all, park officials ignited a controversy with their plan to install new towers at nine sites, along with 62 miles of high-speed fiber-optic cable, near the park’s main roads.

With no nationwide policy to guide them, officials at the National Park Service’s 419 sites are finding all sorts of ways to increase their digital connections, hoping to lure more younger visitors. Supporters say it boosts safety and interest in visiting parks.

But critics say it’s a big mistake and actually ensures that children will feel more disconnected from nature in the long run.

"People should have a right to a no-Wi-Fi zone — there should be places where we’re not in contact and reachable," said Richard Louv, a California author of "Last Child in the Woods: Saving Our Children from Nature-Deficit Disorder."

Louv acknowledged that he appears to be on the losing end of the argument with park officials, but he said people should be taught "that connecting to other life is more important than collecting your email."

"The big problem is the lack of focus on nature as media, that nature itself is a network, a connection that is every bit as important — and I believe more important — than our electronic connections," he said.

The feud has long pitted those who seek solitude in parks and wild places against those who have grown accustomed to the convenience of being plugged in wherever they go.

Many park officials are eager to get their sites wired or upgraded, saying it will make it easier to respond to emergencies and save on costs.

Tracy Swartout, the acting superintendent at Mount Rainier, said the park could have limited cellphone service in place by this fall. She said allowing a frantic parent to get in touch with a missing child who has an iPhone in his pocket but can’t use it would "alleviate that situation for the longest 20 minutes of that parent’s life."

"There’s a huge value to it," she said. "We might deploy 20 searchers out looking for a 10-year-old who is quite literally just out of sight. … Our big thing is search-and-rescue — we have fatalities every single year in this park, and I’m hoping that we can have a positive impact on search-and-rescue and emergency services."

‘No picture is worth hurting yourself’

The digital debate has intensified as demand for connectivity grows, and parks confront new challenges from visitors who use their smartphones to take photographs in dangerous or protected places.

In California, officials at Joshua Tree and Death Valley national parks and other sites this spring had to contend with people who trampled wildflowers — the "super blooms" — to get selfies for their Instagram, Facebook and other social media accounts.

In Arizona, thousands of visitors from around the world are flocking each day to Horseshoe Bend Overlook in search of the perfect selfie, prompting new congestion and safety concerns for park officials.

At Yosemite National Park in California, an 18-year-old Israeli man died last September after plunging nearly 600 feet into the rocks from the top of Nevada Fall while trying to get a daredevil photo, according to the San Jose Mercury News. And in October, a young couple of travel bloggers known for their scenic shots fell from Taft Point while taking a photo and died (Greenwire, Oct. 31, 2018).

Other parks have reported similar tragedies, including Grand Canyon National Park, where a tourist from Hong Kong died in March after falling from 1,000 feet over the edge of a rim while trying to take a selfie, Reuters reported.

While NPS does not track deaths by "selficide," a study in the Journal of Family Medicine and Primary Care found that 259 people around the world were killed while taking selfies from 2011 to 2017, prompting some to describe it as a "selfie epidemic."

The study concluded that "no selfie zones" should be declared across popular tourist areas, especially near high peaks, but NPS has no such plans.

"Park visitors share in responsibility for an injury-free experience and can reduce their risk of injury with proper planning and preparation," said Kathy Kupper, a spokeswoman for the Park Service. "The taking of a selfie itself is not the cause of a fatality. Countless selfies are taken every day in national parks without any negative consequences."

In some ways, the growing popularity of selfies has actually benefited the Park Service, giving it widespread free advertising on the internet. Park officials say they’re also making increased use of selfies to investigate cases when people post photos of themselves engaged in illegal acts.

Kupper said that only a very small percentage of park visitors "put themselves into precarious situations" and that the Park Service focuses on educating visitors about potential hazards, including offering tips for avoiding falls.

Yellowstone National Park, which has six cell towers, gives visitors a chance to take the "Yellowstone Pledge," which includes 10 ways people can keep themselves safe and help protect the park.

One of the tips urges tourists to "practice safe selfies."

"No picture is worth hurting yourself, others, or the park," it reads. "Be aware of your surroundings whether near wildlife, thermal areas, roads, or steep cliffs."

Currently, at least 26 national parks have existing commercial telecom towers, including some that have more than one, Kupper said.

Altogether, she said, the parks have 55 commercial towers, and another 27 have been proposed.

At Death Valley, officials are considering a plan to put a new 60-foot wireless tower on Rogers Peak, which has a summit of 9,980 feet. Most of the park currently lacks cellphone reception.

The proposal to add the new towers at Grand Teton has come under particularly sharp attack, with opponents calling it a "mega-expansion" that would go too far in disturbing the natural landscape.

"Grand Teton is a poster child for how park planning should not be done," said Tim Whitehouse, executive director of Public Employees for Environmental Responsibility.

Whitehouse said the proposal also "does not bode well" for David Vela, President Trump’s choice to lead the Park Service. Vela helped finalize the plan when he served as Grand Teton’s superintendent and is now NPS acting deputy director in Washington.

Grand Teton officials defend their plan, saying their current equipment and services are inadequate and need to be updated. Construction could begin this fall.

"Our plan is a holistic and comprehensive approach to meet the park’s telecommunications needs for the future while protecting the park’s resources and responding to visitor expectations," said Grand Teton spokeswoman Denise Germann.

Some parks have found ways to minimize the addition of new poles and wires as they improve their services and preserve their vistas.

Ramkumar Krishnan, chief technology officer at Arizona-based NantEnergy, said the company teamed up with Duke Energy Corp. on a project that allowed for the removal of 3.5 miles of power lines at Great Smoky Mountains National Park. He said the company can use zinc-air batteries and solar generation for backup power systems at remote locations, replacing lead-acid batteries and diesel generators while saving money and lowering emissions at the same time.

"Can we eliminate all the towers? No, but we can make them less obtrusive," said Sarah Singleton, the company’s chief marketing officer. "You have to have backup power anyway — you might as well make sure it’s environmentally friendly backup power."

At Sequoia National Park, officials say construction on their new tower near Wuksachi Village could begin in 2020. They opted for a "monopine" design, hoping the new tower will resemble a pine tree and blend in with other trees. It will be the first installation of its kind inside Sequoia, where cellular coverage is very limited.

Swartout said Mount Rainier wanted to preserve the park’s "extraordinary scenery" by putting new limited-range cellular equipment in the attic of the Jackson Memorial Visitor Center in Paradise, the most heavily used part of the park.

"Towers would be something that we would really want to try to minimize, if not outright avoid," she said.

Park officials say they’re required by the Telecommunications Act of 1996 to consider all applications from companies that want to install cellular equipment on park lands.

Parks work with companies on design and construction plans, which must be approved by an NPS regional director.

At Mount Rainier, a board of review examined the lack of cellphone reception after complaints from some agencies that their employees could not communicate with each other when they responded to the 2012 killing of park ranger Margaret Anderson, who was shot by a visitor.

"Independent of what occurred with Margaret’s murder, this is something that we were going to evaluate anyway," Swartout said.

She said that the park "can be a dangerous place" and that many visitors are not prepared for what they may experience: "If you fall down and break your leg and you’re by yourself and have a device in your pocket, you may not be able to text and get emergency support, and that could put your life in danger. So this provides a bit of a safety net for them."

As national parks move quickly on their plans, Louv, the chairman emeritus of the Children and Nature Network, said children could suffer by coming to regard nature as "more of an abstraction," relying too much on their iPhones and technology and losing out on the more powerful lessons of nature.

"Go on a hike in the wilderness," he said. "There is something there that you cannot get anywhere else, and you certainly can’t get it on the internet."