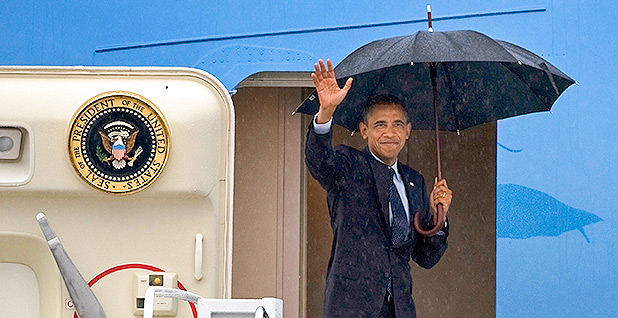 President Obama is leaving office next week — but how much of his agenda will stay intact? Photo by Airman 1st Class Daniel Hughes, courtesy of the Department of Defense.

Just a few months ago, President Obama’s environmental legacy seemed bulletproof. His team had put the final touches on keystone policies, and a friendly successor appeared poised to keep his environmental work chugging along.

Trump made promises on the campaign trail to torpedo the Obama administration’s signature energy and environmental rules, pledging to upend an international climate deal along with major air and water rules from U.S. EPA.

Now, rather than taking a victory lap as Obama did last night (see related story), environmental officials and green groups are clinging to the hope that some of the work done over the last eight years can survive Trump’s wrecking ball. Meanwhile, Trump and his supporters in industry are eager to start chipping away at the energy policies they have long assailed as grievous examples of government overreach.

Obama’s allies and critics alike insist that his administration will have a lasting environmental impact, even if it’s not what the outgoing president had hoped for.

"I think a majority of President Obama’s legacy in the environmental and energy area will stick," said David Hayes, who served as deputy Interior secretary under Obama. "There tends to be an overstatement or a tendency to assume that new administrations can wipe the slate clean or that they even want to. They can’t, and in many cases they don’t want to."

Among the factors that could work in Obama’s favor are the time-consuming bureaucratic process, a potential backlash from the public if Trump is perceived as going too far and complex environmental statutes designed to force the hands of federal agencies when setting air and water policies. And some policies that have been on the books for years have already had big impacts.

"Some of the things that they have done have already kind of done their damage and they’re baked into the system," said Jeff Holmstead, an energy industry lobbyist at Bracewell LLP and a former George W. Bush administration EPA official. Holmstead cited an Obama rule to cut mercury emissions from coal-fired power plants as an example, noting that coal-fired units shut down rather than comply with that regulation.

"The truth is that most of what the Environmental Protection Agency does is carefully cabined in by the environmental legislation that it’s charged to administer," Fulton said.

Obama’s early efforts to tackle fuel economy standards and limit greenhouse gases from automobiles are credited with already taking a big bite out of emissions. Trump’s team will be charged with finalizing the next round of fuel efficiency standards.

League of Conservation Voters President Gene Karpinski said yesterday in a statement that Obama has "cemented his legacy as the greenest president we’ve ever had. His administration has taken historic strides to make our planet cleaner and healthier for our children and grandchildren by combating climate change, protecting our public lands, implementing stronger protections for our air and water, and so much more."

Still, Obama’s critics are bullish about what the incoming Trump administration can do.

The president spent eight years "trying to make climate change one of his staple legacy issues, and I think it’ll be very short-lived," said Nick Loris, an energy and environmental policy fellow at the Heritage Foundation.

Among the big-ticket policies that Trump’s team appears poised to revoke are EPA’s Clean Power Plan to cut power plants’ greenhouse gas emissions, the Clean Water Rule to clarify which waters are subject to Clean Water Act protections and U.S. participation in the international climate treaty inked in Paris.

Trump’s team is also expected to halt Obama’s moratorium on coal mining leases for federal lands and could attempt to roll back some of Obama’s national monument designations.

"It remains to be seen whether his Antiquities Act designations will be undone by Trump," said Loris, who added that he thinks the new administration will take a shot at unraveling them.

Environmentalists contend that the Trump administration will be unable to resolve designations under the Antiquities Act, but congressional Republicans are pushing the incoming administration to test that authority (Greenwire, Jan. 6).

In the absence of significant energy and climate legislation during Obama’s tenure — despite efforts to push a massive climate bill during his first term — many of Obama’s key policies were implemented through executive actions. That makes them easier for Trump to tackle.

"By choosing to circumvent Congress, [Obama] really put a lot of his big signature initiatives at risk," Holmstead said.

"He kind of rolled the dice and lost."