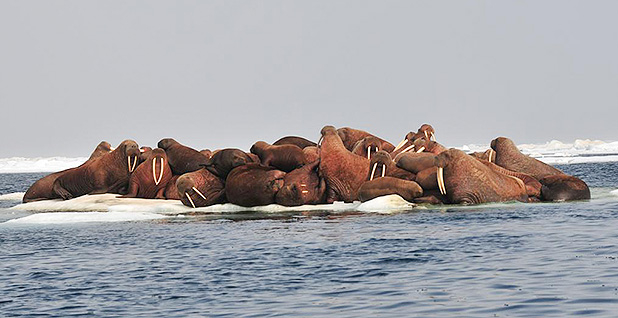 Walruses in the Chukchi Sea. President Obama yesterday designated the Chukchi Sea and most of the Beaufort Sea indefinitely off-limits for future oil and gas leasing, declaring that the move would "provide critical protection for the unique and vibrant Arctic ecosystem which is home to marine mammals and other important ecological resources and marine species." Photo courtesy of the U.S. Geological Survey.

Republicans and industry groups yesterday pilloried President Obama’s decision to permanently ban drilling in the U.S. Arctic and parts of the Atlantic Ocean and said they are counting on the incoming Trump administration to undo the move.

All three GOP members of Alaska’s congressional delegation called the sweeping ban dangerous to both their state and the country’s economy.

"The only thing more shocking than this reckless, short-sighted, last-minute gift to the extreme environmental agenda is that President Obama had the nerve to claim he is doing Alaska a favor," Sen. Lisa Murkowski said in a statement. "I cannot wait to work with the next administration to reverse this decision."

Rep. Don Young in a press release called it a "cowardly move by a lame duck President," adding, "This decision only strengthens our resolve — as a resources oriented state — to overturn the heavy hand of government and empower our people and communities with new social and economic opportunities. The groundwork is already being laid to overturn this terrible decision."

Obama withdrew 125 million acres — the entire Chukchi Sea and a "significant portion" of the Beaufort Sea, as well as 31 underwater canyons in the Atlantic Ocean — "for a time period without specific expiration." To do so, he used an authority granted under the 1953 Outer Continental Shelf Lands Act (OCSLA), the law that governs offshore leasing of the outer continental shelf (E&E News PM, Dec. 20).

But if Trump wants to undo Obama’s actions, legal experts said, he might have a difficult road ahead.

While it’s true that executive actions are easily overturned, the authority Obama used to place the ocean ecosystems in the Arctic and Atlantic under protection is written into legislation and thus granted by Congress.

Under OCSLA, Section 12(a) expressly gives the president the power to "from time to time, withdraw from disposition any of the unleased lands of the outer Continental Shelf."

The Constitution stipulates that Congress has the authority to regulate public lands, and presidents can only control them to the extent Congress delegates that power to them, said Niel Lawrence, Alaska director and a senior attorney with the Natural Resources Defense Council. In the case of Section 12(a), the law specifically gives the president the authority to withdraw lands and that is it.

"Congress only gave presidents the power to do this, but not to undo it," he said. "No president has ever tried to undo this."

Presidents dating as far back as Eisenhower have used Section 12(a), although typically to remove areas from leasing for a few years at a time. President George H.W. Bush used it to ban offshore drilling across most of the outer continental shelf. Bush placed areas off the coast of California, Oregon, Washington, the North Atlantic and parts of the eastern Gulf of Mexico under that ban. President Clinton extended that moratorium to place marine sanctuaries under permanent protection.

White House officials yesterday expressed confidence that under the law, there is no mechanism for reversing the withdrawals. Decades of precedent, including two uses of Section 12(a) by Obama, strengthen their case, they said.

In December 2014, Obama withdrew Bristol Bay in Alaska from future attempts to develop oil and gas resources. In January 2015, he placed areas of the Chukchi and Beaufort seas in the Alaskan Arctic planning areas under protection from future oil and gas leasing.

"We believe there is a strong legal basis and that these withdrawals and all other withdrawals will stand the test of time," a senior administration official said on a call with reporters.

The American Petroleum Institute’s upstream director, Erik Milito, said in a statement that it’s not that cut-and-dried. In 2008, President George W. Bush overturned previously withdrawn areas to open up the outer continental shelf for leasing, with the exception of marine sanctuaries. Milito said Bush used "a simple memorandum" to overturn those withdrawals.

"Congress did not intend for the president to be able to exploit a rarely used, 24-word provision to make entire seas off-limits from energy production," said Karen Harbert, president and CEO of the U.S. Chamber of Commerce’s Institute for 21st Century Energy. "We hope the Trump administration will repeal this action and will work to consider all options to undo this unlawful action."

Deborah Sivas, a professor of environmental law at Stanford University, said that if Trump attempts to repeal the withdrawals, this issue will "unquestionably be litigated in the courts."

"If you were Alaska or a state that wanted to see the actions overturned, the best way to do it would be to convince the new administration to rescind it and prompt legal conflict that way," she said.

Sivas said that if Alaska, or a state affected by new bans, were to challenge the administration in court over whether it has the authority to lock up a potential source of economic benefits derived from oil and gas development, that could be a stronger challenge than going after Section 12(a) authority but could result in the courts overturning the permanent withdrawals.

Administration officials noted that they were not taking action alone in the Arctic, which could strengthen their case. In tandem with the United States, Canada announced that it will freeze oil and gas leasing in its Arctic waters for at least the next five years.

Murkowski called that deal "incredibly lopsided," noting that Canada has the leeway to review its status every five years. "With Russian development already underway in the Arctic, it may be just a few short years before our nation is bracketed by activity on both sides and importing the oil resulting from it," she said.

The White House argued that 0.001 percent of federal offshore oil production comes from the Arctic, and current oil prices make development untenable for most oil companies. By contrast, they said, an oil spill would cause significant harm to the ecosystem, given the remoteness of the region, and would affect numerous endangered species as well as subsistence hunting relied upon by Native communities.

Environmental groups were elated by the move, which they say will protect the two biodiverse, yet fragile ecosystems and aid in the climate change fight.

"These special places should remain off limits to offshore fossil fuel development, and we’re grateful to President Obama for taking this bold step," said Fred Krupp, president of the Environmental Defense Fund, in a statement.

Marissa Knodel, a campaigner with Friends of the Earth, called the announcement a "major victory for our oceans and climate" and vowed that the group would take action if Trump broke with tradition and fought the new bans.

"If Donald Trump tries to reverse President Obama’s withdrawals, he will find himself in court," she said.