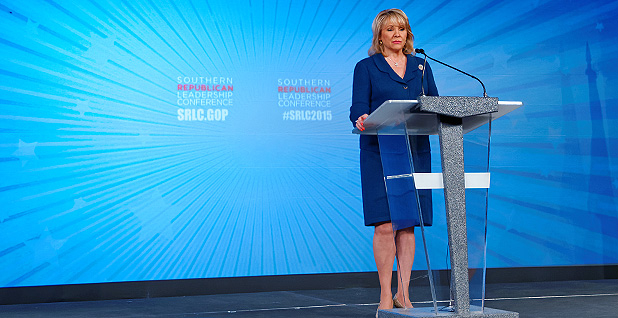 Oklahoma Gov. Mary Fallin (R) has been mentioned as a potential pick for Interior secretary. Photo courtesy of Wikipedia.

It’s an unwritten rule of federal politics that the person who runs the Interior Department must hail from the American West.

But now Oklahoma Gov. Mary Fallin (R) is said to be a leading contender for Interior secretary in the Cabinet of President-elect Donald Trump, which raises the question — is Oklahoma a Western state, and does it matter?

Oklahoma has wide-open spaces, cattle and cowboys. But it lacks Rocky Mountain peaks or a Pacific shoreline. Only its thin western Panhandle lies west of the 100th meridian, the traditional boundary between the arid West and the humid East.

And perhaps most importantly, it is not a public lands state.

A tiny fraction of its lands — less than 2 percent — belong to the federal government. The five major federal lands agencies own more than a third of Colorado and nearly 85 percent of Nevada. Even Vermont has more (7.5 percent) than the Sooner State. In the West, most of that federal land is managed by Interior.

You have to go back to the 1970s to find an Interior secretary who was not from one of those public lands states.

"It would be a break," said Patty Limerick, a historian of the American West at the University of Colorado. A pick from Oklahoma, she said, could be seen as "challenging" the traditional selection criteria.

What Oklahoma does have in common with traditional Western states, in addition to a strong Native American presence, is oil.

Oil and gas is the dominant industry in the state, and 1 of every 5 jobs is said to be connected to it. The state Capitol is surrounded by working oil wells. Inside, the names of Halliburton Co., Phillips Petroleum Co. and Conoco Inc. are engraved in the dome.

Oil and gas executives are the corporate titans of the state and have provided much of Fallin’s campaign cash. Among industries, oil and gas was the biggest contributor to her 2014 re-election campaign. According to FollowTheMoney.org, she received $808,896 from oil and gas, topping health professionals, who gave $740,597. But the industry affiliation of many donors was unspecified. Data at OpenSecrets.org show that oil and gas was also her top financial supporter during her two terms in Congress.

Fallin endorsed Trump in early May, shortly after his path to the nomination cleared. She was even mentioned as a potential vice presidential pick. She was in tune with her state, which gave Trump more than 65 percent of the vote. She met with Trump for 40 minutes last week (Greenwire, Nov. 23).

The incoming president has financial interests in oil and gas. Trump’s oil and gas holdings include Exxon Mobil Corp., Halliburton and TransCanada Corp. They are held in brokerage and wealth management accounts, according to the financial disclosure report he filed in May. His holdings had included Dakota Access pipeline builder Energy Transfer Partners LP, but Trump spokeswoman Hope Hicks told the Dallas Business Journal that he had sold his stake in the company in July.

But managing public lands and offshore areas gives Interior some of the broadest responsibilities for production. Despite rapid increases in production on private lands, federal oil and gas leases still account for one-fifth of U.S. domestic production. But that’s down from more than 35 percent before the nation’s oil drilling boom. Bonus bids, rents and royalties are often the second-highest source of federal revenue after income taxes.

Yet the rangelands of the West occupy a pre-eminent place in the department, going back to its founding. It was created in the 1840s as the nation wrestled with how to absorb a host of new territories in the West.

"Interior has a greater and more consequential presence in the West" than elsewhere, said Limerick.

The importance of where the secretary hails from is embedded in the culture of the department. Unlike other agencies, its list of former leaders includes the states from which they came.

None has come from Oklahoma.

Historians and academics have long labored over what exactly constitutes "the West," said Limerick. Oklahoma and Texas, she said, are among the most confounding questions.

"The definition of ‘Western’ has been up in the air for quite some time," she said.

Larry Swanson, a regional economist and director of the O’Connor Center for the Rocky Mountain West at the University of Montana, said he groups Oklahoma with Arkansas and Texas as the "Southern Gulf."

Still, Oklahoma has similarities with its neighbors to the west, Limerick said, starting with tribal issues. Once called "Indian Territory," the state has 38 federally recognized tribes. Interior includes the Bureau of Indian Affairs. Issues of the trust relationships with tribes and sovereignty have tripped up several Interior secretaries.

What is clear is that Oklahoma is not one of the 12 states with more than 10 million acres managed by the five major federal lands agencies, an attribute unique to states west of the 100th meridian.

Managing those millions of acres is a balancing act between preservation and development. To find the right balance, some say, it helps to have lived there.

Coming in with a purely pro-development view of public lands won’t work as well as it once did in many parts of the West, said the University of Montana’s Swanson. Nor would a purely preservationist view. He says Westerners demand a more nuanced approach to development.