Will planes fly in a hotter world? 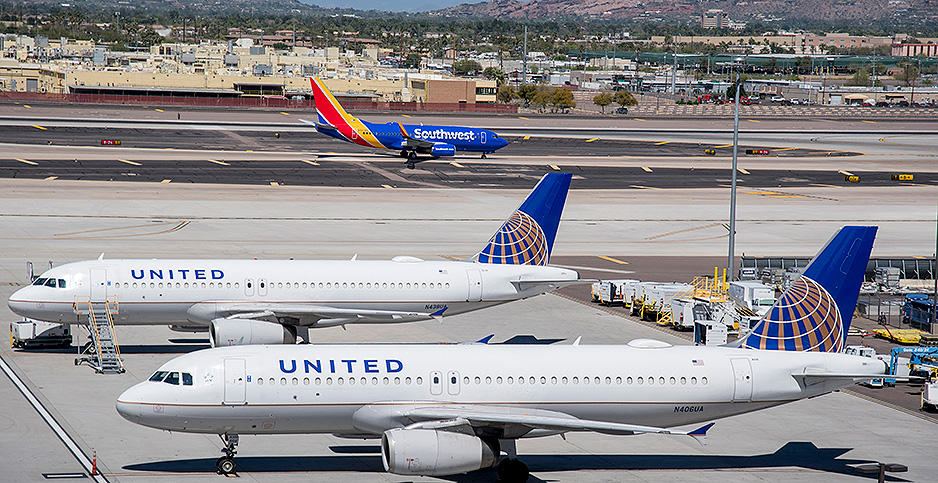 Extreme heat caused dozens of flights to be grounded at Arizona's Phoenix Sky Harbor International Airport in the summer of 2017. Experts say the problem could become more common — and costly — as the planet warms in the coming decades. Rick D'Elia/Zuma Press/Newscom

As the current heat wave sweeps across the U.S., Phoenix Sky Harbor is not expecting any disruptions, said Krishna Patel, a public information officer in the city of Phoenix’s Aviation Department.

"Sky Harbor is well prepared for Arizona summers. Sky Harbor’s runways are able to accommodate planes taking off in hot weather," Patel said in an email.

"The true hot weather impacts — like ‘Oh, my gosh, this is happening often’ — is probably 30 to 40 years out," said Pagliarello of Airports Council International.

There’s a scientific explanation for why planes have trouble taking off in searing temperatures: Hot air molecules spread out, lowering the density of air.

"When the temperature goes up, the air gets less dense. And as an airplane wing is moving through that less dense air, it’s not able to generate as much lift," explained Ethan Coffel, a postdoctoral fellow at Dartmouth College who specializes in extreme heat.

Extreme heat can also cause turbulence and lead to ruined runways. In the summer of 2018, temperatures of 96.8 F reportedly caused slabs of a concrete runway to buckle and crack at Germany’s Hannover Airport, prompting the suspension of flights during a busy travel period.

"You’re going to definitely have to sit next to a stranger again, I’m afraid, on a plane," Hayes said.

‘Keeping the lights on’

"This [heat] increase obviously cannot go on forever without airports having to take some kind of mitigating action, such as constructing longer runways," Paul Williams, an atmospheric scientist at England’s University of Reading and a co-author of the study, wrote in an email to E&E News.

In some cases, constructing longer runways isn’t physically possible. It’s also an expensive proposition. Concrete runways cost on average $4,400 to $7,200 per meter (3.28 feet) to build, while asphalt runways cost around $3,900 per meter.

U.S. carriers improved their fuel efficiency by 40% between 2000 and 2019, and they’ve pledged to reach an international target of slashing emissions in half by 2050, she said.