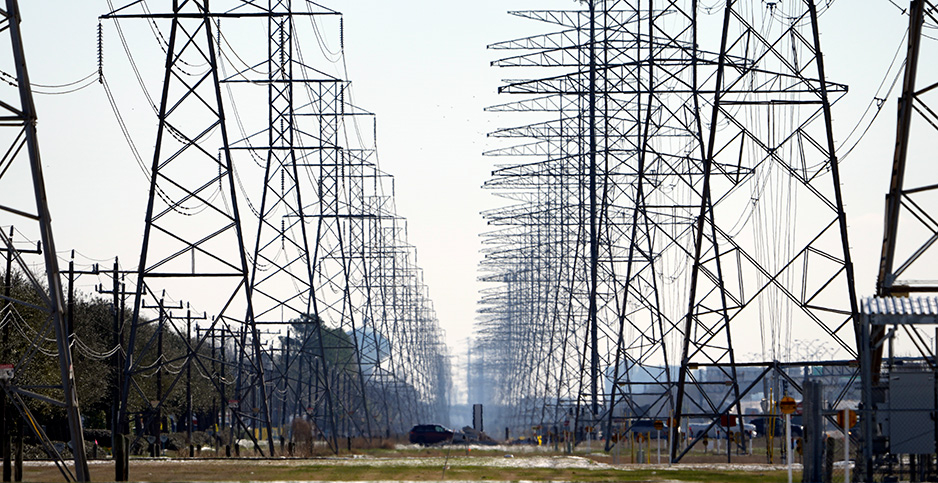 Transmission lines in Houston. The Texas grid carries some of the most carbon-intensive energy in the nation. AP Photo/David J. Phillip

Texas’ electric grid buzzes with contradiction. It is simultaneously the dirtiest power system in the country and the leading generator of renewable power.

The dueling superlatives reflect changes sweeping across the Texas prairie. The use of coal has been cut in half over the last decade, to 18% of generation, while wind surged to provide about a quarter of the state’s power.

But despite that, the Texas grid carries the highest-emissions electricity in the nation.

The question now is whether political fallout from the power crisis last week will slow the state’s momentum toward a greener grid.

Yet the debacle is likely to influence the debate over how to green power supplies in Texas and beyond for years to come. Many analysts expect renewable projects to continue at a brisk clip. The Electric Reliability Council of Texas, the state’s primary grid operator, anticipates that 12 gigawatts of solar capacity will be added in the next two years, or more than double the 6 gigawatts already installed.

But power companies may be loathe to shutter coal plants that are scheduled for closure in light of the trouble experienced by natural gas facilities during the cold snap. Frozen wellheads and competing demand for heating needs saw gas generation, the backbone of the Texas grid, plummet by 36% on the first day of the crisis.

That echoes an argument once made by the Trump administration, which proposed subsidizing struggling coal and nuclear plants in the name of making the power system resilient. The plan was ultimately shot down by the Federal Energy Regulatory Commission.

"If coal plants are going to continue to shut down, they need to make sure there is some sort of reserve gas supply that can step up in these sort of winter events," said Wade Schauer, a lead analyst at the consulting firm Wood Mackenzie.

Some observers predicted Texas may adopt the capacity markets common in other parts of the country, where power plant owners seek contracts to supply reserve power. A new market could be designed to ensure reserve power is available in winter months, they said.

There is debate among experts about whether such a market would address the challenges in Texas. Ultimately, the state will need to ensure that its plants can withstand extreme heat and cold, through a new market design or other reforms, they said.

If those regulations are written in a way that favor coal plants, it could greatly slow U.S. climate efforts. Falling coal consumption has been the primary form of emissions reductions across the country, and Texas has been a major contributor to that trend. The state has long held the rank as America’s largest consumer of coal in raw tons, though that figure has fallen in recent years.

Wind has been a key player in coal’s decline, with output almost doubling between 2015 and 2019. The 167 million megawatt-hours produced by Texas wind farms in 2019 outpaced California’s total renewable production of 84 million MWh.

Continuing coal’s strong presence might not help Texas during future cold snaps, some observers said. Coal generation fell 40% over the first two days of the Texas crisis last week. The fuel has struggled in other cold weather events, most notably the polar vortex that hit the Northeast in 2014.

"The issue is not that we don’t have enough capacity, it’s that it’s not there when you need it," said Michael Craig, a professor who studies energy systems at the University of Michigan. For the amount of money it takes to maintain coal plants most of the year, other options could be investigated to keep the grid stable and deliver cleaner power, he said.

That is particularly important at a time when a warming climate promises more numerous threats to electricity infrastructure. "It is only going to get harder from here," Craig said.

Renewables have their own challenges, though not necessarily the ones voiced by their Republican critics.

In its most recent winter reliability assessment, ERCOT anticipated wind would generate about 6.5 gigawatts of electricity in an extreme weather event, a tiny fraction of the 67 GW of available power. Texas demand ultimately surged to 75 GW during the outage, while wind generation underperformed expectations for the first three days of the crisis.

More challenging than iced wind turbines — a Republican talking point — was a lack of wind when it was needed. Neighboring grids to the north also witnessed a drop in wind output during the cold snap, even though many turbines there are equipped with technology that enables them to operate in temperatures as low as minus 22 degrees Fahrenheit.

Finding clean power supplies to meet winter electricity peaks is going to be a challenge going forward. Weatherization of homes and buildings will not only save consumers’ money in normal times, but relieve stress on the grid during an emergency, said Mark Dyson, who leads electricity research at the Rocky Mountain Institute, a clean energy research group.

Neither of those options on their own will solve the challenges faced by Texas, but they could mitigate the pain that people felt, Dyson said. Combined with a weatherized gas system that increasingly operates as backup during extreme weather events, such measures could provide significant emissions reductions.

"You can no longer take a top-down-only view to grid resilience," Dyson said. "There is an important opportunity to take a complimentary bottom-up approach."

Others expressed hope that new technologies are on the horizon.

Rich Powell, who leads ClearPath, a conservative clean energy group, noted a Minnesota-based power cooperative is planning to install a long duration battery in the coming years. Plans for advanced nuclear reactors are also moving forward after years of talk.

Yet perhaps the biggest takeaway from the Texas crisis is a shift among consumers, who saw the vulnerability of their power system. Many people in the U.S. have become accustomed to cheap energy supplies.

"That changed this week," Powell said. "Going forward, how much are we willing to pay for a more resilient energy supply?"