Will the Supreme Court take on EPA’s climate rule? 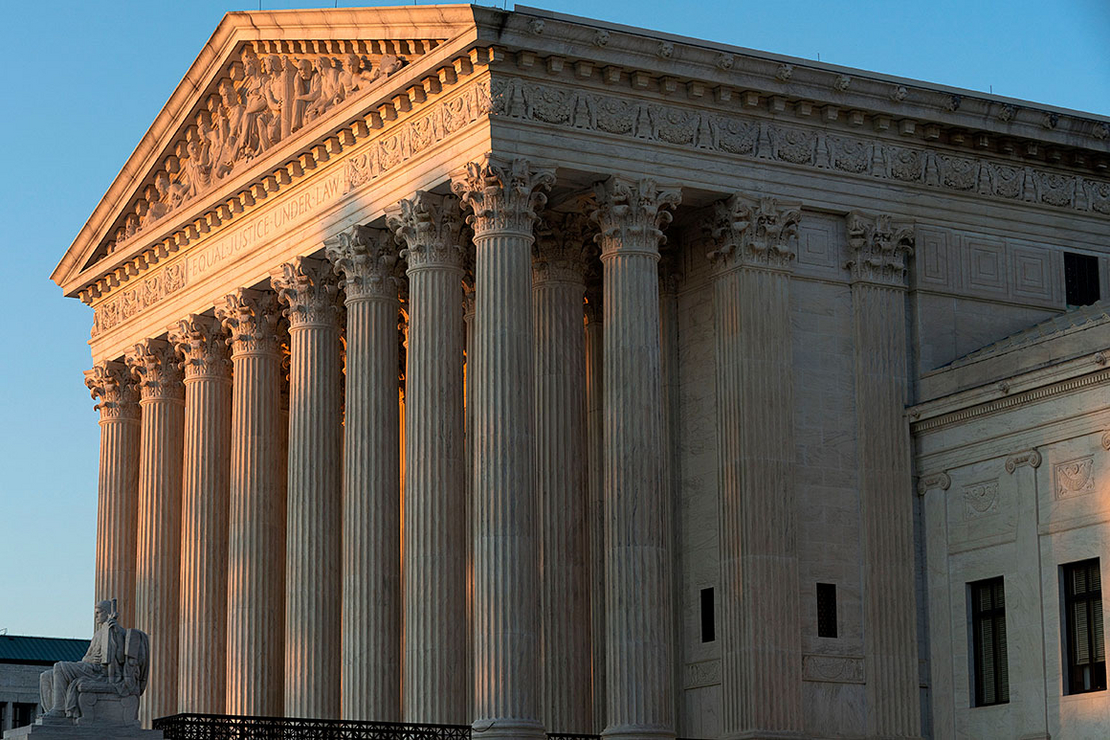 Foes of an Obama-era EPA clean energy rule are urging the Supreme Court to take up a case that could stymie President Biden's push for tighter environmental regulations on greenhouse gas emissions. The Supreme Court is pictured on Aug. 2. AP Photo/Jose Luis Magana

The states and coal companies have filed four petitions asking the Supreme Court to overturn a January decision by the U.S. Court of Appeals for the District of Columbia Circuit that scrapped the Affordable Clean Energy (ACE) rule, the Trump administration’s greenhouse gas regulation for power plants.

Together, the petitions offer an early test of the willingness of the Supreme Court’s six conservative justices to step in to block President Biden’s environmental agenda, said Robert Percival, director of the Environmental Law Program at the University of Maryland’s law school.

"This case involves a laundry list of the favorite topics of conservatives on cutting back on environmental regulation," Percival said.

Opponents of the 2015 Clean Power Plan, which former President Trump’s ACE rule aimed to dismantle, have argued that the Obama-era approach violated what is known as the major questions doctrine, which states that a federal agency needs a specific directive from Congress to craft regulations with "vast political and economic significance."

Some of the pending Supreme Court petitions argue that the regulatory structure infringes on states’ rights, while others are also questioning whether EPA can regulate greenhouse gas emissions at all.

The Supreme Court only grants about 1% of the petitions for writ of certioriari — or cert petitions — it receives. It takes the votes of four justices to accept a case.

Three members of the court’s conservative wing — Justices Neil Gorsuch, Clarence Thomas and Samuel Alito — could vote to take the case to send a message to Biden’s EPA, Percival said.

That means the red states and coal companies will have to convince Chief Justice John Roberts or one of the court’s newest members — Justices Brett Kavanaugh and Amy Coney Barrett — to serve as the fourth vote in favor of taking the case.

Roberts doesn’t seem likely to be swayed, since his operating principle on the court has been "don’t rock the boat," Percival said.

"So the question is would Kavanaugh or Barrett provide the fourth vote for cert here," he said. "And the way they’ve behaved, they probably wouldn’t."

Jeff Holmstead, a partner at the law and lobbying firm Bracewell LLP and the former leader of EPA’s air office during the George W. Bush administration, agreed with Percival’s assessment.

"When the agency that promulgated the ACE rule no longer wants to defend it, it would be highly unusual for the court to take that case," he said.

Of the justices, Kavanaugh is perhaps the most intimately familiar with EPA’s power plant regulation, having served as a D.C. Circuit judge when the Clean Power Plan came before the court in September 2016.

At the time, observers had expected the D.C. Circuit to rule in favor of the Obama rule, with Kavanaugh among those likely to dissent, Percival said.

But the court never issued an opinion on the rule. Before the D.C. Circuit reached its decision on the Clean Power Plan, Trump took office and asked the court to put the proceedings on ice while EPA wrote a much narrower carbon rule. The Supreme Court had already put the Clean Power Plan on hold pending the outcome of the D.C. Circuit case, so the Obama rule never took effect.

In August 2018, the Trump administration proposed the ACE rule, which took a much more limited view of EPA’s authority to regulate greenhouse gas emissions from coal-fired power plants. The rule was finalized in 2019.

The Trump team asserted that under Section 111 of the Clean Air Act, which directs EPA to consider the "best system of emission reduction," the agency could only consider changes at individual power plants — an approach known as "inside the fence line."

But the D.C. Circuit tossed out the ACE rule on the final day of the Trump administration, leaving the Biden team a clean slate to craft a new regulation (Greenwire, Jan. 19).

She said she thinks the red states and coal company that are currently petitioning the Supreme Court are misconstruing the D.C. Circuit decision on the ACE rule to be far broader than it actually was, perhaps in the hope of piquing the justices’ interest.

"There’s not a big imperative for the court to act at this moment. And so what you see in these petitions is a lot of effort to try to create that imperative," Vizcarra said. "It’s a parade of horribles they’re trying to portray."

She added: "In their attempt to create this environment of urgency, they’re maybe taking a step too far in how they’re describing the underlying decision below and misconstruing the holding in a way that I don’t know will be helpful to their case in urging the justices to take it up."

In its Supreme Court petition, North American Coal argued that the D.C. Circuit got it wrong when it opened the door to a more expansive regulatory approach.

"The EPA’s authority is nearly unlimited: It can impose a carbon tax, a cap-and-trade regime, or any other systemic policy it wants — any of these could qualify as the ‘best system’ as defined by the D.C. Circuit," the company wrote.

North American Coal also invoked the "major questions" doctrine, which holds that courts should not defer to agency interpretations of statutes that concern questions of "vast economic or political significance."

In particular, the company argued that courts should not defer to EPA’s interpretation of its climate authority under the Clean Air Act, when Congress never explicitly authorized such powers.

"[W]hat must be resolved as soon as possible is who has the authority to decide those issues on an industry-wide scale — Congress or the EPA," the company wrote.

It later added: "This Court should grant the petition for certiorari and return this ‘major question’ to Congress, where it belongs."

Jonathan Adler, a law professor at Case Western Reserve University, said he thinks the "major questions" claims could resonate with some of the conservative justices, who have shown an interest in limiting when courts show deference to agencies.

"The idea is that Congress doesn’t hide elephants in mouseholes," Adler said. "When Congress means to give the agency a lot of authority, Congress says so. You don’t have to guess about that."

The argument has already gained some traction with conservative judges in the D.C. Circuit. In his dissenting opinion earlier this year in the ACE case, D.C. Circuit Judge Justin Walker argued that EPA’s Clean Power Plan would have a major impact on the electric utility industry, said Percival.

Therefore, Walker argued, the court should not allow EPA to finalize such a far-reaching regulation unless Congress specifically required it.

In the Supreme Court petition led by Morrisey, the West Virginia attorney general, the red states urged the justices to clarify EPA’s climate authority now — not when the Biden administration’s EPA issues a new carbon rule for power plants in several years.

"This is the Court’s first opportunity to decide these issues on the merits, and there is no guarantee when the next will arise if the Court sits this round out," the red states wrote.

"Depending on timing, the anticipated third rule in as many administrations might evade review just like the first," they continued. "It may thus be 2025 (or later) before the Court could next provide much-needed clarity."

Power-sector interests and environmental groups seeking to uphold the D.C. Circuit ruling dismissed concerns over EPA overstepping its regulatory role, saying the regulation did not rise to the level of an "extraordinary case."

The major questions doctrine does not apply in this case because Congress had already been clear about EPA’s authority to implement a statute to regulate greenhouse gas emissions from power plants, representatives from the power sector countered in filings with the Supreme Court last week.

"[T]he only question is how it answers a particular question assigned to it by Congress: What is the ‘best system of emission reduction’ for a given source?" the groups wrote.

A coalition of environmental and public health groups also said arguments over the major questions doctrine are premature, since the Biden administration has not yet drafted a replacement rule.

"A case involving an agency’s repeal of a regulatory ‘relic’ that will never be implemented is an unsuitable vehicle for elaborating upon general administrative law doctrines that turn upon regulations’ real-world consequences," the groups wrote.

Some legal experts say the Supreme Court’s decision to preemptively block implementation of the Clean Power Plan in 2016 is a potential sign that the justices have a special interest in the issue.

Adler said the red states and coal companies may be signaling to the justices that they should also block implementation of any future effort by the Biden administration to regulate carbon emissions from power plants.

"I think the briefs are understandable in part as an effort by the petitioners to say to the court, ‘When the EPA does issue regulations again, it’s going to be really important that you stay those regulations,’" Adler said.

But the petitioners will also have to contend with Supreme Court precedent under Massachusetts v. EPA, a 2007 decision establishing the agency’s obligation to regulate greenhouse gases. Justice Stephen Breyer is the only member of the majority in that case who still sits on the court. But Roberts, one of the four justices in the dissent, has since come around to accepting the ruling.

In addition, the state of the power sector today is significantly different than when the Supreme Court blocked the Clean Power Plan in 2016. The industry has already achieved the emissions reductions targets in the Obama rule a decade early, renewable energy has become more affordable, and building new coal-fired power plants now makes little practical sense, experts say.

The biggest hurdle for those seeking to overturn the D.C. Circuit’s ACE ruling will be convincing the court that the Biden administration’s climate policy poses an imminent threat, Percival added.

"If this case is taken," he said, "it will be the blockbuster case of the year."