Will Trump back Bill Gates’ dream of a renaissance? 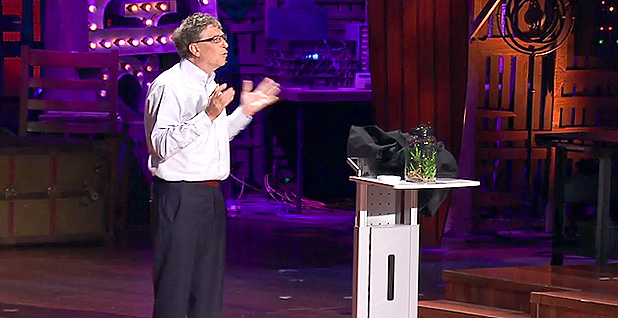 "Innovation really stopped in this industry quite some time ago," Gates noted, "so the idea that there’s some good ideas laying around is not all that surprising."

The lecture marked the birth of Gates’ new company, TerraPower, located in Bellevue, Wash., and a nuclear research program that led last summer to the award of a $40 million, multiyear Department of Energy research grant to help the company develop a molten chloride fast reactor (MCFR).

"For example," explained Chris Levesque, the current president of TerraPower, "coal could be converted in a very clean way" to synthetic fuels that don’t emit CO2.

This may sound too good to be true to some people, but MCFR’s attributes have attracted the attention of some influential research partners and a variety of competitors in the United States and especially abroad.

Will China be the ‘first mover’ on commercial reactors?

As Levesque described the benefits in a recent interview, MCFR is being designed to be simple enough to meet the world’s growing demands for clean energy, including one-sixth of the world’s population in developing countries that have little or no access to electricity. Its nuclear fuel, a slurry of depleted uranium and molten salt, will derive energy by using fuel from the nation’s mounting stockpiles of nuclear waste, reducing them by breaking them up into less harmful elements.

It may be years before the design for the reactor is ready to be certified by the Nuclear Regulatory Commission, but Levesque said preliminary discussions will begin with the regulators this year, and TerraPower’s partners include some of the nation’s pioneers of reactor designs and commercial use.

They begin with the Department of Energy and Southern Co., where Tom Fanning, president and CEO of the giant Atlanta-based utility, predicted after DOE’s award that "this collaborative research effort will help accelerate the development of next-generation nuclear reactors."

"We have a new administration … concerned about U.S. jobs, plus a huge international competition for the advanced reactor," said Sowder, who said that China, which is pursuing a gas-cooled advanced nuclear reactor, will likely be "the first mover" on a commercial basis.

The question, as Sowder sees it, is: "What role does the U.S. want to play? If we don’t want to step up now, someone else is going to eat our lunch in this area."

One of EPRI’s goals is to help drive down the cost of building and operating new reactors and have them employ fewer people. "The competitor is natural gas. There are currently a lot of costs associated with nuclear that other technologies don’t have," Sowder said, noting that safety issues are among them. To be competitive, he asserted, the United States must be able to demonstrate both safety improvements and cost reductions. "Otherwise, it’s not worth pursuing," he said.

Charles Forsberg, a nuclear power scientist at the Massachusetts Institute of Technology, said that while President Trump has focused most of his energy rhetoric on reviving the nation’s coal industry, a revival is not likely to happen. That’s because new natural gas-fired plants are more efficient and can work in tandem better with fast-growing solar and wind energy sources.

"Trump may slow the domestic coal market’s decline," but it will be very hard to reverse it, he said. Forsberg, who is designing his own version of an advanced reactor, said he thinks that opportunities for nuclear power in the international markets and concerns by U.S. utilities that natural gas prices will eventually rise will create more robust markets around the world for new nuclear plants.

Proponents of new reactors, particularly those like TerraPower’s, have claimed that they could cut overall costs by as much as 80 percent and supply much cheaper energy. That’s because normal reactors use only about 5 percent of the energy in their fuel, while advanced reactors can reach 95 percent, leaving substantially less radioactive waste behind in the process. The current world fleet of nuclear reactors produces 386 gigawatts of electricity, but proponents predict that the demands of the future market could be as high as 1,600 GW by midcentury, creating major new markets for skilled jobs.

Levesque, the president of TerraPower, maintains that his company’s reactor design has eliminated proliferation risks by keeping the plutonium sealed in the reactor, where the heat and lethal radiation will keep it safe and producing energy for the lifetime of the power plant.

"The rules and risks for this class of reactors are not established yet," said Kenneth Luongo, a former non-proliferation expert for DOE during the Clinton administration. He said he expects Russia and China to heavily subsidize their reactors in the international market. "Some of these reactors look like breeder reactors, and we’ve said there should be no producing of plutonium for use by other reactors," said Luongo, who is leading an effort to assemble a panel of experts to see whether there can be some kind of international consensus.

Ed Lyman, a physicist and senior scientist at the Union of Concerned Scientists, remains unimpressed. "There’s a plutonium glut around the world, particularly in the United States, so no one needs to breed plutonium," he said. "Reactor vendors have changed their marketing strategy to say they can actually burn up wastes. Of course, that’s not really true, either. I’m working on a report that will spell all of this out in detail, but it’s very misleading."

Climate change is spurring growing interest from previously anti-nuclear environmental groups in advanced reactors and in keeping older nuclear reactors running, as well, Cohen asserted. The Paris pact requires carbon-free energy to stop CO2 growth by midcentury. "Zero means zero," he said, "and we don’t have many decades to do that."