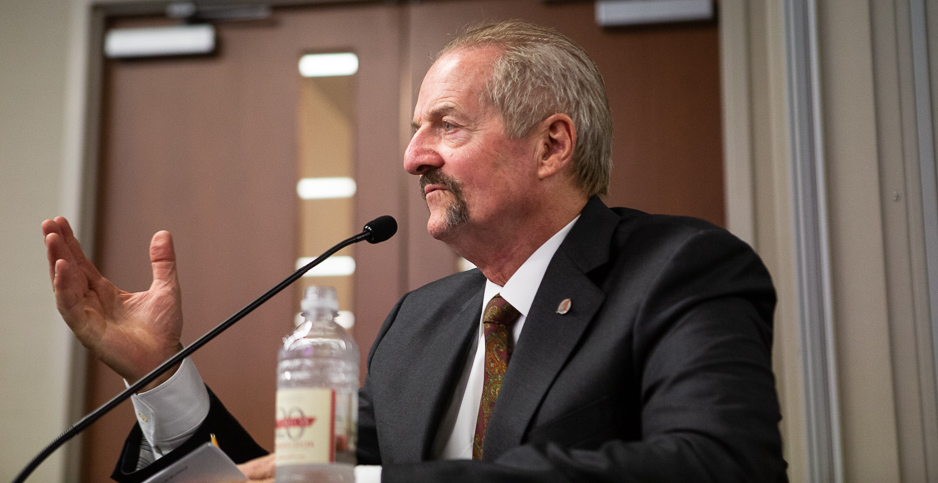 Lost amid the ongoing public debate over the merits of the Bureau of Land Management’s planned relocation out West is the looming expiration of William Perry Pendley’s stint as acting BLM chief.

Interior Secretary David Bernhardt made Pendley the acting director in July, and on Sept. 30 signed a secretarial order extending his term through Jan. 3 (Greenwire, Sept. 30).

What happens next could have a major impact on BLM’s relocation plan and create further political conflict between the Trump administration and congressional Democrats.

The most likely scenario is that Bernhardt will issue a new order next week extending Pendley’s title as "exercising authority of the director" for another 90 days. Pendley also holds the title of BLM’s deputy director of policy and programs.

But sources have told E&E News the very strong possibility remains that President Trump could formally nominate Pendley to the Senate-confirmed position.

One source said rumors are swirling that such a nomination could come during the congressional recess over Christmas and New Year’s. Bernhardt would then issue an amended order extending Pendley’s term as acting director pending the Senate confirmation process.

That would be consistent with what Interior Department and BLM sources have been telling E&E News since September (Greenwire, Oct. 1).

Those sources said that the White House is exploring nominating Pendley for BLM director, and that Pendley had undergone a formal background check in anticipation of a nomination. It’s not clear what the results were of any vetting process, or whether any decision has been made for or against a nomination.

For its part, BLM is not saying much.

"Nothing to announce at this time," a BLM spokeswoman said in an emailed statement to E&E News. "Will keep in touch."

But Pendley has stated publicly that he would welcome the chance to win Senate confirmation if nominated by Trump (Greenwire, Nov. 11).

The conservative lawyer and avowed "sagebrush rebel" has plenty of critics in Congress and in the conservation community, who say his past views and actions make him unfit to manage the 245 million acres of federal lands and 700 million acres of valuable subsurface mineral estate BLM oversees.

They often cite a 2016 opinion article in National Review authored by Pendley. In the article, Pendley decried federal landownership and argued that the U.S. Constitution all but requires the federal government to sell the lands it owns in the West.

But since he started working at BLM last summer, Pendley has stated publicly numerous times that he does not support transferring federal lands to states. He has also said his past views are "irrelevant" to his current duties, since neither Trump nor Bernhardt supports giving away or selling federal lands.

"Pendley should not be anywhere near the BLM, and should absolutely not be considered for the permanent position for BLM director," said Phil Hanceford, conservation director for the Wilderness Society.

Trump has yet to nominate anyone in three years for BLM director, and the bureau has cycled through a series of acting chiefs.

The last permanent BLM director was Neil Kornze, who held the post for the last three years of the Obama administration.

Still, the Senate confirmation process for Pendley would be brutal.

And it would come in a presidential election year, with the Interior Department already taking heated criticism from Congress over the plan to relocate BLM’s headquarters to Grand Junction, Colo., and move more than 200 other positions to state offices across the West.

Congress in December rejected Trump’s request for additional funding for the relocation, instead allocating $5.9 million for fiscal 2020 — the same amount it received in fiscal 2019 (E&E Daily, Dec. 17).

And appropriators, in report language accompanying the funding bill, chided BLM, saying it "has not fulfilled its obligation to fully communicate the organizational and financial details of the reorganization and relocation of the Bureau’s Washington, D.C. headquarters." Lawmakers directed BLM to "begin monthly briefings" with the appropriations panels "on the status of the reorganization."

In an op-ed published today in Wyoming’s Casper Star-Tribune, Pendley slammed congressional critics of the headquarters relocation, arguing it should be a "no-brainer."

"However, I keep remembering the way my former boss, President Reagan, characterized Washington, D.C., as ‘a small plot of lands on the banks of the Potomac surrounded on all sides by reality,’" wrote Pendley, who served as a top official under then-Interior Secretary James Watt in the early 1980s (Greenwire, Aug. 30).

He continued: "Consistent with Reagan’s warning, there has been much hyperventilating about our plans."

Pendley slammed news outlets covering the move for "giv[ing] the vapors" to "Capitol Hill and the vast federal bureaucracy."

"Even when a news story is fair and balanced, the accompanying ‘Sky is falling’ headline is meant to provoke angst and too often does," Pendley wrote.

He also questioned lawmakers’ commitment to oversight of BLM but added that "Congress need only ask and we will appear."

Regardless, New Mexico Sen. Martin Heinrich (D), who is adamantly opposed to Pendley leading BLM even on a temporary basis, told E&E News last fall that a formal nomination would be the right thing to do given the controversy surrounding Pendley.

"That’s the appropriate move," Heinrich said, "because then we can have that conversation in public with him, with the American people."

"We’re in the fourth year of this administration and there still has not been a permanent director nominated and submitted to the Senate for confirmation," said Shepard, a 38-year BLM official who retired in 2012.

"As the BLM goes through an unnecessary reorganization, they need a confirmed director to provide consistent leadership instead of a series of interim directors," he added.

Hanceford agrees, even though he says Pendley is the absolute wrong choice.

"That Pendley can remain in this acting status, it just goes to show that this administration doesn’t respect transparency and the rule of law," he said.

He added: "The BLM director should be approved by the Senate [first] in order to carry out his or her duties to manage our public lands. That just has not happened. And it’s going under the radar. The administration has bypassed this very important step."