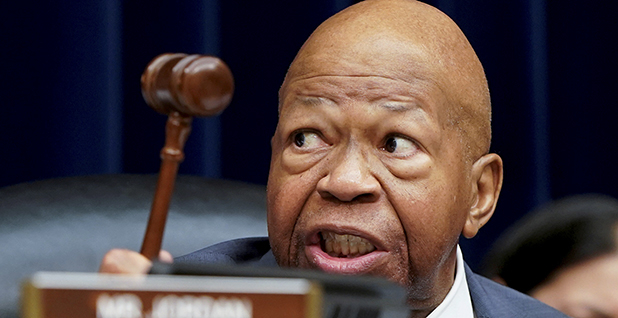 With the Trump White House and Congress inching closer to high-stakes legal fights over the limits of executive power, House and Senate Democrats are growing increasingly worried that oversight of key federal energy and environmental regulators may get swept into the standoff.

This week alone, the legislative and executive branches have clashed repeatedly over House Democrats’ oversight demands, with the House Judiciary Committee voting yesterday to hold Attorney General William Barr in contempt of Congress for not submitting the full unredacted Mueller report on Russia’s interference in the 2016 elections.

President Trump upped the ante in that fight by asserting executive privilege over the full report, a move that is expected to ultimately be resolved in court.

Trump this week also moved to block former White House counsel Don McGahn from testifying before the Judiciary Committee, prompting Chairman Jerrold Nadler (D-N.Y.) to warn that contempt charges are possible if he does not comply with a committee subpoena.

And House Ways and Means Chairman Richard Neal (D-Mass.) is weighing his next steps after Treasury Secretary Steven Mnuchin denied his request to turn over Trump’s tax returns, despite a provision in federal law requiring him to do so.

It’s unclear how any of the standoffs will be settled, but legal challenges are expected that could take many months or even years to resolve.

While Democrats have complained about the administration slow-walking their information requests, the committees that oversee EPA and the Interior and Energy departments have not yet had to issue subpoenas to compel testimony or documents.

But Democrats say Trump’s blanket vow to fight subpoenas and general dismissiveness of information requests is causing an erosion of the system of checks and balances enshrined in the Constitution.

"This gets to the heart of the relationship between Congress and the executive," Senate Minority Whip Dick Durbin (D-Ill.) told E&E News this week. "If we cannot subpoena documents and the president [impedes] witnesses, then oversight is diminished dramatically."

House Majority Leader Steny Hoyer (D-Md.) said yesterday Trump’s intransigence with Democrats is part of a broader plan to intimidate federal workers and others who disagree with his policies, including climate scientists.

"I don’t think there’s any doubt that the president has operated in a manner that his strategy is to try to intimidate any of his opponents or anybody who disagrees with him," he told reporters. "That’s his strategy, that’s his ‘Art of the Deal’ — intimidate; place fear in the minds of those to dissuade them from saying things honest that may be harmful to his interests or his opinions."

‘It’s not going to make it any easier’

Disagreements between the White House and Congress over routine oversight requests and witness testimony are hardly new.

EPA during the George W. Bush presidency refused congressional requests to provide cost-benefit analyses for its legislation to curb multipollutant emissions from power plants, as well as studies of a number of competing proposals from lawmakers.

One of the bills studied by EPA at the time was a measure crafted by Sens. Tom Carper (D-Del.) and Lamar Alexander (R-Tenn.), which would have been more effective in reducing emissions at less cost to industry than the administration’s proposal, Carper recalled to E&E News. He only saw that analysis after President Obama’s EPA turned over the documents to Congress.

But the Trump administration has regularly flouted routine information requests from Congress, with some officials resisting even appearing before lawmakers.

Earlier this year, Commerce Secretary Wilbur Ross raised eyebrows when he declined to appear before both the House and Senate Appropriations committees to defend his fiscal 2020 budget request.

"I just think there’s a reluctance to make information available to Congress," Sen. Ben Cardin (D-Md.) said this week. He added he expected "some spillover" from the Mueller and Trump tax return fights that will complicate Democrats’ efforts to obtain information from the administration. "It’s not going to make it any easier."

Now in his fourth term, Carper said he could not recall an instance where the White House Office of Management and Budget has declined to cooperate with agency inspector generals and the Government Accountability Office, citing an investigation into EPA’s proposed loophole for high-emission trucks (Greenwire, May 1).

"It’s one thing for the administration to say to oversight committees that I think have legitimate concerns about these issues, ‘we’re reluctant to share this information with you,’ but the idea of saying to inspector generals, ‘nope, you’re not going to get it,’ or to say to GAO, our fiscal watchdog, ‘we’re not going to turn stuff over to you,’ that clearly they have a right to, that’s not only bad in terms of public policy, it’s bad for our democracy."

Democrats on the House Energy and Commerce Committee said last month the agencies they oversee routinely slow-walk and provide nonresponsive answers to their information requests.

Rep. John Shimkus (R-Ill.), the ranking member on the panel’s Environment and Climate Change Subcommittee, said yesterday he knows what it’s like to be frustrated by a president from the other party.

"Listen, I wasn’t very kind to President Obama, that’s just the way it happens," he told E&E News. "Sometimes I was, but many times I was as aggressive as they are on Trump."

But Shimkus said he doesn’t want the brewing standoffs on other issues to disrupt the panel’s work.

"We’re just trying to get the facts and roll things out and try to keep the temperature calm," he said.

Republicans on the panel may be aided by EPA Administrator Andrew Wheeler — a honed Capitol Hill veteran — and Energy Secretary Rick Perry — who defuses tension with personal charm.

"They help the administration," Shimkus said, adding that if former EPA Administrator Scott Pruitt had stayed on in the role it might have led to broader legal fights. "That reconciled itself."

Senate Environment and Public Works Chairman John Barrasso (R-Wyo.) said this week the disputes between Democrats and Trump would not affect his committee’s work, including on oversight.

"We need to work responsibly and get things done for the country, and that’s what we’re going to continue to do," he said Tuesday.

Similar to Wheeler and Perry, newly confirmed Interior Secretary David Bernhardt has signaled he plans to work with members of both parties on the committees that oversee the department (Greenwire, May 6).

However, like his predecessor at Interior, Ryan Zinke, Bernhardt has found himself under fire over ethics. He’s also facing pressure from several House committees to turn over information or make department staff available for interviews.

Trump’s refusal to cooperate with House Democrats may embolden Interior employees to delay their response to those requests, one Democratic staffer said.

House Natural Resources Chairman Raúl Grijalva (D-Ariz.) told reporters last week that Bernhardt has refused to provide "basic information" to the committee, although he is not actively considering issuing a subpoena against the department at this point.

Grijalva has asked Bernhardt to testify before the panel three times this year, most recently before May 15. The first two times, Bernhardt, then acting secretary, declined.

But after making the rounds on Capitol Hill last week in private meetings with lawmakers, Bernhardt agreed to testify before the Natural Resources panel on the department’s fiscal 2020 budget and policy priorities (Greenwire, May 1).

Bernhardt’s immediate challenge lies with House Oversight and Reform Chairman Elijah Cummings (D-Md.), who this week gave the department until tomorrow to make four Interior employees available for interviews — or face the withholding of their pay (E&E News PM, May 7).

Cummings this week said Democrats will fight to hold Trump and his administration accountable.

"We’re not going to let up," he told reporters Tuesday night. "This is a fight for the soul of our democracy. We’re going to give it everything we got."