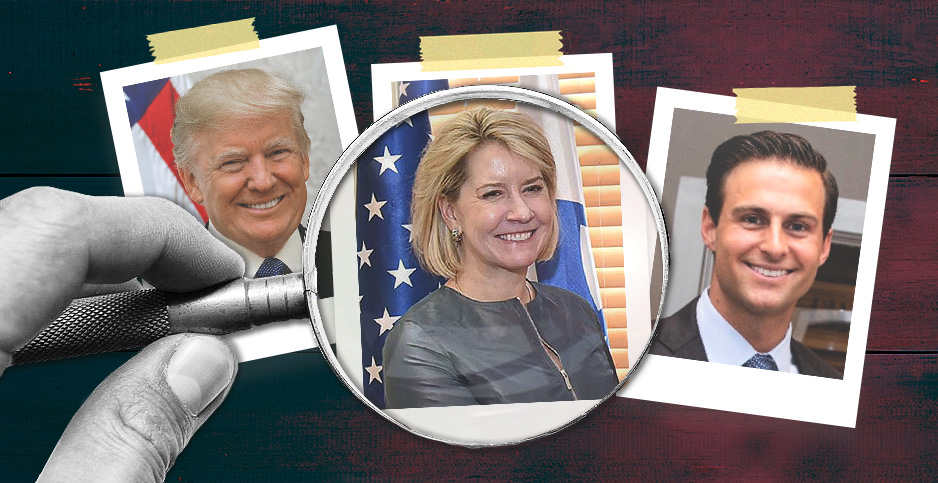 The Trump administration is reportedly scouring the federal government for employees deemed insufficiently loyal to the president. Leading the effort is Johnny McEntee (right), the new head of the Office of Presidential Personnel. Victoria Coates (center), a top official on the White House's National Security Council, has been reassigned to the Department of Energy. Claudine Hellmuth/E&E News (illustration); coyot/Pixabay (magnifying glass); Lukasz_Bachur/Freepik (background); Shealah Craighead/White House(Trump);State of Israel (Coates); Istalzer2/Wikipedia(McEntee)

President Trump is reportedly on the hunt for the so-called deep state across the federal government — including agencies that oversee everything from offshore drilling to hammering out energy policy.

Even if the administration’s search for "anti-Trump" employees doesn’t result in a reshuffling of political or career staff at the Energy Department or other agencies, experts are warning "deep state" rhetoric threatens to put a chill on the federal workforce. The term hints at a conspiracy theory in some conservative circles that a secretive group of bureaucrats exists and is determined to sabotage the Trump administration’s agenda.

"Whether these efforts result in a widespread purge or even just the fear that will happen, they threaten to undo protections for federal civil servants that have taken more than a century to build up," said Nick Schwellenbach, director of investigations at the watchdog group Project on Government Oversight.

"Those protections exist so public servants are empowered to follow the laws passed by Congress and make decisions based on facts and the broader public interest, rather than for the narrow political benefit of appointees, the president and their patrons," he said. "These efforts absolutely will create a more chilled work environment. Most feds will want to keep their heads down to survive."

That, according to one DOE career official who asked to remain anonymous, is what’s happening at the agency now.

"Most of the appointees here keep their head down and do anything they can to not be noticed," the career staffer said. "I anticipate that there will be little interest from the White House during their purge, but who knows?"

Trump acknowledged the search Tuesday, telling reporters at a press conference in India that he doesn’t believe it will involve a large number of employees — and that the country will be better off because of it.

"I don’t think it’s a big problem. I don’t think it’s very many people," Trump said, pointing to what he called the "fake" whistleblower who reported the president’s July 2019 phone call with Ukrainian President Volodymyr Zelenskiy, which uncovered Trump’s efforts to pressure Ukraine and led to his impeachment by the House.

"We want to have people that are good for the country, are loyal to our country, because that was a disgraceful situation," Trump said.

White House spokesman Hogan Gidley told Fox News in an interview Monday that it was "not a secret that we want people in positions that work with this president, not against him."

The search reportedly began when Trump appointed Johnny McEntee to oversee the Office of Presidential Personnel. According to an article in The New York Times, McEntee during a recent meeting called in White House liaisons from agencies for an introductory meeting last week, in which he asked them to identify political appointees across the government who are believed to be "anti-Trump." According to the newspaper, McEntee ordered a freeze on all political appointments across the government and informed colleagues he planned to tell Cabinet secretaries the White House would be choosing their deputies from now on. Axios reported that Trump has empowered McEntee to purge the "bad people" and "deep state."

But Gidley in the Fox interview suggested the White House was looking beyond political appointees who can be fired for any reason, saying the federal government "is massive with millions of people, and there are a lot of folks out there working against this president. If we find them, we will take appropriate action."

He said he had not seen any lists of targets. But Gidley noted that "time and time again, we see in the media reports from people in the bowels of the federal government working against this president." He accused them of "pushing their own selfish political agenda" rather than Trump’s.

DOE may have already seen the effect of Trump’s emphasis on loyalty.

Victoria Coates, a top official on the White House’s National Security Council, was reassigned to DOE as a senior adviser to Secretary Dan Brouillette. The White House announced the move last week amid renewed speculation over the identity of "Anonymous," the author of a 2019 tell-all book (Greenwire, Feb. 20).

A senior administration official rejected rumors that Coates was the author of "A Warning" or a related 2018 op-ed in The New York Times.

Agency officials, when asked about the potential for a political purge, either refuted that a hiring freeze was in place across the government or pivoted to double down on supporting the administration’s agenda.

While DOE, EPA and the Federal Energy Regulatory Commission declined to comment, Interior spokeswoman Carol Danko told E&E News that the department "has a diverse team of exceptional, dedicated appointees fully committed to advancing President Trump’s agenda for a stronger and better America." Scott Burnell, a spokesman for the Nuclear Regulatory Commission, said there is no freeze on the hiring of political staffers at the agency.

"They are certainly aware of it. They are fearful," she said.

Cantello added she wouldn’t be surprised if this effort comes down hard on managers and supervisors at EPA who have taken positions against the administration’s policies.

"If it’s occurring, it isn’t something they are going to give us any notice of. That’s not how this administration works," she said.

One EPA employee said their colleagues don’t mention working conditions or policies because they don’t know who is listening, adding senior career officials are following the administration in order not to be seen as obstructionist.

"My friends and I haven’t gone to lunch together in weeks because we are afraid of being targeted as ‘resistance employees,’" said the employee.

Another EPA employee said they thought Trump was looking for political appointees not on board with his agenda, noting most EPA employees identify as liberals or Democrats.

"If he really went after people, all of us would be fired," said the employee.

A former Obama administration DOE official, who asked for anonymity to speak about the subject, said most departments rely heavily on career senior executives who may not have some of the job protection extended to civil service employees. And he said the employees are essential for running an effective department.

"If they get to a point where they are retaliating against people, it could have negative consequences," the former official said. "If you want to get stuff done, you have to have the help and support of those senior career executives."

The official said that the standard for career professionals has always been "as long as you don’t take sides one way or another you are protected and safe and that has worked well since it started. The point has always been to avoid loyalty tests or expressions of ideology as a contingency for getting or keeping a job."

The Brookings Institution’s Kathryn Dunn Tenpas, who has been tracking turnover in the administration, called the push "pretty chilling" and unprecedented in that the administration has targeted its own, including Jessie Liu, a U.S. attorney who ran the office that oversaw the prosecution of Trump’s ally, Roger Stone. Liu resigned after her nomination for a top Treasury Department job was pulled.

"It’s not unusual for presidents to be suspect of the bureaucracy, but they’re generally not suspect of their own political appointees," she said. "You shouldn’t have to verify the loyalty of people that you hand-picked for these jobs."

Tenpas said she believes the problem stems from recruiting difficulties: Trump started with a small team and ruled out appointing a number of Republicans who didn’t support him.

"His pool of recruits was already shrinking," she said.

She noted President Nixon was "infamous for being skeptical and suspicious of the federal government" and that retired Army Gen. Stanley McChrystal was forced to resign in 2010 over critical comments he made about President Obama’s administration.

"But this notion that across the whole federal government you’re going to examine loyalty?" she said. "I don’t know how they’re going to do it systematically. Are they going to interview every political appointee or make them take a loyalty oath?"

Schwellenbach said it’s no surprise the administration is taking aim at agencies driven by science.

"There are wealthy interests that want to enfeeble government because they see government getting in the way when those interests put the health and safety of workers and the environment at risk and when they attempt to unduly profit, say from drilling or mining on public land, without paying their fair share," he said.

Schwellenbach noted that federal statutes protect employees from retaliation for blowing the whistle on not just waste, fraud and abuse, but also when there’s a reasonable belief that laws, rules or regulations are being violated or when there’s a substantial and specific threat to public health or safety.

Yet another statute protects federal employees who are witnesses to investigations by inspectors general or the Office of Special Counsel, as well as for refusing to obey an order when there’s a reasonable belief that the order violates a law, rule or regulation.

And another provision protects workers from being discriminated against because of politics or political affiliation.

"If agency management discriminates against civil servants who management deems out of line politically with the administration, then those employees may have a valid prohibited personnel practice claim if the discrimination results in adverse employment actions against them, such as a reassignment or termination," he said.

But the Trump administration has also been savvy, he said, using reductions in force and geographic relocations.

"Those efforts are extremely difficult to challenge under civil service laws," said Schwellenbach.

"But Congress, particularly members of the president’s own party, can put pressure on the White House to more informally shield these appointees," he said. "And Congress can use its oversight, appropriations and legislative powers to help protect both civil servants and appointees — for example, reductions in force and geographic relocations can be halted through legislation signed into law."

The energy sector has witnessed "deep state" rhetoric before.

In 2018, FERC dealt what some called a resounding defeat to the Trump administration’s proposal to compensate coal and nuclear plants for the stated reason of maintaining electric grid resilience.

That comment drew sharp backlash from agency watchers and academics who said FERC commissioners — two out of three of which were appointed by Trump — are not required to show loyalty to the administration. "That’s not at all why they exist," tweeted Joel Eisen, an energy law professor at the University of Richmond.

In other instances, one DOE official followed and "liked" tweets from Twitter user @qanon76. The account promoted the "QAnon" conspiracy theory that centers on an anonymous source known as Q, who is allegedly trying to tell the world about how Trump and other officials plan to arrest a number of "deep state" government officials in what followers call "The Storm" (Greenwire, Oct. 23, 2018).

EPA employees have also been the target of similar language.

In the piece, Breitbart published snippets of emails between John O’Grady, then a biochemist at EPA and president of AFGE Council 238, the agency’s largest union that represents thousands of its employees nationwide, and a reporter with The New York Times. O’Grady, according to the Breitbart story, forwarded the reporter’s request to more than two dozen EPA employees.

O’Grady, now retired, pushed back at the time when asked about accusations of a "deep state" or efforts within the government to undermine the Trump administration.

"Why would any decent American political official worry about the press getting ahold of something?" he asked at the time. "Are they not desiring to be transparent? Are they trying to do something that borders on the illegal?"