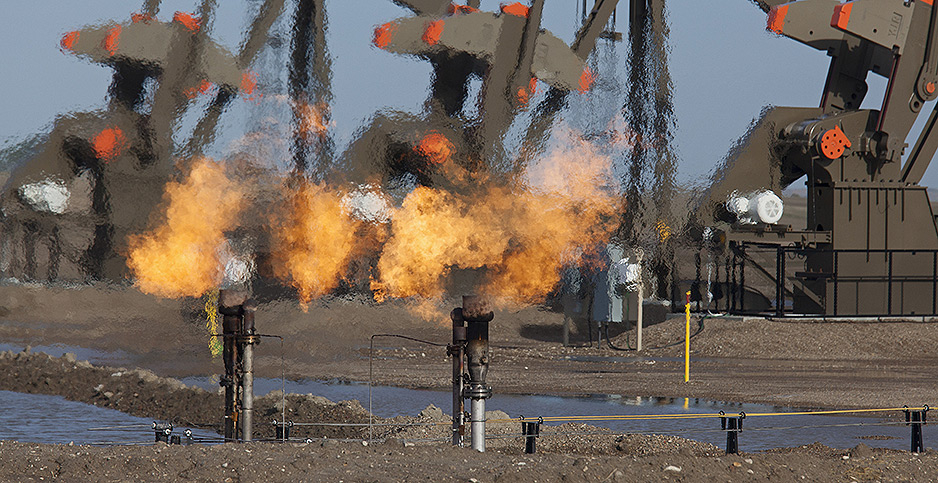 Legal experts warn that significant legal obstacles are ahead for EPA's rollback of methane regulations for the oil and gas sector. Jim West/agefotostock/Newscom

EPA’s rationale for its decision to stop directly regulating potent heat-trapping emissions from the oil and gas sector may contain fatal flaws that could cause the agency’s new standards to stumble in court, legal experts say.

Legal experts agree the agency’s cost-benefit analysis justifying the rule change will be a likely target of litigation, particularly in light of a recent district court ruling striking down the Trump administration’s approach to the social cost of methane, which puts a dollar figure on the harm caused by emissions of the greenhouse gas.

"The cost-benefit analysis, to me, is a central liability for this rule," said David Hayes, a former Interior Department official who now leads New York University’s State Energy & Environmental Impact Center. "It’s the reason why it cannot survive."

The Trump administration has drawn criticism for its use of an interim domestic social cost of methane estimate that only accounts for harm that occurs within the United States. Environmental groups say the approach vastly underestimates the damage caused by climate change globally, while making the cost savings of the rollback to industry look worthwhile.

Several environmental groups and at least one state have already vowed to sue.

During a call with reporters last week, a senior administration official dismissed concerns about the EPA rule’s alignment with a recent decision by the U.S. District Court for the Northern District of California that slammed the use of the domestic value in the Bureau of Land Management’s revised methane waste prevention rule for oil and gas operations on federal and tribal lands (Greenwire, July 16).

"The statutory construct we’re operating under is different," the official said.

While the analysis by Judge Yvonne Gonzalez Rogers, an Obama appointee to the U.S. District Court, wouldn’t set precedent for another bench, her "powerful reasoning" rejecting the domestic value for the social cost of methane can’t be ignored, he said.

"She explains why this is not best available science and that there is better available science, and it’s the force of that logic and those broader principles laid out in an almost identical factual context … that’s going to make it very difficult for this to stand," Hayes said.

Under its rule, the Trump administration jettisoned the requirement to regulate emissions of methane, a potent greenhouse gas, and instead only required operators to curb precursors to smog called volatile organic compounds (VOCs) for the production and processing segments of the industry.

In a separate technical rule, EPA also decreased the frequency with which companies need to check for and repair methane leaks. Low-production wells are exempt from compliance — a win for industry groups like the Independent Petroleum Association of America.

Taken together, the combination of moves will mean the standards only cover part of the oil and gas industry, said David Doniger, senior strategic director at the Natural Resources Defense Council’s climate and clean energy program.

Earthjustice said it will be reviewing EPA’s economic analysis for eliminating regulatory requirements under its technical leak detection and repair (LDAR) rule.

"EPA’s claim there was that LDAR requirements are not cost effective for low producing wells, but it hasn’t produced any evidence to support that claim," said Caitlin Miller, an associate attorney at Earthjustice.

The rule falls into the Trump administration’s pattern of finding ways to limit the scope of agency powers under the Clean Air Act to regulate planet-warming gases in years to come, said Hana Vizcarra, a staff attorney at Harvard Law School’s Environmental & Energy Law Program.

"It breaks with prior interpretation of the Clean Air Act in order to take a stance that could limit the ability of EPA to regulate greenhouse gas emissions from any source in the future," Vizcarra said.

EPA’s about-face on its definition of what methane sources actually get regulated under the new rule — particularly its exclusion of transportation and storage facilities — is a potential point for litigation, said Romany Webb, a senior fellow at Columbia Law School’s Sabin Center for Climate Change Law.

"I think there are some really good arguments to be made that EPA has not adequately justified that re-definition of the listing category, which really kind of is completely opposite to the position it took both in 2011 and in 2016," she said.

EPA’s rewrite of rules that raise the bar on what sources can be regulated will also likely be a target of lawsuits.

The agency has argued that it is required to establish a new "significance finding" or "endangerment finding" for each individual greenhouse gas emitted before it can be regulated under major source categories. Since EPA hadn’t previously taken that step, the agency said it could not move forward with regulating methane from the sector.

He dismissed the likelihood of challengers prevailing over the Trump administration.

"I don’t see it gaining traction in court," he wrote in an email.

EPA officials told reporters the agency is planning to draft a rulemaking on determining significance.

Such a dramatic change could make it harder to regulate the emissions of different pollutants, said Vizcarra of Harvard.

"What they’re doing [here] is making a legal argument that, in order to create emissions standards, EPA has to have found that that source category contributes significantly on that particular pollutant that they’re regulating," she said. "That’s not the way it’s previously been interpreted."

The move comes after EPA had provided a detailed analysis of how significantly emissions from the oil and gas industry contributed to climate change in 2016. Even before that, EPA had included methane as one of the six greenhouse gases in its endangerment finding, requiring the agency to regulate the potent gas, said Hayes.

"They are not pointing to any new evidence that the 2016 evaluation is not valid," he said.

EPA and supporters of the rollbacks have framed the decision as a means to eliminate "redundant" regulations.

But to make that case, EPA first has to limit how broadly regulations are allowed to apply to the industry by eliminating emissions requirements for the transmission and storage segments of the industry.

That laid the groundwork for eliminating its requirement under the Clean Air Act to extend methane regulation to existing sources, which produce the vast majority of sector emissions.

Those changes, and the reasoning behind them, are ripe for challenge, legal experts said.

"That’s very significant," Vizcarra noted. "There are a lot of emissions that come from there, and it’s part of the production of oil and gas. That’s a substantial limiting of where emissions standards will apply."

"It’s not the actual reason that EPA is pursuing rescission of the methane regulations," she said. "Its true motivation is to avoid its obligation to issue regulations for existing sources."

While environmentalists and government attorneys duke it out in court over the legality of EPA’s new methane standards, some experts say oil and gas companies could be left in the lurch if presumptive Democratic nominee Joe Biden is elected president and decides to overturn the rule.

EPA’s constant rollbacks are stressful for companies that spend a lot of time and money on their federal compliance standards, said Dorsey & Whitney partner Megan Houdeshel.

"The uncertainty in planning for how to comply, it costs a lot of time and money," she said. "Companies, though they may take advantage of less restrictions and less requirements for monitoring and otherwise right now, they’re worried about the uncertainty of whether they have to put them back in place."