Will Trump’s pipeline permit hold up in court? 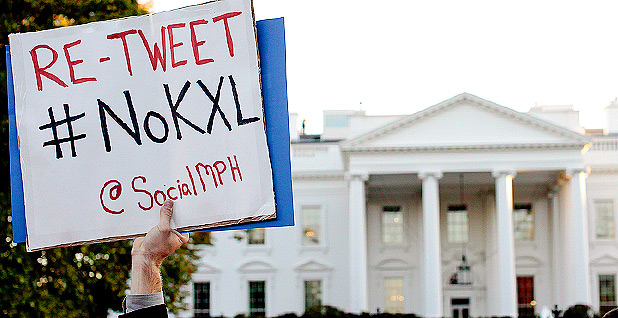 President Trump last week issued a new permit for the Keystone XL pipeline, sending ongoing litigation over the project into a tailspin. Emma Cassidy/Tars and Actiion/Flickr

President Trump last week attempted to take the fate of the Keystone XL pipeline into his own hands.

"It has been convention that agencies [with delegated presidential powers] have to follow the National Environmental Policy Act and all the federal laws that apply to agency action," said Alexandra Klass, an energy law professor at the University of Minnesota.

"When the president acts, those rules don’t apply."

Following orders from newly inaugurated Trump, the State Department in 2017 issued a permit allowing the pipeline, which would connect Albertan oil fields to the Gulf of Mexico, to cross the border between the United States and Canada.

The agency had considered the border crossing under the previous administration, but President Obama blocked the project in 2015.

This time around, the company could be in the position of defending presidential power over cross-border projects.

Trump’s revocation of the 2017 permit appears to derail proceedings initiated in the U.S. District Court for the District of Montana disputing the State Department’s authorization.

As part of that lawsuit, Judge Brian Morris last year issued a preliminary injunction blocking TransCanada from working on the pipeline until the agency revisits its review of climate, market and other impacts (Energywire, Nov. 9, 2018).

After a month of legal wrangling, Morris, an Obama appointee, said he would not accommodate TransCanada’s request to conduct certain preconstruction field activities, such as preparing work camps and off-site storage.

The case is now before the 9th U.S. Circuit Court of Appeals, which declined to thaw the construction freeze.

If the lawsuit and injunction are moot, TransCanada could begin work in August, ClearView Energy Partners LLC wrote Friday.

"It is not yet clear, however, whether today’s action changes TransCanada’s projection of a one-year delay for the KXL in-service date if the pre-construction injunction remained in force beyond March 15," ClearView analysts wrote.

Environmental challengers say they are still reviewing the permit and plotting next steps.

"The courts have ruled that this pipeline requires further analysis of oil spills and climate impacts," said Doug Hayes, senior attorney for the Sierra Club’s environmental law program and counsel in the Montana lawsuit. "This appears to be an attempt to ignore those requirements."

The State Department’s permit is just one of the federal approvals TransCanada must secure. Meanwhile, the agency has already issued its notice of intent to prepare the supplemental environmental impact statement Morris ordered.

"It’s unclear how this permit would change those processes," Hayes said. "There are a lot of unanswered questions at this point."

TransCanada did not respond to a request for comment on its next steps in the courtroom. The company or the Trump administration could cite the president’s permit in a request to lift the Morris injunction.

While Trump’s order attempts to circumvent questions about Keystone XL’s legality, the president instead may have introduced a new legal tangle for the project, said Center for Biological Diversity attorney Amy Atwood, a lawyer for environmentalists in the Montana lawsuit.

The permit is likely to be subject to a new round of litigation, although a formal challenge has not yet been filed.

Powers of the president

If Keystone XL opponents sue in Morris’ court, Trump’s approval could meet the same outcome as the State Department authorization.

"Presumably, this may not change anything," said James Coleman, an energy law professor at Southern Methodist University.

The legal precedent for questions of presidential power over border-crossing projects is murky, he said.

In a pair of George W. Bush-era lawsuits over the original Keystone pipeline, two district courts concluded presidential actions are not subject to NEPA or to the Administrative Procedure Act. The rulings never faced appellate review.

"Simply stated, an act need not be carried out by the President personally to constitute presidential action exempt from judicial review under the APA," Judge Richard Leon found in his 2009 dismissal of a challenge by the Natural Resources Defense Council and groups affected by the Keystone project.

Leon, a Bush pick, sits on the U.S. District Court for the District of Columbia.

"Now we’re seeing some pushback to that," said Coleman, who worked on those issues in his former role as an attorney at Sidley Austin LLP.

Early in the Montana litigation, Morris tossed arguments by the Trump administration that the court could not review presidential permits.

In a November 2017 order, the judge rejected the government’s motion to dismiss the case, noting that the State Department had previously referred to the issuance of a presidential permit as a "major Federal action."

"The logical conclusion to be drawn is that the State Department intended for the publication of the [record of decision/national interest determination] and the issuance of the accompanying Presidential Permit to be reviewable as final agency action," Morris wrote.

"Federal Defendants now attempt to recast the State Department’s original decision to comply with NEPA, as required for a major Federal action, into a policy choice, or ‘act of grace,’ to avoid judicial review."