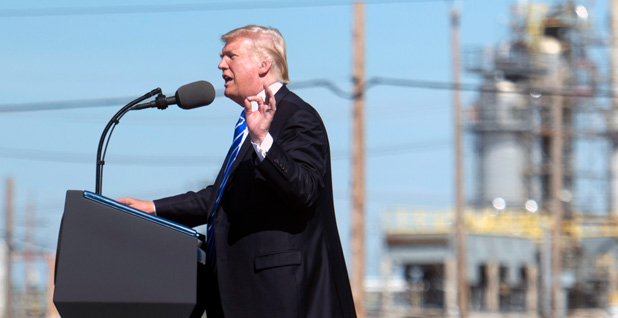 As a candidate, Donald Trump did not try to link his campaign battle cries together, except as pieces of an "America First" doctrine.

It was: Build the wall and make Mexico pay.

Save coal and "my coal miners."

But the links are being forged now in ways that President Trump has not sought, creating an energy policy in conflict with itself, according to Trump critics.

The renegotiation of NAFTA is one forge. The glut of U.S. natural gas production is another, according to panelists at an Atlantic Council conference last week.

U.S. Trade Representative Robert Lighthizer led his negotiating team to Mexico City for the second round of NAFTA talks, saying last week that progress is being made (Energywire, Sept. 6).

In an interview with reporters there, Lighthizer made it clear that Trump’s negotiating demands form a bottom line for the U.S. position. "So I expect that when I finish this agreement that the president will be supportive of it, because I’m not going to agree with things that he’s not supportive of," he said.

Trump, however, is still pouring gasoline on the talks, tweeting on Aug. 27, "With Mexico being one of the highest crime Nations in the world, we must have THE WALL. Mexico will pay for it through reimbursement/other." He followed that a few minutes later with, "We are in the NAFTA (worst trade deal ever made) renegotiation process with Mexico & Canada.Both being very difficult,may have to terminate?"

"By tweeting and bullying Mexico, Trump is all but hanging the death knell on NAFTA and all future cooperation in all areas [between] countries," Mexican diplomat Jorge Guajardo told The Wall Street Journal.

"He’s making it untenable for the Mexican government to reach any type of agreement with him because any agreement is measured not only on economic merits but on political merits," Guajardo said. "At this point, partnering with Trump is pure poison in Mexico."

Time will tell whether Trump’s ballistic approach to international negotiations will win concessions that benefit the U.S., but the panelists at the Atlantic Council conference predicted otherwise.

If NAFTA — begun under President Reagan and signed into law by President Clinton — is scrapped after nearly a quarter-century, or if it drifts into limbo, energy investment across the U.S.-Mexican economic bridge will be affected to both nations’ detriment, said David Goldwyn, the State Department’s special envoy on international energy issues in the Obama administration.

Deep-water drilling in the Gulf of Mexico is a case in point. "You’re talking about contracts where it’s $100 million, $200 million a well. You’re waiting eight years to make money," Goldwyn said. The agreements between oil companies and the Mexican government are complex with many requirements, he added. "It’s got a lot of things that can go wrong if somebody … decides to call you out. … Your whole contract could be rescinded for technical violations."

NAFTA provided an agreed-on forum for resolving disputes, and that certainty primed investment, he said. Without that security, Goldwyn added, "you’re not going to make that investment."

If NAFTA goes away, "my bet is you would see a dramatic drop-off in investment," Goldwyn said, and that would strike directly at the Trump goal of making the U.S. the Western Hemisphere’s Saudi Arabia.

NAFTA produced a huge surge in trade of all kinds across the U.S. southern border. In 1994, the year the treaty took effect, the U.S. exported $50.8 billion in goods while $49.5 billion in goods came from Mexico. Last year, $229 billion in goods entered Mexico from the U.S., while the U.S. imported $294 billion, a $64 billion deficit. That shift has made NAFTA a four-letter word in old U.S. manufacturing centers, where Trump’s campaign found fertile ground.

Energy, however, has been a growing plus for the U.S. ledger, with energy exports to Mexico topping $20 billion last year, more than twice the energy imports coming from Mexico. Goldwyn said the trade flows between the two nations continue to fit together more closely, as the highly efficient U.S. refining industry serves Mexico’s increasing market for gasoline and other petroleum products.

Whether a new NAFTA agreement would improve the U.S. deficit with Mexico long term is unknowable and moreover is the wrong question altogether, said another Atlantic Council panelist, economist Jeffrey Schott, a senior fellow at the pro-trade Peterson Institute for International Economics.

"The purpose of a trade agreement is to increase trade and investment. Full stop," Schott said. Investment increases efficiency of goods and services production, and from that, jobs follow, he added.

"The Trump White House is about the only place in the world that sees things differently," Schott added. Trade deficits are "a political symbol to them that the agreement is succeeding or failing. It doesn’t make any sense in economics."

It made sense politically for Trump in the 2016 campaign.

But that advantage is in jeopardy if NAFTA is scuttled, as trends in U.S. natural gas production reveal.

Starting with the opening last month of the Rover pipeline in Ohio, new pipeline connections are about to open up that will dramatically increase delivery capacity of natural gas from the Marcellus and Utica fracking formations, a detailed analysis last month by Jim Simpson of RBN Energy LLC spelled out.

Northeast gas producers say they expected a mammoth growth of 14.5 billion cubic feet per day by the end of 2019. Add potential jumps in gas production from Texas, Kansas, Colorado and Wyoming, and the U.S. could face an excess of supply over demand of nearly 9 billion cubic feet a day, pushing gas prices down well below $3 per thousand cubic feet, Simpson said.

Cheap gas is also a bane for older nuclear power plants that Trump and Energy Secretary Rick Perry are trying to shore up.

U.S. natural gas pipeline exports have doubled since 2009, according to the U.S. Energy Information Administration, almost all the growth taken in by Mexico, which is relying on U.S. gas to power its increasing electrification. (It isn’t just gas. U.S. gasoline exports now account for more than half of Mexico’s demand.)

"Frankly the survival of the U.S. gas industry depends on Mexico. It’s critical for the U.S.," Goldwyn said.

"There are lots of plans for expanded pipelines that will allow more exports of natural gas from the United States to Mexico," Schott said. "If there is any concern about destabilization in the bilateral relationship, investors will pull back, slow down or even reverse investment decisions."

Goldwyn said that wind and solar power are two other energy sources that can expand across the U.S.-Mexican border, if it opens further. Texas has wind energy to support over new power lines that await construction. And the U.S. is a leader in developing the digital controls and operations software that are becoming essential for grid operators on both sides of the border.

"There is tremendous potential [in expanded trade in renewable energy and systems controls]. But you’ve got to harmonize [technical standards]" and trading rules, Goldwyn said.

Increased exports of LNG from new U.S. terminals would also boost U.S. energy company profits and jobs, but that prospect is darkened by Trump’s threats to tighten restrictions on specialty steel from foreign producers.

"The essence of the contradiction is that the administration wants to grow domestic production of oil and gas by reducing regulation," Goldwyn said. "What we really need is markets overseas." The strong suits for the U.S. are cheap gas and efficient gas infrastructure. "Steel is an indispensable component of LNG infrastructure, and we don’t make [that] specialty steel," he added.