Will Warren’s plan push climate to the forefront? 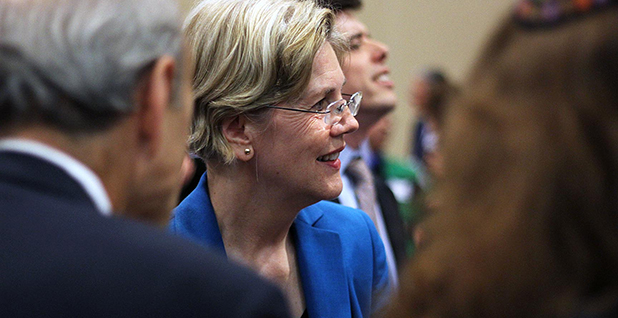 Elizabeth Warren’s pledge to stop new fossil fuel leases offshore and on federal land via an executive order is raising the bar for climate change policy in the presidential campaign and putting new pressure on the rest of the Democratic field to try to match her ambition.

It’s one of a series of thorough policy plans she’s released in recent weeks in areas such as child care, corporate profits and agriculture; her campaign website now sells a T-shirt that says, "Warren Has a Plan for That."

The public lands agenda seeks to recast the role of federal land away from fossil fuel development and toward other uses such as recreation. It’s also a significant climate plan; a U.S. Geological Survey analysis released last year found that fossil fuels extracted on public land accounted for about a quarter of the United States’ greenhouse gas emissions between 2005 and 2014.

Warren’s campaign said she would welcome a discussion of the subject if other candidates come out with plans of their own.

"Running for president means you know what’s broken, you put out credible ideas to fix the problems, and then you make the change," an aide told E&E News. "Her plan should be essential to achieving the goals of the Green New Deal and taking on our climate crisis head-on."

"We’re inviting other candidates to step up," he said. "We’re curious to see what else all the candidates have in store."

Representatives for the rest of the Democratic field largely didn’t respond to E&E News’ requests to weigh in on Warren’s plan. But some indicated they would be releasing more climate-related plans.

"Marianne Williamson believes any public land policy must not do further damage to our environment. Sen. Warren’s plan is a good template and a reasonable place to begin," said Patricia Ewing, spokeswoman for the author and activist.

Other candidates have in the past supported Sanders’ "Keep It in the Ground Act." Warren was a co-sponsor of the bill in its 2015 and 2017 iterations, as was Sen. Kirsten Gillibrand (D-N.Y.), another presidential hopeful.

Some of the candidates are likely to resist calls to stop federal fossil fuel leasing. Former Colorado Gov. John Hickenlooper has pushed back against attempts to stop fossil fuel production or aggressively regulate it, while former Texas Rep. Beto O’Rourke has turned down requests that he reject donations from oil and gas company employees.

John Ruple, a professor at the University of Utah’s S.J. Quinney College of Law, said Warren’s full plan for reimagining the role of public lands could have a significant audience in the West. She released it in advance of a campaign trip this week that took her to Colorado and Utah.

"We are more than ‘flyover’ states that fuel America’s energy economy and provide vacation hot spots for people from the coasts," Ruple said. "We are home to millions of Americans who care deeply about public lands and who want to hear a thoughtful vision that demonstrates an understanding of what public lands mean to our region and the diverse people who live here."

Warren’s proposal goes further than even some of the most outspoken environmental groups.

"We think you ought not to frack in certain places. When you frack you have to do it right. That’s everything from protecting groundwater to protecting the water that comes to the surface to having to deal with methane issues," said Jim Marston, vice president for political affairs at EDF Action, the advocacy arm of the environmental group.

"Sen. Warren’s plan is unrealistic and unlawful. Congress has specifically mandated oil and natural gas development on appropriate public lands, and an executive order cannot undo law that has been in place for decades," Kathleen Sgamma, president of the Western Energy Alliance, said in a statement.