Will wildfires make the election a climate race? 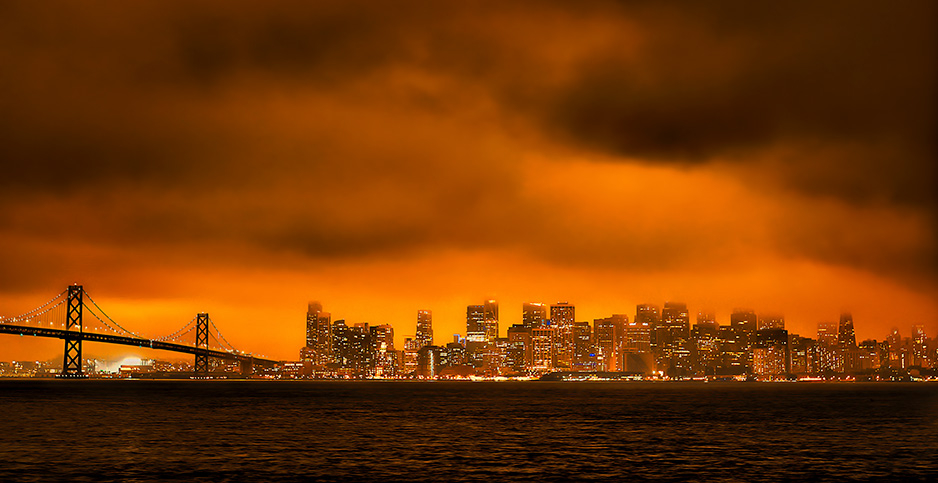 An outbreak of wildfires in California gave the San Francisco skyline an orange background this week. Reiner Mim/Flickr

Eerie orange light engulfed the Golden Gate Bridge and other California landmarks as smoke from myriad fires blocked the sun in San Francisco.

The apocalyptic scenes raised for some the importance of addressing climate change as broad stretches of the West Coast burn uncontrollably weeks before a presidential election promises to shape the nation’s environmental policies.

The blazes are already influencing the political race, with Democrats punctuating the connections between wildfires and rising temperatures, and Republicans accusing their opponents of supporting radical climate policies that result in widespread blackouts.

"The fires across the West Coast are just the latest examples of the very real ways our changing climate is changing our communities," former President Obama tweeted Wednesday. "Protecting our planet is on the ballot. Vote like your life depends on it — because it does."

The historic fires in California have killed 12 people since August. They burned a record 2.5 million acres and leveled more than 4,000 structures. In Washington state, the blazes destroyed Malden, a town of 200; in Oregon, they’ve driven tens of thousands of people from their homes and turned the skies red from smoke (Greenwire, Sept. 10). The amount of Oregon land scorched over the past three days is nearly double the amount burned in an entire year, on average, over the past decade, Gov. Kate Brown (D) said in a tweet yesterday.

President Trump has said little about the wildfires. He blamed California officials on Monday for rolling blackouts imposed a week earlier when electricity supplies fell short of demand.

"They’ve tried to go [green], and that’s just with a small portion going that route," Trump said of renewable energy. "That doesn’t work, and it can’t fire up our big plants."

House Energy and Commerce Committee Republicans doubled down on that messaging yesterday as fires burned all over the West Coast.

"California has sacrificed the reliability of their electric grid for radical climate policies — and California’s taxpayers are left with the monetary, environmental, and economic costs of this reality," committee Republicans said in a statement.

Climate change is an important issue to some voters, but Democrats must use caution in how they frame their political arguments during a natural disaster, said Eric Sondermann, a Colorado-based independent political analyst.

On Wednesday, Sen. Ed Markey (D-Mass.), an architect of the Green New Deal resolution, tweeted a picture of the orange sky in California and said, "This cannot become our new normal. Our land is on fire and our communities are suffering. We must pass a Green New Deal."

Sondermann argued Democrats instead should frame the issue as a crisis facing the country and the world, that the U.S. needs to be part of international agreements and that the country should add more renewable energy.

Sondermann said "the price is too high" to push the Green New Deal in moderate swing states. It could alienate working-class white voters who might vote for Biden, he said.

Mark Mellman, a Democratic pollster, said Democrats can point to fires in the West and hurricanes, floods and "all kinds of extreme weather, which is linked to climate change."

Arguments about acting on climate change fit with other anti-Trump messages Democrats can use, he said.

"People are very resentful of the way Trump has handled this, the same way he’s handled COVID, dismissing the science as a hoax and leaving the country and the world in much worse shape as a result," Mellman said. "There’s no question it fits into a larger narrative about the way Trump deals with science."

Action on climate change is particularly important to people who supported Sen. Bernie Sanders (I-Vt.) for president. They might have refused to vote in 2016 after Sanders lost the Democratic presidential primary contest to Hillary Clinton.

Democrats need to motivate those voters, many of whom are "captivated by this issue," Mellman added.

Environmental groups are beefing up their spending this election cycle, and climate change is part of the message, said Kevin Curtis, executive director of the Natural Resources Defense Council Action Fund.

"The fires join a growing list of natural catastrophes that are making it clear that climate change is here," Curtis said. "It’s grown in relevance because the impacts are more and more real. The fires are just one more example of it."