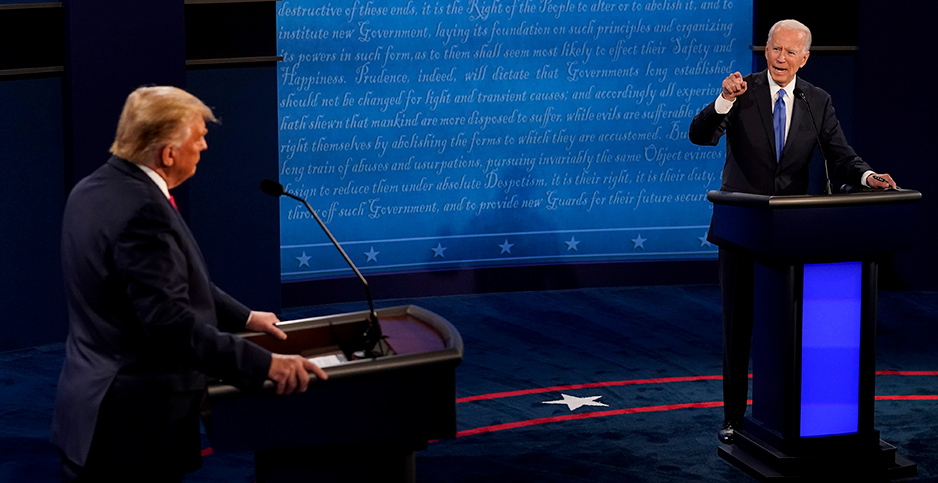 President Trump loves "beautiful" factories but is worried about "fumes" from wind turbines. Joe Biden wouldn’t ban fracking but wants to "transition" away from it.

Yesterday’s presidential debate saw one of the most substantive exchanges on climate policy in the history of general election matchups, largely because it’s an issue that rarely gets such valuable airtime.

The climate section of the roughly 90-minute event clocked in at about 10 minutes and delved into topics rarely heard on the presidential debate stage, just 12 days before the election.

That included brief discussions about environmental racism, the effects of manufacturing wind turbines and the plight of fence-line communities in polluted areas.

For the last 20 years, climate was absent from presidential debates in the general election. This year, amid a highly active hurricane season and record wildfires, climate change has become a major topic on par with health care, the economy and the coronavirus response.

Altogether, climate was discussed for more than 30 minutes between two debates with Trump and Biden, and one featuring their running mates Vice President Mike Pence and Democratic Sen. Kamala Harris of California.

The exchanges last night highlighted the stark differences between the two septuagenarians.

In one notable exchange, moderator Kristen Welker of NBC News asked the candidates how they would protect communities of color from industrial pollution.

"The families we are talking about are employed heavily and are making more money than they have ever made," Trump said about people who live near polluting chemical plants and oil refineries. "If you look at the numbers we produced for Hispanic or Black or Asian, it is nine times greater the percentage gained in three years than it was under eight years of the two of them."

In fact, studies have shown that people who live near industrial facilities don’t necessarily benefit from them and, more frequently, are hurt by the polluted air and water caused by the operation of the plants.

Biden responded that Trump "doesn’t understand" what a fence-line community is.

The debate, held at Belmont University in Nashville, was the final chance for Trump and Biden to use a national appearance to appeal to voters.

The event was decidedly more civil than their pugilistic matchup three weeks ago, with Welker quickly moving the candidates off familiar talking points. There appeared to be no breakout moments last night that threatened to shift the race in a meaningful way, and it was held at a time when more than 42 million Americans have already voted.

The Trump campaign complained earlier in the week that climate change had already been covered at previous debates and unsuccessfully pushed for it to be removed. Instead, Welker avoided the type of questions asked by previous moderators, Chris Wallace of Fox News and Susan Page of USA Today, both of whom pressed the candidates on whether they accepted climate science.

Instead, Welker asked the candidates what they planned to do about rising temperatures and its effect on families and the economy. Both candidates were able to roll out a few familiar zingers.

Trump again repeated his claims that he was an environmentalist who wanted clean air and clean water while preserving the economy.

"We are working so well with industry," Trump said, summing up his climate policy.

"It’s all a pipe dream, you want to kill the economy," Trump added.

Trump attacked Biden’s $2 trillion climate plan, which would strive to make the electric grid carbon free by 2035, and for investing heavily in renewable energy, which Trump said was unreliable, expensive and would cost energy industry jobs. He falsely claimed Biden’s plan would cost $100 trillion.

"I know more about wind than you do," Trump told Biden, suggesting that turbine manufacturing is dirtier than the drilling, transportation and production of natural gas. "If you’re a believer in carbon emissions, the fumes coming up is more than anything we’re talking about with natural gas."

Trump’s broadsides against Biden’s climate plan may not help him with swing voters. It’s one of the issues on which Biden enjoys widespread support from voters, according to a New York Times/Siena College poll released this week.

Biden’s $2 trillion plan to aggressively increase the nation’s reliance on clean energy is supported by 66% of respondents and opposed by 26%, the poll found. Support for fracking was evenly split, with 44% for it and 42% against it.

During the debate, Biden’s allies portrayed his climate policy as something that would add American jobs.

"When @JoeBiden thinks about climate change, he sees jobs," tweeted Gina McCarthy, who served as EPA administrator in the Obama administration. "When Trump does, he sees a hoax."

Trump has spent weeks highlighting Biden’s past comments about fracking, telling voters that Biden would shut down America’s energy industry. In March, Biden said in a primary debate that he would ban fracking but clarified afterward that he was only talking about a ban on federal lands.

The Trump campaign has run ads for weeks highlighting the blunder. On Tuesday, Trump played the ad at a rally in western Pennsylvania.

In one of the more significant exchanges last night, Biden suggested he supports ending the use of oil and gas in the future. That promises to be used against him in energy-rich battleground states like Pennsylvania.

"I would transition from the oil industry, yes," Biden said.

"It is a big statement," Biden said.

Trump’s allies immediately seized on the comment, offering it as proof that Biden wants to end the fracking industry. After the debate, Biden struggled to clean up the quote by saying he was talking about a transition that would happen over decades.

"Every Democrat incumbent & candidate in House races across the country must answer whether they agree with @JoeBiden that we should ‘end the oil industry,’" Rep. Liz Cheney (R-Wyo.) wrote on Twitter. "This is ludicrous policy that would devastate communities, eliminate millions of jobs & drive our economy into a depression."