Wind output to jump 37% because of climate shift — study 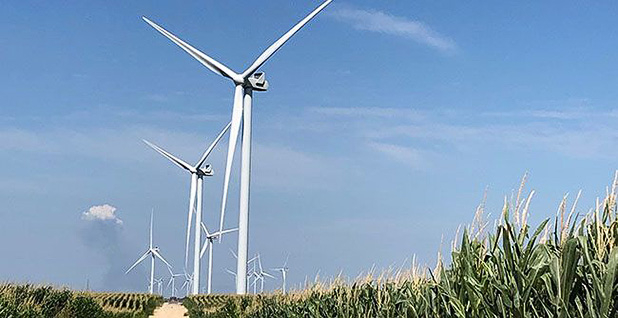 Average daily wind speeds are picking up across much of the globe, allowing wind turbines to increase output, according to a new study. Duke Energy

Global wind speeds are picking up after decades of stalling, creating the potential for wind turbines to increase average output 37% in the next five years, according to a new study.

The study, published yesterday in the journal Nature Climate Change, said the rise in wind speeds comes after three decades of a gradual slowing, a phenomenon called global terrestrial stilling.

Because of a pick-up in wind speed, researchers estimated that a typical wind turbine would have generated approximately 17% more energy in 2017 than in 2010. Average wind speeds in northern midlatitude regions — where most turbines are located — during the same time frame increased roughly 7%.

"These findings are important for those vested in maximizing the potential of wind as an alternative energy source," said the paper, which was led by a team at Princeton University. "The development of renewable energy sources, including wind power, is central to energy scenarios that keep warming below 2° C."

Researchers said the increase in wind speeds will continue for at least a decade, even though a response of large-scale "ocean-atmosphere oscillations" to man-made warming is unclear. The study found that these oscillations, which are naturally occurring cycles affecting sea surface temperature and precipitation, could be an explanation for the wind speed increase.

Although previous theories for global terrestrial stilling included urbanization, vegetation changes or both, the study found that it’s more likely that forces associated with "decadal variability of large-scale ocean-atmospheric circulations" are responsible for the wind speed variation.

The findings are "good news" for the power industry in the near future, and wind farms should be built in areas with stable winds and highly effective utilization hours, the authors said.

Building turbines with larger capacities could be justified if high wind speeds are likely to be common, researchers said. Still, depending on the capacity of the turbine, periods of high wind speed can also "waste" the uses of wind, the paper said.

David Solan, deputy assistant secretary for renewable power at the Department of Energy’s Office of Energy Efficiency and Renewable Energy, noted in an email that the average-size turbine deployed in the United States continues to grow taller and larger and uses lower specific power rotors, echoing a finding from an August agency report.

Those trends are likely to continue regardless of expectations related to future global wind speeds, he said.

Solan said yesterday that the authors of the study were careful to say that their findings should hold for at least a decade. "Such variations in annual wind are important considerations" for turbine design and the financial viability of wind plants, and — with "all else being equal" — an increase in average wind speed would hint at increased production potential and reduced wind energy costs, he said.

"But because wind velocity is only one of a large number of variables that play into wind energy’s competitiveness as a source of electricity generation, and because changes in wind velocity are likely to vary significantly by location, it is difficult to draw any firm conclusions regarding how the findings of the paper reflect on future wind energy potential," Solan added.

Steven Clarke, director of corporate clean energy leadership at Ceres, a sustainable investment advocacy group, said that while higher wind speeds in general account for greater output from wind projects, it is not always a direct correlation between higher speeds and electricity production. Facets such as wind shear, turbulence and wind speeds at hub height are also factored in, he said.

"With that being said, wind is one of the fastest-growing sources of electricity generation in the country, competitive with fossil fuels on a price basis, and could generate over 30% of the nation’s electricity with existing technology," Clarke said.

Clarke said that Ceres envisions wind energy, both onshore and offshore, continuing to play a key role in reducing greenhouse gas emissions from the power sector.

The researchers used wind speed data recorded at ground weather stations in North America, Europe and Asia between 1978 and 2017 to conduct their analysis.

"The reversal in global terrestrial stilling bodes well for the expansion of large-scale and efficient wind power generation systems in this mid-latitude countries in the near future," the study ended.