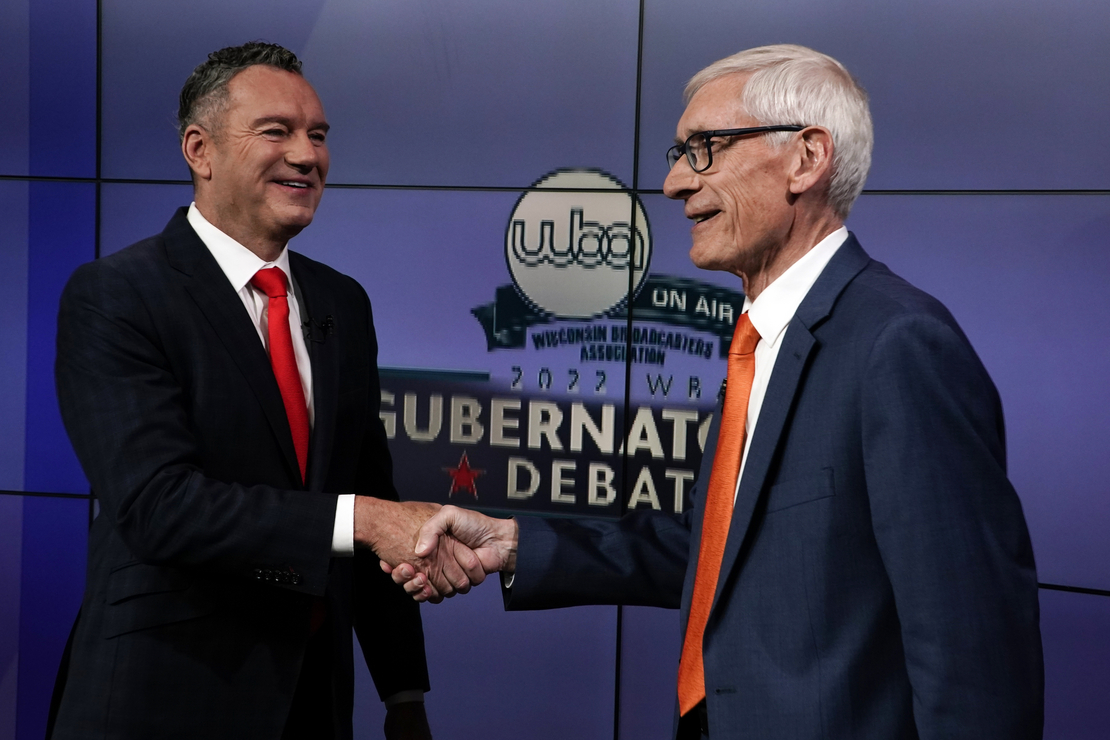 Wisconsin Gov. Tony Evers declared “science is back” after his upset election in 2018, and the former public-school teacher has made tackling climate change a policy priority since he took office.

But furthering the agenda will require Evers, a Democrat, to defeat Tim Michels, a Trump-backed Republican who disputes mainstream climate science and is blaming Evers and President Joe Biden for rising energy prices.

The race is among the tightest gubernatorial races in the country with the candidates separated by less than half a percentage point in recent polls.

Climate change and clean energy aren’t front-burner issues in the campaign, where abortion, education and the economy are center stage. But that doesn’t mask the fact that the outcome on Nov. 8 will shape Wisconsin’s energy future.

One area where the election is likely to have an immediate impact: control of the state’s Public Service Commission, a three-member panel that regulates utilities. In some states, political control of utility commissions matters little. Not so in hyperpartisan Wisconsin, where key issues have been decided along party lines and Evers and the Republican Legislature have sparred over who serves on the PSC.

“It’s so consequential to long term energy choices in the state,” said Gregory Nemet, a professor at the La Follette School of Public Affairs at the University of Wisconsin, Madison. “And it’s all in the hands of two people [who make up] the majority of the commission.”

That’s true today more than ever with the federal Inflation Reduction Act, which offers billions of dollars to utilities and energy developers to accelerate the transition away from fossil fuels by incentivizing deployment of carbon-free energy and electrification of transportation.

The extent to which Wisconsin utilities can leverage those billions will be dictated by the PSC, which must permit large renewable energy projects and allow companies to recover costs from consumers.

Already, political tension is brewing over the PSC’s makeup and how it could affect a key case pending at the commission.

The Midwest Renewable Energy Association and Vote Solar petitioned the PSC in May to declare that third-party financed rooftop solar and battery storage systems aren’t defined as “public utilities” under state law, and therefore don’t infringe on a utility’s monopoly service right.

Utilities have pushed back, stating the commission once before declined to open a docket on the same topic and arguing that such a ruling would create a “new class of unregulated public utilities” in the state. They argued the issue is one for the Wisconsin Legislature to decide.

While the case continues to play out in pleadings at the PSC, the timing of the case — set to be decided by Dec. 1 — has also become a contested issue both among parties involved and the commissioners.

The reason? Under the existing schedule, reaffirmed by a 2-1 PSC vote last week, the majority deciding the controversial case would be Evers appointees. If a decision was postponed until Jan. 3, Republicans could decide the case if Michels wins.

That means a Michels victory could quickly translate to a Republican majority on the PSC, said Michael Vickerman, policy director at Renew Wisconsin.

“If Michels wins, no doubt he would inform Tyler that he’s planning to appoint another person to that seat,” Vickerman said in an interview.

It’s not just observers speculating about the timing of the case.

Commissioner Ellen Nowak, who was reappointed to the PSC by former Republican Gov. Scott Walker, voted against opening dockets in the matter, saying the issue is one that should be decided by the Legislature.

Nowak, who has openly criticized Evers’ energy policy, also railed against the commission’s decision to decide the case by Dec. 1.

“Why the need to decide this before the end of the year? Why wouldn’t January 4, 2023 or later serve as an acceptable time?” she wrote in a dissent to the PSC’s July 25 order opening the case. “The answer is obvious. The commission made a purely political decision.”

Nowak had her own scrape with the Evers administration not long after the governor took office — one ultimately decided in her favor by the state’s high court.

The lone Republican PSC member was among 82 people whose appointments by Walker were rescinded by Evers in 2019 following a state court ruling. It found that the lame-duck legislative session where the appointees were confirmed by the Wisconsin Senate was convened illegally.

The Wisconsin Supreme Court later ruled that the appointees could return to work, and a lawsuit challenging the validity of the legislative session was later dismissed by the court.

The decision left the PSC with a Republican majority for one of the most watched cases during Evers term: 2-1 approval of a 625-megawatt natural-gas-fired power plant in Superior, Wis. The lone Evers appointee on the commission, Chair Rebecca Cameron Valcq, dissented.

The Evers campaign declined to make a spokesperson available for an interview, and the Michels campaign didn’t respond to emails.

In a statement, Evers campaign spokesperson Kayla Anderson touted the Democrat’s commitment to “protecting Wisconsin’s environment, public lands, and natural resources while building a strong and healthy future for all.”

Anderson highlighted Evers’ Clean Energy Plan issued in April, which is an outline for how the state can transition to 100-percent carbon-free energy by 2050 and meet goals of the 2015 Paris Climate Agreement.

The plan is the culmination of three years of work by the Evers administration, work that included creation of a Task Force on Climate Change led by Lt. Gov. Mandela Barnes, the Democratic nominee for U.S. Senate.

Like the makeup of the PSC, however, the fate of the Clean Energy Plan and the rest of the Evers climate agenda, which so far has been executed in a series of executive orders, likely rests with next month’s election, according to Vickerman of Renew Wisconsin.

In the lone debate between the candidates on Friday, Evers vowed that if reelected he’ll continue his administration’s work under the energy plan to deploy more solar in Wisconsin as well as take steps to mitigate the effects of climate change.

“Temperature has always fluctuated throughout the history of this world and we can’t just say it’s all happened because of man’s actions in the last 100 years,” he said.

While Democrats continue to rank climate change as a bigger concern by Republicans, the concern among conservative voters represents an important shift, according to Nemet, the professor.

“It’s really a function of two things. One is the problem is getting worse in very apparent and impossible to ignore, especially for rural voters,” Nemet said. The other, he said, relates to climate solutions, namely renewable energy technology, which is improving and getting cheaper to deploy.

“There’s a lot more reason, even for people who are worried about government doing too much, to actually say we should do something about [climate] now.”